In U.S. Virgin Islands, it’s a long way back to ‘normal’ 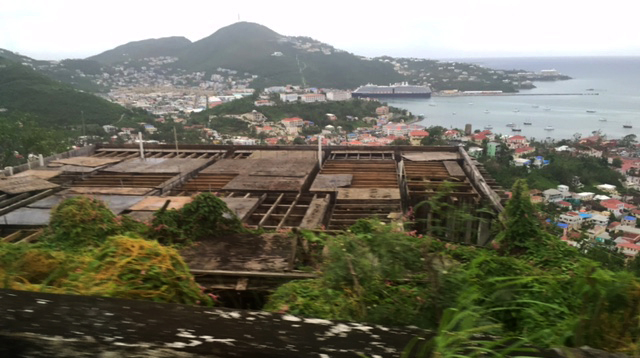 Even as boats ply the harbor again and life is returning to the hillsides, the roofs of many houses like this one in the U.S. Virgin Islands remain devastated after two Category 5 hurricanes hit the Caribbean islands last September. (Photos by Renee Hudson Small)

Hudson Small has assumed a leadership role in the islands’ recovery, and is on her third deployment to assist with disaster relief. The following is her reflection from her work there.

No matter your religious affiliation, God is the central presence in all our lives. The past few days has reminded me of his power and grace.

As I look at this amazing creation from God, I am struck with the current contrast. The ocean is so beautiful and peaceful. You get lost in your thoughts, just looking out into its endless beauty.

But just a couple of months ago, this ocean was powerful and furious. Rising above tree tops, washing out roadways, forcing mountains to shed their sides, causing some boats to capsize and others to settle on land, some homes to lose their roofs while others collapsed altogether, as water and winds raced through buildings without asking permission. 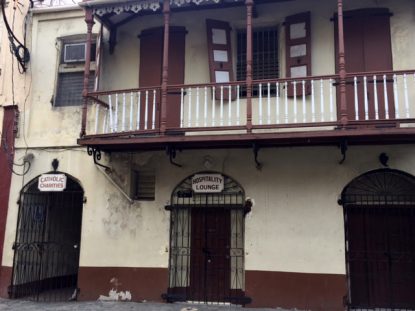 A Catholic Charities house is intact but still has no electrical power two months after Hurricane Irma hit the islands.

Whereas today some parts of the island have power, other parts live in darkness while others operate with a generator that only gives limited relief — like the Catholic Charities office that currently “operates” on a generator. But there is not enough power to operate the air conditioner (temperatures are in the mid-80s). The telephone system and internet service remain inoperable which makes communication quite a task.

Residents are seeking battery-operated fans because they don’t want to sleep with the generators running. This is understandable since they are loud and the smell of gasoline permeates the air.

Many shelters are beginning to close as residents return to what is left of their homes. Some homes are receiving repairs, others are too far gone and are being condemned, while other homes sit untouched.

There are hundreds of linemen from the states here working feverishly to restore electricity. However, their trucks are no match for these mountains. Driving up the mountainous terrain of St. Thomas makes driving a tractor trailer up the hills of Manayunk look like a practice course. I’m holding my breath as the staff takes the curves on the wrong side of the road (driving on the left).

Other parts of the roads resemble the streets of Philadelphia during the spring after a hard winter of snow plows and salt trucks. It is an obstacle course or leapfrog — the car against the potholes, and sometimes the potholes win. Stores are open, but the demand is definitely greater than the supply.

Loved ones and generous strangers are mailing supplies but some of the mail goes through Puerto Rico, which has its own set of challenges after the hurricanes.

One might believe the homes at the highest points were safer, as we are often told to go to higher ground. But Mother Nature took on many forms to attack the terrains of the island. The lower lying areas may have been hit by the ocean and wind, but the higher terrains were hit by wind of unimageable force and unrelenting rain. Think of those movies where the airplane is damaged, causing a hole, then chairs, supplies and passengers get sucked from the plane.

One of the Catholic Charities staff here described her family’s experience. Her family was riding out the storm in their living room, and as the storm began to get worse, they decided to move to one of the smaller bedrooms. As they were turning the hallway there was a loud boom. She and her husband looked back, and the front door had blown off and their belongings were being sucked out of the house. They made it to the bedroom just in time.

This experience has caused her to re-think staying put the next time a Category 4 storm is announced. She might evacuate, although everyone can’t afford that option.

She still doesn’t have power. One of the FEMA (Federal Emergency Management Agency) workers spoke of an elderly gentleman that came for help because his house had “simply” blown away. It was no longer where it once was and there were no signs of it.

Today, St. Thomas’ scenery is showing signs of life as the mountain sides are becoming greener with each passing day. But as someone pointed out to me, “nature is trying to trick us into believing everything is back to “normal.”

However even though the grass is greener, life here has a long journey to “normal” and whatever that may mean or look like in the future. 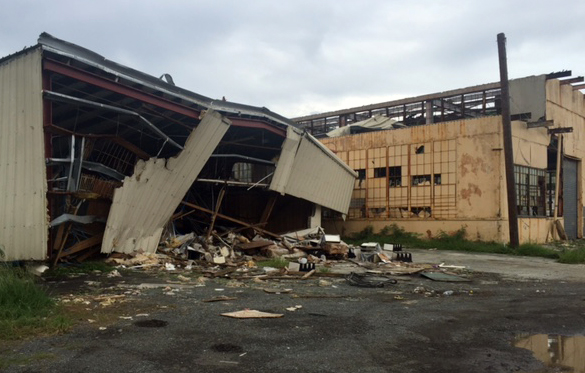 Many buildings such as these were damaged or destroyed as the low-pressure hurricanes and their winds battered the structures’ facades and sucked out the contents.

PREVIOUS: In one hand shake, lifelong gratitude for being Catholic

NEXT: Post-Columbine youths being raised on America’s battlefields