The spy who taught me: Catholic school pays off in CIA career 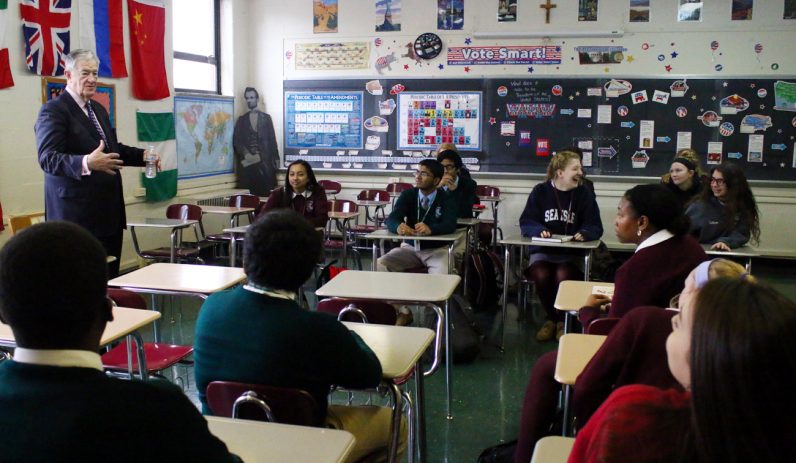 Jack Devine (left), a former CIA agent, speaks about his experiences to students at his alma mater, Msgr. Bonner and Archbishop Prendergast High School in Drexel Hill on Nov. 9. (Photo by Sarah Webb)

It was 1973, and Jack Devine was working at the U.S. Embassy in Santiago, Chile when he got word from his wife, Pat. There was a huge explosion in their yard that tore off some of the siding from the house.

He advised her to take the five children up to the attic for safety and he told her where he had a sawed-off shotgun hidden. If anyone tried to break in she should shoot. “Aim for the chest not the head,” he advised, because she might miss and just shoot the fence.

Meanwhile, he couldn’t leave his post because a coup d’état was in process but he arranged for someone to go and pick the family up and bring them to the embassy. As it turned out the bomb or rocket was meant for the house next door.

Later Pat asked him how she should reload the shotgun if it became necessary. That’s the kind of wife you need if you are a CIA operative, and that is what Devine was at the time and in charge of covert operations in Chile.

The U.S. was not sympathetic to the pro-Russian government in Chile, which was headed by Salvatore Allende who committed suicide after the successful coup.

Devine’s stories on U.S. involvement in politics and skullduggery in other countries whose governments America doesn’t favor make the reported involvement of Russia in the 2016 presidential election sound downright amateurish. 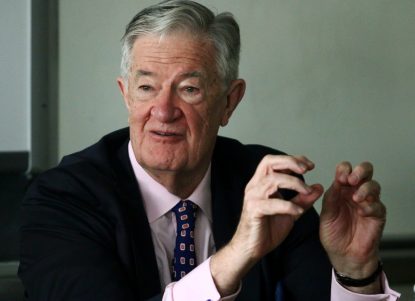 Jack Devine tells of his experiences as a career CIA operative, and the values from Bonner-Prendie that served him in his work. (Sarah Webb)

Devine told his story at school assembly at Msgr. Bonner and Archbishop Prendergast High School on Thursday, Nov. 9. He happens to be a 1958 Bonner grad and was a teacher at the school from 1963 to 1965 before being recruited by the CIA in 1967. He underwent five months of spy training and another five months of paramilitary training.

After multiple assignments he rose to the rank of associate director and acting director of operations before his 1999 retirement from the government. But he continued working in the intelligence world in the private sector.

“We inducted him into our Hall of Fame last year and he was at the top of our list,” said Scott Freeman, director of advancement at Bonner-Prendie. “He did a great job and when we asked he immediately agreed to come to this assembly.”

Other highlights of Devine’s career include taking charge of directing assistance to the Mujahideen fighters in Afghanistan during the successful resistance to Soviet occupation in the 1980s and overseeing the capture of Pablo Escobar, the notorious head of the Medellin Drug Cartel in Colombia, in the 1990s.

The Afghan operation in the late 1980s was huge. “I had to support 120,000 Mujahideen fighters,” Devine recalled. “I had to obtain Soviet-style weapons because that was the ammunition available. I had to supply trucks and 9,000 mules.”

The turning point came when he supplied the Mujahideen with highly portable Stinger surface-to-air missiles that were very effective against Russian helicopters.

The Russians ultimately left Afghanistan, but they were replaced by   the excesses of the fundamentalist Muslim regimes of Al-Qaida and the Taliban that followed. Devine wonders if it was a real victory.

“We thought we were supporting democracy and as time goes by I realize we were wrong. Each country must take charge of its own destiny,” he said.

An easier assignment followed in which he was Head of Station in Rome, where he became friends with Philadelphia’s own Archbishop (later Cardinal) John Foley who was president of the Pontifical Council for Social Communications.

Through Archbishop Foley he got a ticket to Pope John Paul II’s private Mass, one of about 18 people that day. 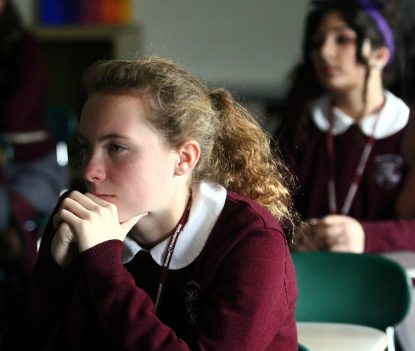 After the Mass, the pope shook each person’s hand. When he came to Devine the pope asked what his occupation was. He was in a quandary: he couldn’t tell the pope he was a spy because that is forbidden.

“If I told him the truth I would flunk my next lie detector test. If I lied to him I would go to hell,” he said. “This is where my guardian angel came in. I told him I worked at the embassy. I think there was a twinkle in his eye.”

There are contradictions in the work of the CIA, he explained. Although agents are bound to obey the laws in America, abroad they are expected to break the laws of other countries. It is the nature of spying.

“We are empowered to break other people’s laws, manipulate other people and create revolution if necessary,” he said.

He does not believe in torture, or to use the euphemism, “enhanced interrogation.” But does this hold absolutely in every case?

He points to the classic scenario: there is a busload of children that will be blown up if you can’t intercept it. Should you use enhanced interrogation to save the children? For Devine the answer is yes.

“Even though what we did in the CIA caused me a few moments of angst, I was able to hold my ground because I had a value system,” he said. “When I had to make life-and-death decisions I did not have time to think about it.

“I can tell you Bonner allowed me to retain my sanity because I had a value system. If you don’t and you are in an institution with great power, secret power, the capacity for corruption is huge.”

It still bothers him that one man with whom he worked, Aldrich Ames, sold out to the Soviet Union causing the deaths of a number of operators in that country as well as expenses incurred through the disinformation he generated.

“You won’t get it out of a single teacher or a single class,” he told the Bonner-Prendie students, “but in your four years at this institution I promise you it will help you make life decisions on how to deal with people in every situation.” 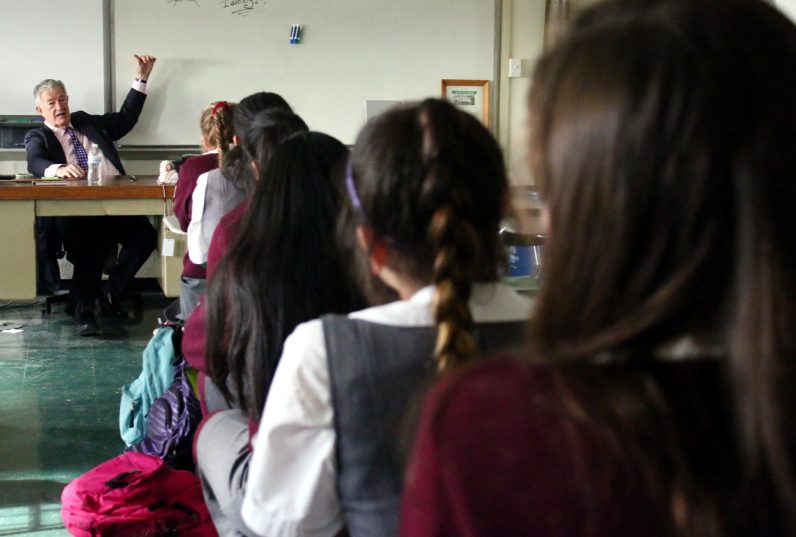 Jack Devine tells of the values he learned as a student at Msgr. Bonner and Archbishop Prendergast High School where he visited Nov. 9. (Sarah Webb)

NEXT: It’s not heaven, but New Jerusalem Now is saving addicts’ lives