Raised Catholic then lapsed, she now has ‘a love affair with God’ 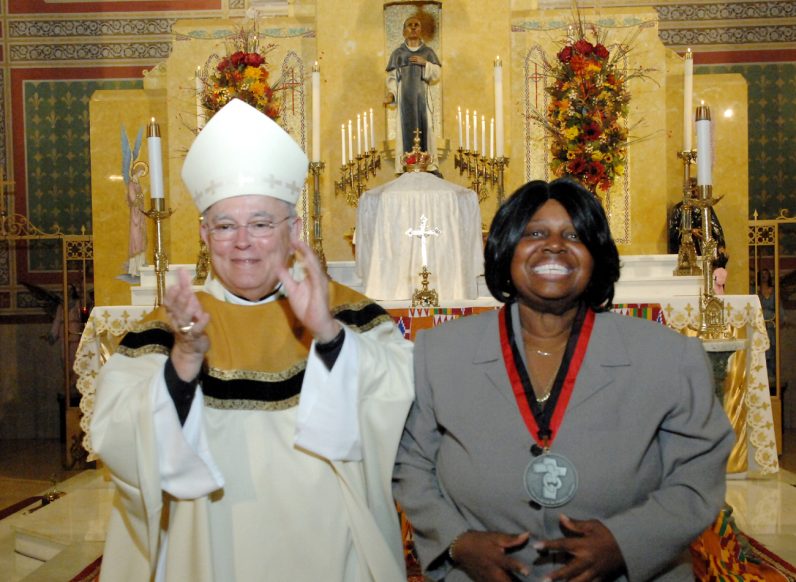 As part of the celebration, the St. Martin de Porres Medal was presented to Cynthia Brown of Our Lady of Hope Parish as a “Catholic leader who advances Catholic values and community engagement.”

(Read all about the Mass and see our photo gallery of scenes from it.)

All of this activity has happened within the last decade or so. When Brown decided to get involved, she hit the ground running.

To start at the beginning, Cynthia grew up in the former Holy Child Parish, the predecessor to Our Lady of Hope, and that’s where she attended elementary school. Although she and her brother were birth Catholics their parents were converts.

Jackson and Olivia Brown came North during the Great Migration and met and married in 1950 in Philadelphia. Both were Protestant at the time, and as a matter of fact Cynthia’s paternal grandfather was a Baptist minister.

Jackson Brown was a blue collar worker with truck manufacturer Eaton, Yale & Towne, and while Olivia had a nursing certificate she elected to be a stay-at-home mom. She was introduced to the Catholic faith through her beautician, who was a member of St. Benedict Parish. She liked what she saw, and she and her husband became Catholic and active members of Holy Child Parish.

They raised their children Catholic and after Holy Child School, Cynthia went on to the former Melrose Academy that was conducted by the Grey Nuns of the Sacred Heart. After her 1975 graduation she went on to the University of Pennsylvania and studies in business and anthropology followed by a career in sales, marketing and fundraising.

As happens so often with young people during her college years she drifted away from the practice of her faith. It wasn’t a matter of joining another faith, she simply stopped going to church. Meanwhile her parents remained staunch Catholics, attending Mass regularly at Holy Child and its successor Our Lady of Hope until old age inhibited that.

As they aged, Brown would occasionally take her beloved parents to church and after her mom died in 1991 she continued the practice with her dad, a man who never missed saying his prayers at night.

It was after his death in 2005 that she resolved, if for no other reason than to honor his memory, to return to the practice of the faith. Although she lives in the Valley Forge area she opted to return to her roots at Our Lady of Hope for worship.

Coming back to the faith after a long period away was almost like being a convert and Brown has the fervor of a convert. Father Efren Esmilla, her pastor, didn’t ask her permission, he simply appointed her to various committees. She obeyed and has happily served ever since.

A true revelation for her was attending the 2012 National Black Catholic Congress in Indianapolis where she encountered 2,200 Black Catholics all on fire for the Lord.

“It was overwhelming,” she said. “I was in shock seeing all of these people committed to the faith.”

Musing on her journey, Brown said, “It has been fulfilling. I feel complete. The Catholic Church has helped so many people. It has been a homecoming with the Lord and a love affair with God.”

With that said, having been almost lost to the faith herself, she is well aware of the challenges young Black Catholics face, possibly even more so than young Caucasians because they live in a culture that is predominately Protestant. Many young black Catholics marry Protestants and become Protestant.

But her parents gave her not only her faith but social values worth preserving.

“Just because of my shade of color doesn’t mean I shouldn’t be able to conjugate a verb or speak proper English,” she said. “You go out where there are opportunities and act upon them. No one promises you a rose garden, but you have to go out and do the right thing. Don’t tell me what you can’t do, tell me what you can do.

“My Dad and Mom believed in hard work and they believed in God. Because of all the sacrifices our parents made we have to give back to the community and respect God.”

NEXT: From South Philly to corporate suite, Valletta’s business is helping people