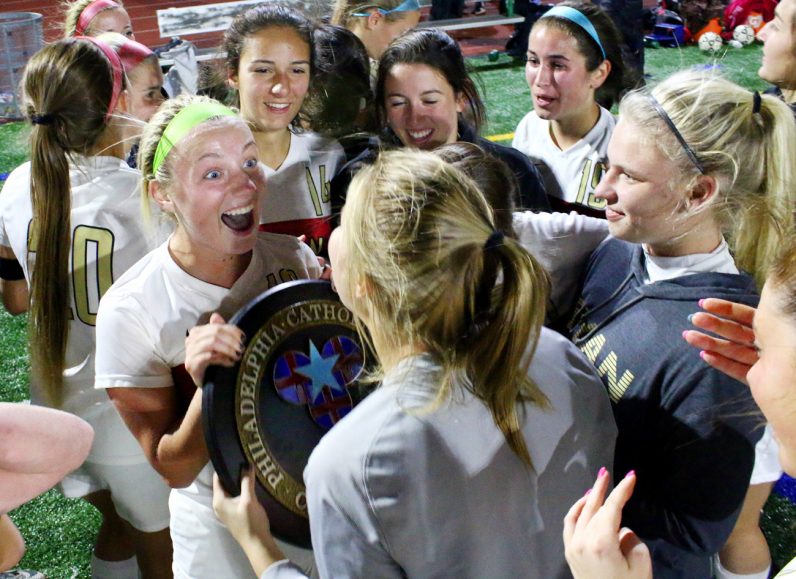 The four captains stood side by side. Behind them, teammates celebrated with family and classmates by sharing hugs, tears and picture-taking.

Archbishop Ryan’s girls had just defeated Lansdale Catholic, 1-0, in the Catholic League girls’ soccer championship Oct. 30 at Northeast High School. (View a photo gallery from the game here.) So how did the Ragdoll seniors feel?

“They used all the good words,” said Priscilla Walsh. “You really can’t describe this.”

After being eliminated in the semifinals last year, the returning Ragdolls stated time and again that their main goal this fall was to bring the prestigious championship plaque to Academy Road in Northeast Philly.

They certainly did their part in the regular season. Then again, so did Lansdale Catholic. Both teams finished undefeated at 10-0-1, the lone blemish a 1-1, double-overtime tie between the two squads on Sept. 21.

“This is the best moment of my entire life,” said senior Kaitlyn Findlay, who came close to scoring on several occasions. “We worked so hard for this the entire year. I am so proud to be a part of this. I’m so proud of my team.

“In the preseason, we started going to the weight room. We were practicing two-a-days. We were set on getting this plaque back. All of the hard work has paid off.”

After a back-and-forth first half, Ryan finally broke through early in the second half when sophomore Gianna Monaco took a feed from Findlay and connected for what would prove to be the winning goal.

Now in desperation mode, the Crusaders pressed during several stints but rarely gave Ryan a major scare. Time was ticking away very quickly for Lansdale Catholic, but ever so slowly for Archbishop Ryan.

During the game’s final five minutes, Monaco knew that Ryan had a lock on the lead.

“We were keeping them in the corner and they weren’t getting many opportunities,” she said. “Our defense was doing such a great job, and I just like felt it.”

“No one really believed in us this season,” said McDonald. “We believed in ourselves, and that’s why we won.”

As for a possible repeat, the underclassmen got some advice from their senior teammates.

NEXT: Late goal sends field hockey final into OT, where Prendie wins it