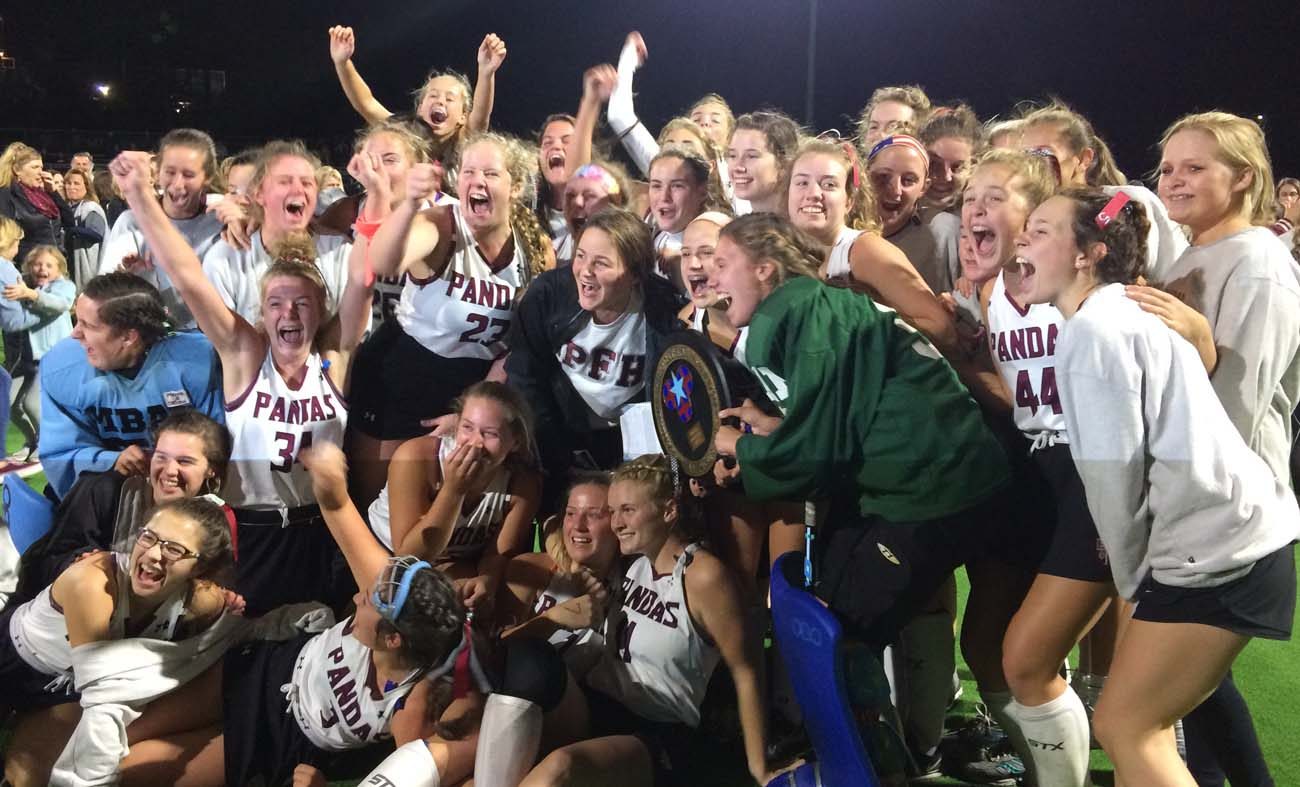 Bonner-Prendergast's girls celebrate their Catholic League field hockey championship with a 3-2 win over Archbishop Carroll Nov. 3 at the Proving Grounds in Conshohocken. (Photo by Dan McCarty)

The game went to overtime for nearly two minutes before Prendie ultimately edged Carroll, 3-2, to take home the Catholic League trophy for the first time since 2009.

Carroll held a 2-1 advantage for the majority of the second half and was looking ahead to the league crown. But Prendie wasn’t giving up, and forward Allison Martin found the open net with 17.3 seconds on the clock to tie the score and keep the match alive.

Going into overtime, the outcome could have gone one way or the other. Prendie forward Carly Brosious simply did her job and scored at 1:39 in overtime, and the Pandas began their victory celebration.

“That was an amazing feeling,” said Brosious. “It was an all-team effort.”

Playing as a team was exactly what it took for Prendie to come out on top in this crucial game.

Prendie remained undefeated in Catholic League play with a perfect 11-0 record, improving to 14-6 overall. Although this was a disappointing way for the Patriots to end their season, Carroll head coach Christina Elisio could not be more proud of her players for all that they achieved this year.

“They are a special group of girls,” Elisio said. “They play as a unit. We progressed through the season. Tonight was unfortunate. Prendie is a great team.”

For her shining moment in overtime, Brosious was recognized as the MVP. She credits her teammates for helping her to make that happen.

“We all worked together to get there,” she said. “We all finished.”

In addition to Brosious and Martin, midfielder Katie Caruso scored for the Pandas with back Reagan Dolan assisting.

“They knew what each other was capable of,” said coach Dolan.

Leading the Prendie defense was goalkeeper Chelsea Rafferty. “We knew we could get the ball out of the circle,” she said. “It’s the whole team. We know how to work together and be a good team.”

Forwards Maeve Riehman and Katie LaBella scored for Carroll, with midfielder Madison Nord providing an assist. Goalkeeper MaryKate Kearney and defenders Hannah Bateman and Carly Bateman prevailed on defense to keep the game close right down to the wire.

“She did amazing,” Elisio said of Kearney. “Defense is phenomenal.”

Following this big win, Prendie shut out Franklin Towne Charter, 9-0, in a District 12 Class AA title game Saturday to earn its trip to the PIAA Class AA playoffs for the second straight year.

NEXT: Turning out the football lights this fall? Not so fast