Drawing our attention to the promise of now and forever 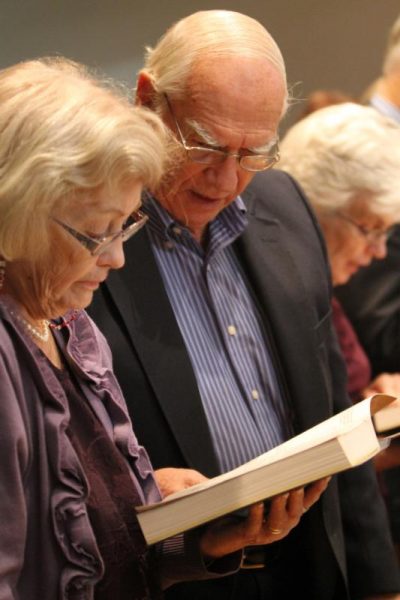 Cathy and Richard Freiburger read the profession of faith during Mass at St. John Nepomucene Church in Bohemia, N.Y., on a Sunday during Advent. We need the season of Advent as a time to meditate on the promise, even if it means finding a way to listen over the din of other voices. (CNS photo/Gregory A. Shemitz, Long Island Catholic)

The most significant promises that I witness take place at marriage ceremonies. As the officiating minister I ask both the man and the woman if they will repeat after me. Then they say how they promise to be faithful in good times and in bad, in sickness and in health, to love and honor all the days of their lives.

I hear these statements of promise and ask God to help them fulfill them, knowing how hard it sometimes can be.

With the image of the promise between the husband and wife in mind, we can easily focus on a still more significant promise. That is the promise of God to remain faithful to his people. It is a promise that is celebrated during Advent and reflected in the Scripture readings.

Sadly, Advent is always a short period of time between the holiday of Thanksgiving and the Christmas event. It is a period of promise and preparation that is easily overlooked. This year the season is even shorter with only three weeks and a day. That last day, which is both the fourth Sunday of Advent and Christmas Eve, will be lost to many.

Nonetheless, we need this season as a time to meditate on the promise, even if it means finding a way to listen over the din of other voices.

The other day a group, gathered for a banquet, was getting louder and louder. The host tried to get everyone’s attention, but no one could hear him. Then someone took a spoon and tapped the side of a wine glass, producing a high pitched ringing sound. The room quieted down.

Like the tap of that glass, Advent comes to us with a cry of the prophets over the noise of people with their own agendas and concerns. Isaiah reminds the people of Israel that their time of service is at an end and their guilt expiated. This is followed by the promise that the glory of the Lord is to be revealed.

That promise was made millennia ago. It was fulfilled and continues to be fulfilled. It is the ultimate promise that should be the center of our attention.

Perhaps the world needs modern-day prophets like Isaiah who continue to declare hope during bleak times and can remind people that God has not forgotten them. God’s promise lives on.

For many, Pope Francis has become that sign of hope. As a prophet he stands up to people of power and offers humble service. Instead of searching for fame or acclaim, he reaches out to the poor and cries out for compassion for all people. His voice is like the tap of the wine glass that gets people’s attention.

If we look, there are other prophets among us. Earlier this fall an Oklahoma priest was beatified as the first American-born martyr.

Blessed Stanley Francis Rother was living and working with the Tz’utujil people, a group of Mayan indigenous people of Guatemala, when he was killed in the middle of the night by those who opposed his preaching justice for the poor. This took place in 1981, during the 36-year Guatemalan civil war.

Each year when I take a group from my parish to Guatemala on mission, I make a point of visiting the site of Father Rother’s death. It is a room in the old rectory that has been converted to a humble and unpretentious shrine. I always stop and kneel in prayer.

Moved by Father Rother’s willingness to stay with his people and lead them through turbulence, I always find myself praying for perseverance and courage in ministry. I also pray that I may have a prophetic voice when necessary.

There is one other aspect of Advent that we don’t want to forget. This holy season is also a time of preparation through repentance. Like those in the crowd who went out to John and were baptized in the Jordan River, we must admit our sinfulness.

Yet this repentance is not simply about all our failings or our lack of faith. Instead, it is a repentance that is discovered in the face of God’s promise to overcome sin and to renew humanity. It is repentance born out of hope.

Consequently, Advent becomes a time for promise, prophets and repentance. Through that combination the world is changed now and forever. The nature of any true promise is to withstand time. It is always made in the present with the future in mind.

PREVIOUS: Can remains of unbaptized son be buried with his parents?

NEXT: Hope in motion, preview of another rising: Poems for Advent