Hope in motion, preview of another rising: Poems for Advent 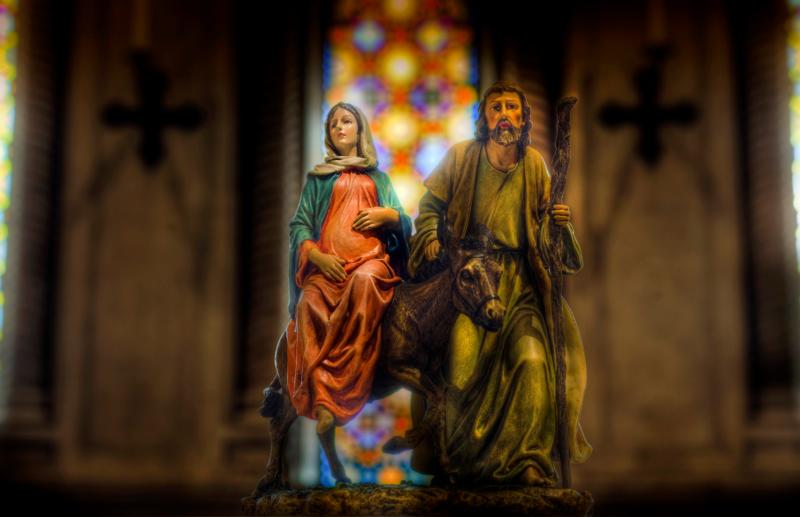 A sculpture showing an expectant Mary with Joseph traveling to Bethlehem is seen in a Missouri church during the season of Advent, the time of anticipation and hope before Christmas. Artists throughout the centuries have used their craft to shine a light on the prophecy of Christmas. (CNS photo/Lisa A. Johnston)

Humanity in such a tangled snare
… where did this all come from?
A warning rises
A prophet’s voice
“WATCH” into the darkness
A people called again to turn an eager, weary head
In a resistant time
To look through the darkness of a Judean night and
Trust that in the darkness of a Virgin’s womb
The Creator of Light begins to form.
As Advent begins, watch now and trust that
In your own unfamiliar darkness —
Inadequacy, job loss, depression or distance
There is a taste of the Bethlehem darkness,
Containing a flavor of the Promise
A Savior already forming from the Overshadowed One.
Patience, then.

The cruel axe once wielded cut short the tree of Jesse
The wound in the wood leaves an empty, shorn base
The human family suffers a crude cut — Sin — we are sapped of possibility.
God, leaving no such scar, reaches down
moving freely
to such an impossible place: the womb of the Virgin becomes sheer fertility.
God has poured himself out … so probe then —
Has the axe, with cruel decisiveness, touched your life
leaving a hollowness you fear to enter?
Step with determination; feel along the empty dark
and you’ll come upon the One Poured Out
Who overflows the impossible place
and brush close to a stirring most rare:
Hope in motion.

A nightly mission, the operative at last dispatched from the
real to unreal world.
The Angel enters the corridors of sleep where the troubled Joseph swims;
Interrupting one wonder with Another
whispering the long-treasured saving Plan,
prophecy becomes reality as
A seer’s vision brims.
Joseph’s sleep continues in the wake of the Almighty
At the noiseless morning breaking (or is that sin’s back?)
the Angel close to now returned to his haven, glances round
And sees as Joseph stands and stretches
the preview of Another Rising much more final and profound.

The destination is enclosed by the timber of a stable
as the endurance of pregnancy gives way.
Newborn arms unfold to welcome a kingly quest:
wise men, shepherds, and angels close their trail today.
yet this child’s eyes start a search far more severe;
His Mission turns attention beyond the guests humbled, bowing near.
He grasps for a splinter of the manger’s
beam.
His mother quickly bends and supplies
substituting her finger to satisfy
a Savior’s scream.
One day his insistent reach, undeterred will find
the object of his grasp:
a beam far more sure than this stable
which he will muscle well and wield and be death’s slay
His thirst-filled cry complete at last.

Msgr. Bransfield is general secretary of the U.S. Conference of Catholic Bishops. These poems are in his book, “Meeting Jesus Christ, Meditations on the Word,” originally published by Pauline Books & Media, and used with permission.

PREVIOUS: Drawing our attention to the promise of now and forever

NEXT: Admitting our shortcomings can light the way to God’s comfort