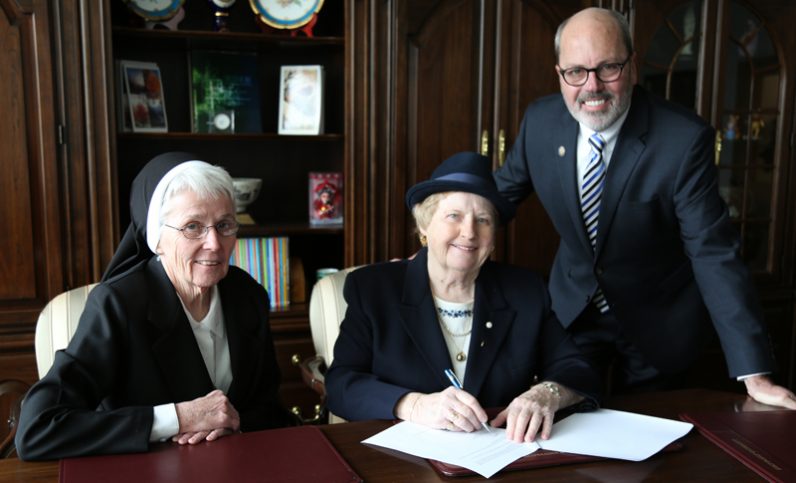 Marianne Harrington (center) signs over a property donation valued at $350,000 to Holy Family University, making it one of the university’s largest single gifts in its 63-year history. With her is university President Sister Maureen McGarrity, C.S.F.N. (left) and James Garvey, vice president of advancement.

Holy Family University has received a property gift with an estimated value of $350,000 from alumna Marianne Clisham Harrington to benefit the School of Education. It is among the largest individual gifts ever received by Holy Family in its 63-year history.

As a result, the Student Resource Center within the School of Education will be named in honor of Harrington’s parents, William Francis Clisham and Margaret Hall Clisham.

Harrington donated her Long Beach, N.Y., property to the Catholic university in Northeast Philadelphia as a tribute to her late husband Dec. 8, the anniversary of his burial and the date of a campus Mass celebrated in his memory.

“The foundation of our ministry at Holy Family is the university’s mission, which facilitates and supports the development of our students to their fullest potential,” said Holy Family University President Sister Maureen McGarrity, C.S.F.N. “Marianne’s consistent support of the university, culminating in her current gift, clearly embodies this mission and her wish to afford many generations of students the opportunity to benefit from the value of family.

“We are most grateful for her generosity, both now and in the past, and are committed to wisely steward the precious resources she has provided for the benefit of our students.”

Harrington is a long-time supporter of Holy Family students. She has previously established the Sue McLaughlin Parkes Memorial Scholarship, which was created in memory of her classmate. It is awarded to an outstanding student in the School of Education with demonstrated financial need.

After earning her Bachelor of Arts in English at Holy Family, Harrington taught at Camden Catholic High School in New Jersey. Upon relocating to New York, she attended New York University’s Steinhardt School of Education for a master’s degree in education and graduate studies in educational administration. She retired as a dean of students on Long Island, N.Y.

“Marianne is a remarkable alumna who cares deeply for Holy Family,” said James Garvey, vice president of University Advancement at Holy Family University. “Her affection and loyalty to her alma mater are obvious. We are most grateful that she has chosen to remember her late husband in a way that so tangibly supports our students.”

PREVIOUS: Among new clergy assignments, one priest heading to Rome

NEXT: On busy city street, this reminder of Jesus’ birth can’t be missed