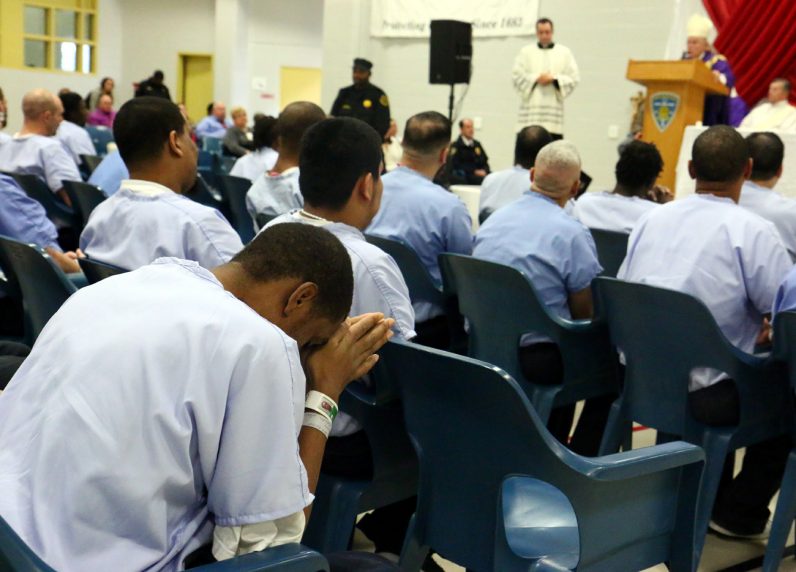 Archbishop Charles Chaput preaches the homily to inmates of Curran-Fromhold Correctional Facility in Northeast Philadelphia during his visit Dec. 18. Father Thomas Viviano, left, translates the message into Spanish for some inmates. (Photo by Sarah Webb)

Archbishop Charles Chaput visited the Curran-Fromhold Correctional Facility (CFCF), the largest unit of Philadelphia’s sprawling 6,600-inmate prison complex in Northeast Philadelphia, on Dec. 18 to celebrate a Christmas season Mass and assure the residents that they are not forgotten.

The fundamental message he offered in his homily for the group of prisoners, prison staff and volunteers attending the Mass in the CFCF gymnasium was one of hope.

(See a photo gallery of the Mass at Curran-Fromhold here.)

While not all of the prisoners attending the Mass were Catholic, they very clearly appreciated the archbishop’s visit and message.

Commenting afterward, Dante, one of the inmates, said, “It was a blessing to have someone speak to us and bring the word of Jesus Christ at this time of year.”

Another inmate, Ramon, said, “It was uplifting to have someone come during the holidays and share fellowship with us and bring us Christ Jesus.”

This was not Archbishop Chaput’s first visit to the facility by any means.

“I think it’s great, he comes every year,” said Shawn Hawes, the communications director for the Philadelphia Prisons. “He spreads a little faith and a little love with a warm and friendly spirit.”

The archbishop’s homily was translated into Spanish for those members of the congregation who did not speak English by Father Thomas Viviano, Archbishop Chaput’s secretary. Capuchin Franciscan Father Matthew Palkowski, the Catholic chaplain for the prisons, concelebrated the Mass with the archbishop.

“It’s a wonderful thing that the archbishop has come here regularly to celebrate Mass for the prisoners,” Father Palkowski said. “He really shows a real care for them.”

PREVIOUS: At home for disabled youths, $10K helps them feel ‘like any other kid’