At Operating Base Cecilia, it’s all hands on deck to help veterans 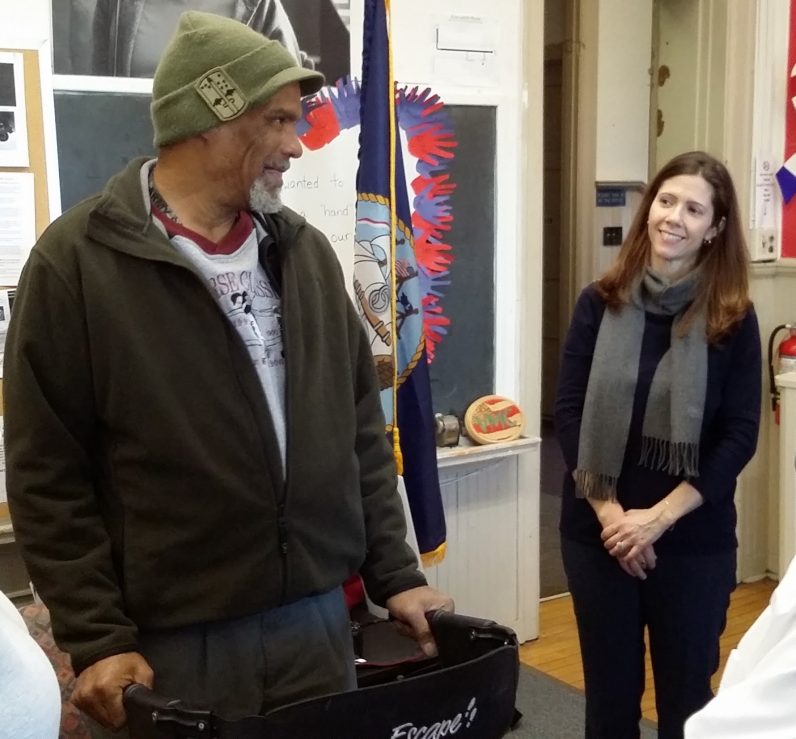 For many veterans, coming “home for the holidays” is simply a line from a popular Christmas song.

That’s because on any given night, an estimated 39,000 veterans are homeless, according to the U.S. Department of Housing and Urban Development.

Since October 2013, Catholic Social Services of the Archdiocese of Philadelphia (CSS) has sought to eliminate homelessness among veterans through a partnership with the Veterans Multi-Service Center (VMC).

Working out of the former St. Cecilia School in Coatesville, CSS and the VMC offer a range of supportive services including homeless outreach, food and clothing assistance, Veterans Administration benefits counseling, and life skills courses.

Nicknamed “Operating Base Cecilia,” the non-residential center assisted over 200 homeless veterans in Chester, Delaware, Bucks and Montgomery Counties during the past year.

On Dec. 13 the team at Operating Base Cecilia received a Christmas present in the form of a $3,000 donation from DNB First Bank in Downingtown. The bank pledged $100 to the center for every mortgage application it processed throughout the month of November.

Vince Liuzzi, DNB First’s executive vice president and chief banking officer, said that honoring veterans is a priority for him.

“They make a very important decision in their lives to support the country, their families and the communities that they serve,” he said. “And I think that coming back from service, and back into the community that helped them make that choice, is sometimes challenging.”

Liuzzi, who is also a member of the CSS board of directors, hopes to reduce veteran homelessness through his bank’s mortgage initiatives. 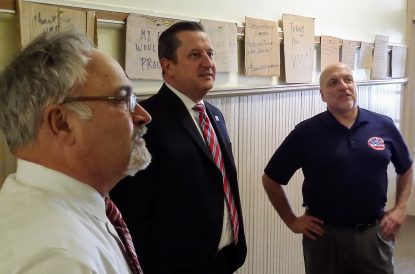 Reviewing the handwritten placards by veterans helped by Operating Base Cecilia, a partnership between Veterans Multi-Service Center and Catholic Social Services, on Dec. 13 are, from left James Amato, secretary of Catholic Human Services for the Archdiocese of Philadelphia; Vince Liuzzi, executive vice president of DNB First Bank in Downingtown; and Geoffrey Hurnyak, program manager at OBC in Coatesville. (Gina Christian)

“With veteran loan programs, we try to create opportunities for people of service, who have given of themselves so selflessly, an opportunity to enjoy the dream of home ownership,” he said.

Geoffrey Hurnyak, the VMC program manager and a veteran himself, notes that military experience — which instills self-sufficiency and self-sacrifice — can make it difficult for veterans to seek assistance.

“There’s a lot of pride there,” he said. “And to ask somebody for help is something that we have a hard time doing.”

Hurnyak, who completed three tours of duty in Iraq, directs his team to reach out to veterans living in makeshift encampments.

“We pass out our information at those locations, and if there’s a campsite but nobody’s there, we’ll leave our business cards,” he said. “In Bucks County, for example, people have called us from our leaving business cards at these camps.”

The main hallway of Operating Base Cecilia displays messages of thanks from veterans who have benefited from the center’s services.

(Watch a video on Operating Base Cecilia:)

The cardboard signs, which recall those used by homeless veterans to solicit aid, are part of the VMC’s “Rewrite the Cardboard” campaign, an effort launched in 2014 to raise awareness of veteran homelessness.

Hurnyak credits Catholic Social Services with enhancing the effectiveness of the VMC’s mission.

“The relationship has been nothing short of outstanding,” he said. “The friendships, the work that we do together in achieving the goal of getting the veterans into stable housing has been great.”

The VMC subcontracts activities such as case management to Catholic Social Services staff, who work under the direction of Rick Pytlewski, CSS administrator for Chester and Delaware counties.

Karieff Smith, an outreach specialist at Operating Base Cecilia, feels that the VMC and CSS personnel blend seamlessly.

Listen to CatholicPhilly.com’s interview with staff and clients at Operating Base Cecilia:

“It’s like a family here,” Smith said. “Sometimes we have to ask each other, ‘Are you VMC or are you Catholic Social Services?’ We never really know; we’re just one team here to service our veterans.”

“Any time that you can help people in need, and you can work together, you can always achieve more than by working alone,” said Martin, who created the bank’s veteran donation campaign.

Vernon Fountain, an army veteran who served throughout the U.S., Europe and Korea, appreciates the combined effort of the VMC and CSS teams at Operating Base Cecilia.

“They’ve helped me with food, with a place to stay, with transportation, with my budget,” he said. “If this place weren’t here, I wouldn’t have any help at all. So I’m very grateful.”

Handwritten notes of thanks from veterans assisted by Operating Base Cecilia, a Coatesville-based partnership between Veterans Multi-Service Center and Catholic Social Services. (Gina Christian)

Veterans’ center gets a make-over and a blessing in Coatesville

PREVIOUS: 62nd annual Christmas party for kids might be biggest, best yet

NEXT: 28 local Catholics to receive honors from Pope Francis