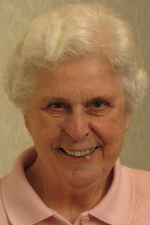 Sister Elizabeth Gehrman, S.H.C.J. (formerly Mother Mary Gemma), who was a Sister of the Holy Child Jesus for 68 years, died Dec. 2. She was 90.

Born and raised in Philadelphia, Sister Elizabeth was the daughter of the late August and Johanna (Buehelle) and sister to Frederick Gehrman and Henrietta Leonard.

Sister Elizabeth first met the Holy Child Sisters while attending West Catholic Girls High School in Philadelphia, and she joined the congregation in 1946. She made her final vows in 1954 and became well known by the religious name Mother Mary Gemma.

Sister Elizabeth’s educational ministry spanned more than five decades. From 1949 through the early 1970s she taught in Massachusetts, Philadelphia, Oregon and California. In 1974 she returned to the East Coast where she taught at Holy Spirit School in Sharon Hill and Annunciation School in Washington, D.C., until 2002.

At several places where Sister Elizabeth had taught, she also served as principal, including Holy Spirit and Annunciation.

In 2002 Sister Elizabeth retired from teaching and began living in community at St. Eugene Parish in Primos, where she took care of day-to-day responsibilities of the sisters’ community and became active in parish ministry. She also worked part time in the Province Health Office in Drexel Hill.

Sister Elizabeth was involved with the Holy Child Sisters’ EcoSpirituality Group and even named the local offshoot, The Evergreens. She brought her increasing knowledge and practicality to these meetings.

After moving to a Holy Child community in Bryn Mawr, she volunteered in the congregation’s archives where the American Province archivist Sister Roseanne McDougall, S.H.C.J., said Sister Elizabeth was always willing to serve in any way and, by suggesting the mid-morning coffee break, created a welcome sense of community.

NEXT: Oregon native Sister Lucy, S.H.C.J., dies at 80 in Rosemont