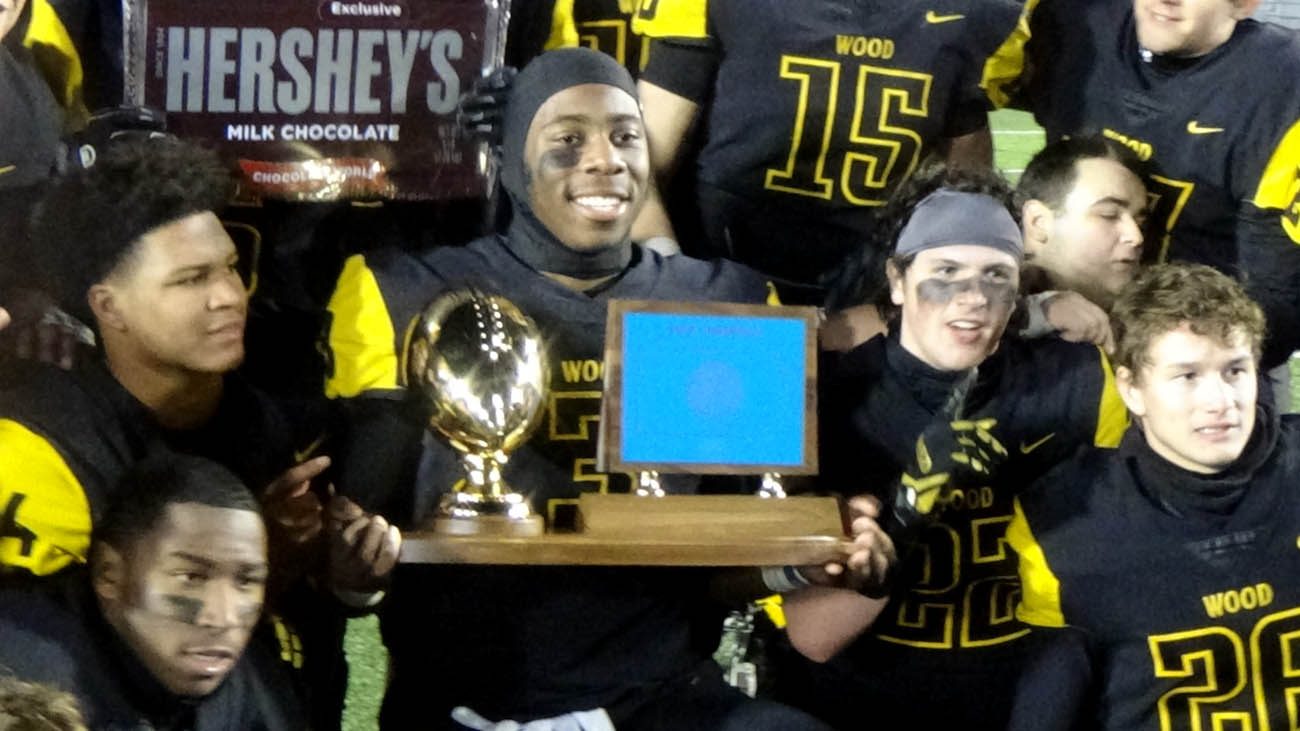 HERSHEY, PA – Now that was a whooping. Or, better put, a Wood whooping.

While extending their winning streak to 10, the Vikings (12-2) won their second straight state crown, fourth in five seasons, and fifth in seven.

“It’s amazing,” said first-team All-Catholic center Tommy Walsh. “This was our goal from the beginning of the year to the end of the year – to win a state championship. We did it. We accomplished our goal. I’ll remember this forever.”

As they have often during a 10-game torrid stretch during which their average victory was 43-11, the Vikings (12-2) started fast and furious. 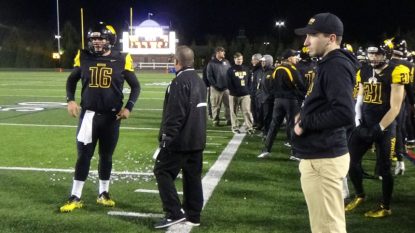 The Archbishop Wood coaching staff keeps their players focused even after building up a big first-half lead in the Class 5A state title game Dec. 8.

“It was an amazing game,” said Lambert. “My team and I set a goal when we started workouts in January to win a state championship. We’ve been working very hard ever since to get to our goal, and once it was in our grasps, we kept our foot on the gas and we went out there and played ‘Wood Football.’”

Already staggering, Gateway (14-2) desperately tried to convert a fourth-and-short from midfield, but senior Bill Shaeffer’s sack set up the Vikings in great shape and precipitated a one-yard plunge by Peoples to make it 21-0 with 4:22 remaining in the first quarter.

Asked later if having such a huge lead made it difficult to keep his players focused, coach Steve Devlin said the score never matters.

“We play every play like it’s 0-0,” said Devlin. “It doesn’t matter what point of the game it is. Every play is separate, and that is how we always approach it.”

Eventually supplanting his career high in rushes (25) and yards (267), Peoples scored again (14-yard run) on the second play of the second quarter and ultimately finished with four touchdowns to give him 30 for the season.

“Everything was clicking today, not just for me but for everyone,” said Peoples, who next year will play defensive back at Virginia Tech University. “We were determined right from the start.”

Junior quarterback Jack Colyar, who completed each of his three passes, tossed a perfect six-yard strike to senior Kyle Pitts with 5:19 remaining in the first half.

“I’m so proud of all our guys,” said Colyar. “This is what our goal was and we’re finally here and we accomplished it. Our motto is just to stay hungry. Our offensive line is the best line I’ve ever seen. The way they’re coached, the way they practice, and the way they work is phenomenal.”

Devlin enjoyed an opportunity to allow more players a chance to shine.

“These kids sacrifice a lot,” said Devlin, still wet from an, um, unsolicited ice water bath inside the final minute. “You get the second group in and the seniors in and all the young kids … try to get them a couple of clips on a state championship field on state championship night. They can say for the rest of their life that they played in the state championship.”

PREVIOUS: Prep had grown accustomed to state football titles, but not this year

NEXT: Many shooters have the hot hand in Catholic League gyms