What we owe America’s farmworkers 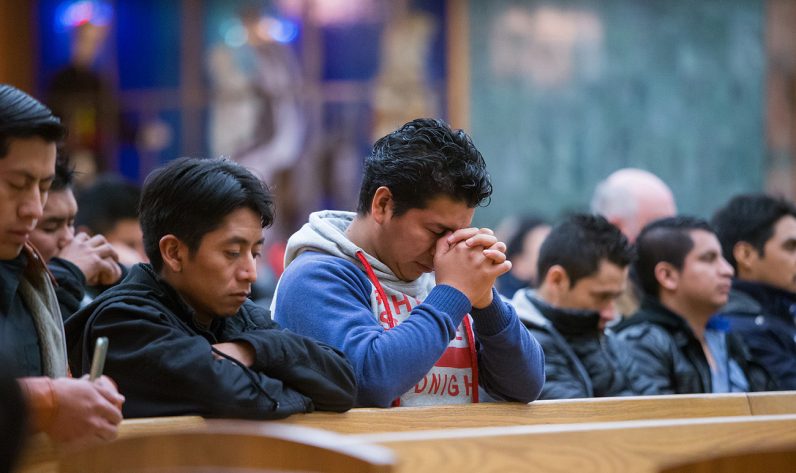 Men pray during a Dec. 17, 2016 Mass for migrant workers at Our Lady of Sorrows Church in Vancouver, British Columbia. (CNS photo/Ben Nelms)

The following unsigned editorial is from the Dec. 25 issue of America magazine, a national Catholic weekly magazine published by the Jesuits.

U.S. agriculture is facing a silent crisis. The Trump administration’s crackdown on undocumented immigrants has sown fear among farmworker communities, making workers harder to find than ever. Farm owners across the country are anxious about meeting their labor needs. Millions of dollars’ worth of crops are at the risk of rotting.

The present labor shortage reveals U.S. society’s dependence on farmworkers. The hands that pick what Americans eat are hands the country relies on. And with almost no native-born Americans willing to do the job, Latino immigrants have become indispensable. Even in the midst of the severe fires in California, farmworkers could not stop working lest harvests be lost.

Yet the nation’s collective reliance on farmworkers is not reflected in the way they are treated. In California, which produces two-thirds of the nation’s fruits, rates of food insecurity for farmworkers and their families range from 40 percent to 70 percent. Farmworkers’ low wages directly contribute to growers’ profit, but farmworkers regularly cannot afford to buy the food they pick.

Working conditions for farmworkers can be harsh. Even under the best conditions, a day of work is one of hard manual labor, with long hours and often high temperatures. The Trump administration’s Environmental Protection Agency has approved the use of a pesticide known to be harmful to human beings. Farmworkers have already gotten sick on the job as a result.

Society’s failures toward farmworkers extend beyond poor working conditions. The children of migrant farmworkers endure seasonal displacement that can make staying in school difficult. Social mobility is weak for those born into farmworker communities, creating a generational cycle of poverty. State and local governments resist attempts by farmworkers to organize for greater protections. And despite being dependent on farmworker labor, many local communities are openly hostile to migrant workers.

It does not have to be this way. In 2016, California recognized the right of farmworkers to equal overtime pay. In Florida, the Coalition of Immokalee Workers secured commitments from fast-food chains to buy only from agricultural sources that meet improved standards on pay and work conditions. That model of direct pressure on major companies is spreading. In Vermont, immigrant dairy workers just claimed victory in an agreement with the ice cream maker Ben and Jerry’s. 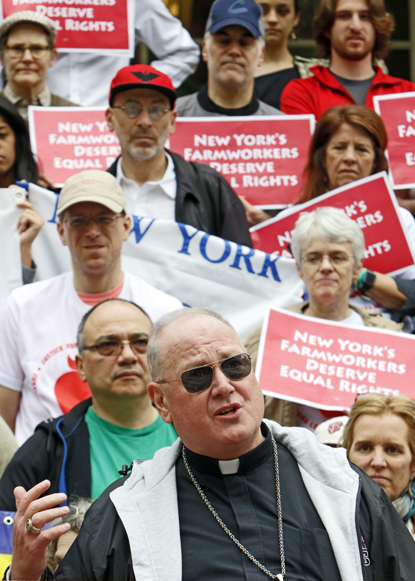 New York Cardinal Timothy M. Dolan speaks at a rally May 21, 2016 at New York City Hall during the March for Farmworker Justice. The 200-mile march, which began May 15 in Long Island, N.Y, and concluded June 1 at the New York state capitol in Albany, aimed to draw support for legislative action guaranteeing basic labor rights for state farmworkers. (CNS photo/Gregory A. Shemitz)

It is curious that so many Americans care about eating ethically (vegan, vegetarian, organic or free range) but do not think as much about the poverty and exploitation among the largely Latino farmworkers who are making their meals possible. Labeling programs, including the Equitable Food Initiative label, the Food Justice Certified label and the United Farm Workers Union label, support the fair treatment of farmworkers, but there is little indication that products carrying those labels are sought out by consumers.

The United States must do more to treat farmworkers with justice. A huge step would be to lift the threat of deportation that looms over many farmworkers by passing comprehensive immigration reform that recognizes both the need for labor in the United States and those laborers’ right to dignity and opportunity. Rectifying the injustice of the 1930s — when farmworkers were excluded from new federal labor standards — and finally offering farmworkers the same labor protections as other workers is also necessary.

Farm work, like all work, carries an inherent dignity and should be a viable path for immigrant families into the American middle class.

The common thread in all the challenges farmworkers face is a lack of urgency. Perhaps every time Americans say grace before a meal, they could spare a moment to remember those who make that meal possible.

PREVIOUS: No selfies at the first Christmas, but a lesson for the new year

NEXT: Where gladness and hunger meet is where God is calling you