Pilgrims stream to Ardsley, and the Child’s image heals a parish 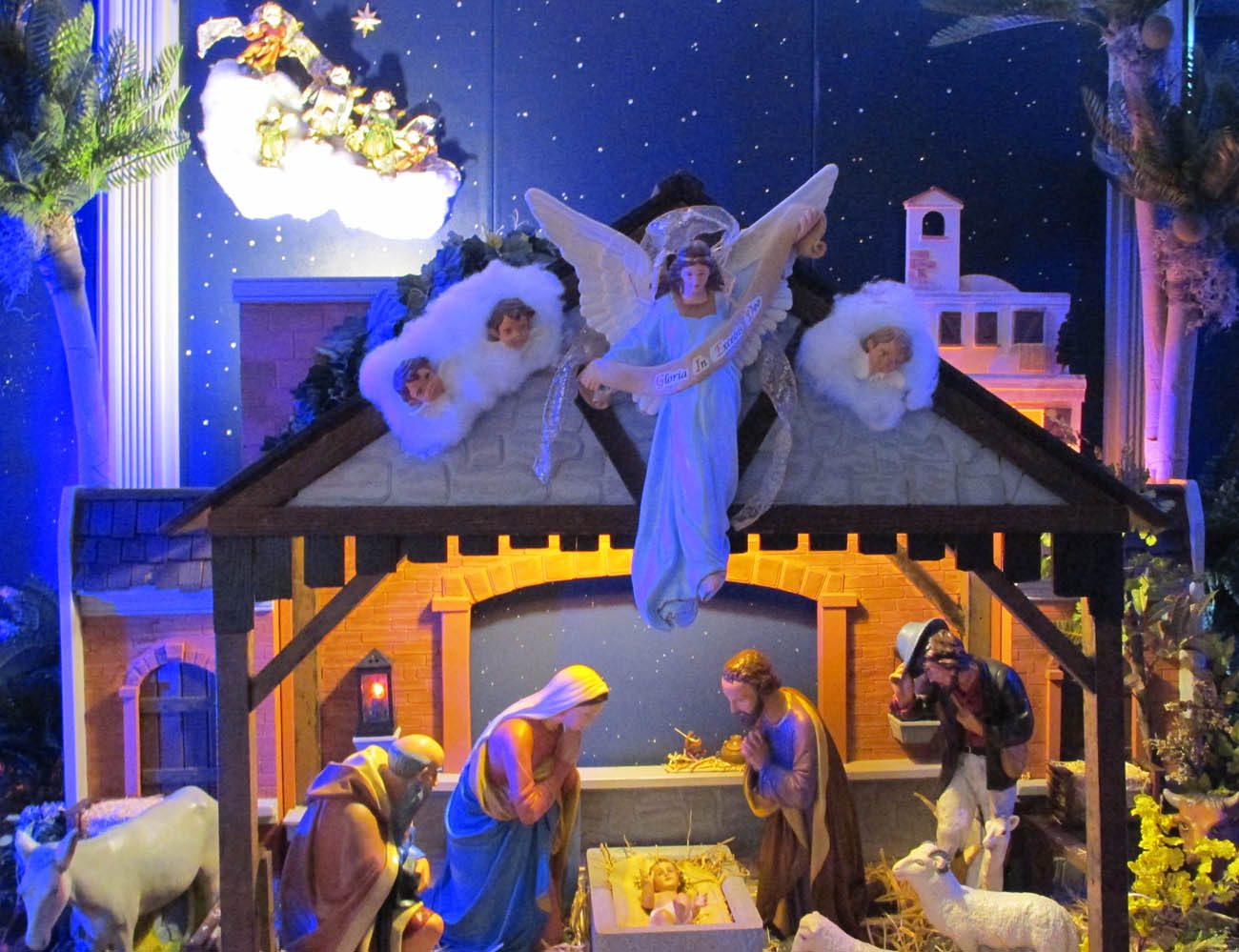 One view of the Nativity scene of Queen of Peace Parish in Ardsley shows the painstakingly restored figurines that had been displayed each Christmas at St. John of the Cross Parish before it merged with Queen of Peace in 2014. The Nativity draws numerous visitors to the parish, helping smooth the transition for parishioners and leading hearts to Jesus.

During the Christmas season, including the one just past, Queen of Peace Church in Ardsley receives an unusual number of daily visitors.

The draw was the Christmas crèche, or more accurately tableau, easily one of the most magnificent in the archdiocese.

(See a photo gallery of the Nativity scene here.)

“Magnificent is an understatement,” said Father Lawrence Crehan, the pastor of Queen of Peace. “It has brought people into the church in a way they would perhaps not have come. They come to see the crèche and perhaps stay for Mass of the Divine Mercy Chaplet or adoration.”

What is especially interesting is the crèche is a legacy from St. John of the Cross Parish, Roslyn, which merged into Queen of Peace in 2014.

“It has brought a rich tradition from St. John’s and we greatly love it,” the pastor said. “It has done exactly what it is designed to do. It has brought a sense of the presence of Christ. Everyone walks in just as if they were shepherds or magi. They come, they bow and they adore.”

If the Christmas tableau is impressive it really owes a great debt to former St. John’s parishioner Ron Dominguez, his brother Richard and friends Charles Bennett and Don Miller, with Ron playing the crucial role.

Father Crehan asked Ron to install the scene at a side chapel at Queen of Peace Church and since Christmas 2016, it has been a beloved staple of the parish.

It goes back to 2005 when Ron noticed the Nativity set’s impressive, two-foot-tall figures were badly in need of repair.

They are made of plaster, as was common with much of the church statuary made probably in the 1950s, and with annual packing and unpacking they became damaged, and the colors had faded over time. For example, St. Joseph had a broken neck and the Blessed Virgin had a huge gash.

“My hobby is model building, I’ve been doing it for 50 years,” Dominguez said. “We repaired the statues and repainted them with oil paints because that holds up better, it doesn’t lose its color.”

The renovation of the original pieces took about six years, but Dominguez and his team were not done.

“We built a new stable and over the years we kept adding to it,” he said. “For example, for the Three Kings we set up a tent.”

The shepherds’ field has a small campfire, as does the Magi grouping. The background town of Bethlehem is carved, not painted, and seven angels have been added to symbolize the heavenly choir.

Small touches in the Queen of Peace Nativity that you might not see in other scenes include a cat because there probably were cats in the area, and also a small owl with owlets nesting in the stable rafters.

Dominguez’s research shows that the ruins of a small Roman temple was fairly common in art of the Middle Ages, so it too has been included in this tableau. It may not be archeologically correct but symbolically it represents the death of paganism with the coming of the Redeemer.

Palm trees and tiny silk flowers similar to the flora of the Holy Land add another touch. The entire scene is lit with blue lighting to simulate the night sky.

As a former St. John of the Cross parishioner himself, Dominguez can attest that moving the tableau to Queen of Peace has gone a long way forward to help allay whatever hurt the St. John parishioners may have felt when their beloved parish closed.

“I saw four women cry when they came and another woman almost pass out,” he said.

It sounds all so very complete, but Dominguez and his helpers will keep adding touches. For them it’s a labor of love and a work in progress, but that also is true of one’s faith itself. 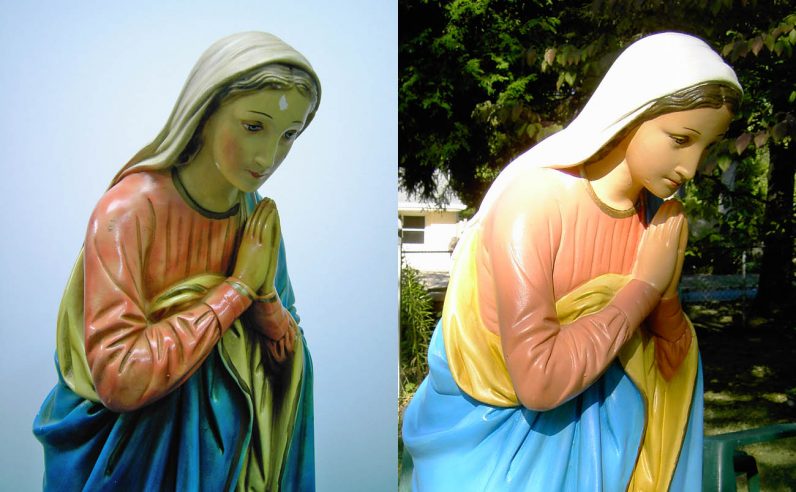 An image shows a figurine of the Blessed Virgin Mary before restoration (left) by Ron Dominguez, and after.

NEXT: Thousands of Philadelphia-area pro-lifers ready to march on Washington