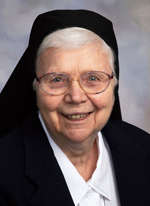 Sister Mary Richard Donahue, I.H.M., died Dec. 3 in Camilla Hall, Immaculata in the 65th year of her religious life. She was 91 years old.

Born in Havertown, Sister Mary Richard entered the Congregation of the Sisters, Servants of the Immaculate Heart of Mary in 1952 from St. Denis Parish, Havertown and professed her vows in 1955.

She taught and was principal and educational assistant for more than 15 years in elementary schools in the Archdiocese of Philadelphia and in the Diocese of Charleston. Sister Mary Richard’s last assignment was in the Apostolate of Prayer in Camilla Hall.

In addition to her congregation, Sister Mary Richard is survived by her sister Patricia Davis and many loving nieces, nephews, grandnieces and grand-nephews.