Appreciating the Mass, in any language

Jesus the shepherd leads us through our deserts to better place

A love that makes the miles melt

A misunderstood sacrament: Anointing of the sick 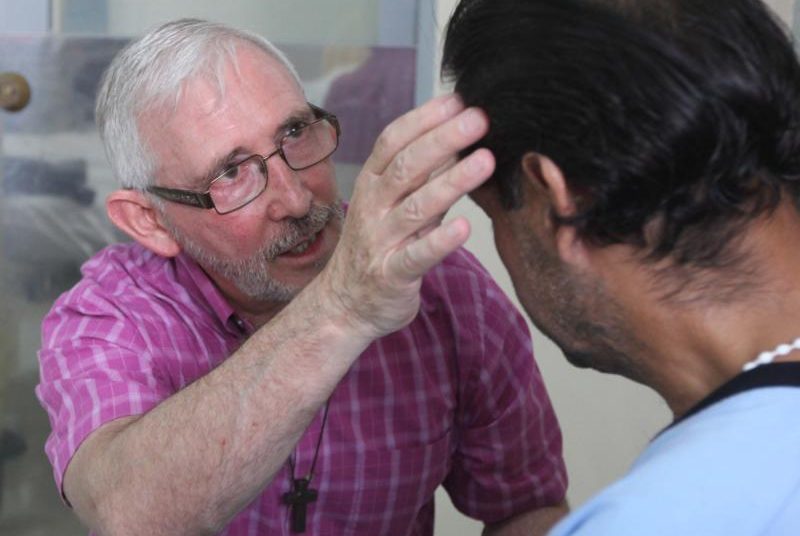 Maryknoll Father Joe Fedora administers the sacrament of anointing of the sick to a man with HIV who is about to be discharged from the Santa Rosa infectious diseases ward in Lima’s Dos de Mayo Hospital, in this Feb. 18, 2014 photo. The first purpose of the sacrament is a spiritual one — as well as forgiving sins, it offers the peace and the courage to deal with the difficulties that accompany illness — but it also asks for the restoration of health, if that be God’s will. (CNS/Barbara Fraser)

Among the seven sacraments of the church, I can say with some confidence (after 51 years as a priest) that the one most frequently misunderstood is the anointing of the sick.

Two weeks ago, I happened to be at a funeral home for a wake service when one of the funeral directors came out of an office and asked to speak with me. He had just been with the son of a man who had died the previous day, arranging the funeral service. He wondered if I would go into their morgue and give the “last rites” to the man, as a comfort to the son.

I explained that the sacraments were not administered to those who had already died, but that I would be glad to say a prayer of blessing.

He brought me into the morgue, where I did just that — made the sign of the cross on the deceased man’s forehead and asked the Lord to bring him gently into the peace of heaven and to give to his family both strength and consolation.

My guess was that the son may have thought earlier about calling a priest but had put it off so as not to “frighten” his ailing father. My guess, too, was that the son had grown up thinking of this particular sacrament as “the last rites” or “extreme unction” and had postponed it until it was too late.

In the updating of the church’s pastoral practice after the Second Vatican Council, the sacrament began to be called instead the anointing of the sick. Vatican II was clear that it was not to be reserved only for those at the point of death.

The church’s current Code of Canon Law provides that it is to be administered “to a member of the faithful who … begins to be in danger due to sickness or old age” (No. 1004). The ritual itself designates as proper recipients “a sick person … before surgery whenever a serious illness is the reason for the surgery,” as well as “elderly people … if they become notably weakened even though no serious illness is present.”

So the sacrament is appropriate for anyone whose health is seriously imperiled by sickness or advanced age. While it is never to be trivialized (hay fever, the flu or a torn rotator cuff would hardly justify it), neither should families wait until death is right on the doorstep.

The first purpose of the sacrament is a spiritual one — as well as forgiving sins, it offers the peace and the courage to deal with the difficulties that accompany illness — but it also asks for the restoration of health, if that be God’s will.

St. James, in fact, directed in his epistle: “Is anyone among you sick? He should summon the presbyters of the church, and they should pray over him and anoint (him) with oil in the name of the Lord, and the prayer of faith will save the sick person” (5:14-15).

Many times, I have found the sacrament to be of real comfort not only to the recipient but to the relatives as well. Often, I have gathered entire families at the home or around the hospital bed of a person with a serious illness; having said an Our Father and a Hail Mary together, I will anoint the person, using the striking prayers provided in the church’s pastoral ritual for the sick:

“Through this holy anointing, may the Lord in his love and mercy help you with the grace of the Holy Spirit. May the Lord who frees you from sin save you and raise you up.”

Sometimes, as I pronounce the final blessing, I invite the family to extend their own hand in blessing, all of them interceding together with the Lord for the one beloved.

Tears may flow freely — but so, I believe, does God’s grace.

Father Doyle is a priest of the Diocese of Albany. He is a columnist for Catholic News Service.

PREVIOUS: Coming soon to you: The sacrament of amazing grace

NEXT: Anointing of the sick: Christ and the church share in our suffering