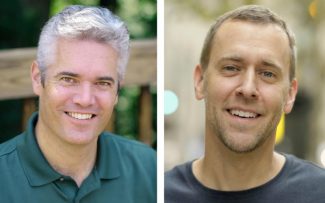 Bill Donaghy and Chris Stefanick are the co-authors of RISE. (CNS photo/Carmel Communications)

PHILADELPHIA (CNS) — The co-authors of a new program called RISE and their collaborators aim to do nothing less than “awaken today’s man.”

Calling it more a “movement” than a program, Chris Stefanick and Bill Donaghy said RISE is a 30-day challenge that encourages men to walk with a “brother” — a friend or relative — through a 30-day period to strengthen their bond, hold one another accountable and “live the fullness of their vocation every day — at home, at work and in their communities.”

The start date for the next 30-day challenge is Ash Wednesday, Feb. 14. Other official dates will be announced for spring, summer and fall. The cost is $32 per participant. Information on registering can be found at MenRiseUp.org. Men also can choose to start RISE at any time throughout the year.

Participants are equipped with several tools — a series of videos, daily challenges and other resources that walk them “through a battle plan for life,” said Stefanick, an author and speaker, who is the host of “Real Life Catholic” on the Eternal Word Television Network. He also is founder of the nonprofit organization Real Life Catholic.

“It’s simple, but the results are extraordinary,” he said in a statement. “Whether they’re faithful or just seeking, RISE will profoundly impact (men’s) lives for the better.”

RISE is organized as an individual journey for each man who participates up, but free leadership guides also are made available to parishes that might want to hold a weekly meeting for men in the parish enrolled in RISE.

“This isn’t just a program, it’s a movement,” said Donaghy, a popular speaker and a curriculum specialist at the Theology of the Body Institute, based near Philadelphia. He also is a husband and father — he and his wife, Rebecca, have four children.

“RISE meets men where they are, and gives them practical tools to live their faith out every day,” he added.

“RISE is all about stepping up and claiming your true identity as a son of God, embracing your natural and profound gifts as a man. That changes everything,” said Stefanick, who with wife Natalie has six children. “Imagine if a million men in the church were living intentionally as disciples of Christ. Families, parishes and communities would be transformed. That’s our goal.”

In a recent column, he said was “meant explicitly for the men of our local church,” Philadelphia Archbishop Charles J. Chaput mentioned RISE as one of a number of programs he said are needed to help men understand that the Gospel tasks them to be leaders.

“Men need a challenge. Men need to test and prove their worth,” he wrote in his Jan. 31 column on CatholicPhilly.com, the news website of the archdiocese. “Men feel most alive when they’re giving themselves to some purpose higher than their own comfort.”

“We men — all of us, both clergy and lay — bear a special responsibility because the Gospel tasks us as leaders,” he continued. “That takes nothing away from the genius and ability of women, or the equality of women and men. But human beings are not identical units. We’re not interchangeable pieces of social machinery.”

He pointed to what he described as a “decline of male maturity and responsibility” in U.S. society.

This decline “is one of the greatest problems American culture now faces,” he wrote. “Catholic men need to grow as men in the vocation God intends for them. In other words, the healing of the culture begins with the conversion of our own hearts and actions. RISE isn’t the only path to achieving that. But it’s an invaluable tool for the work.”

PREVIOUS: This Lent, learn ways to turn cold hearts to light of Christ