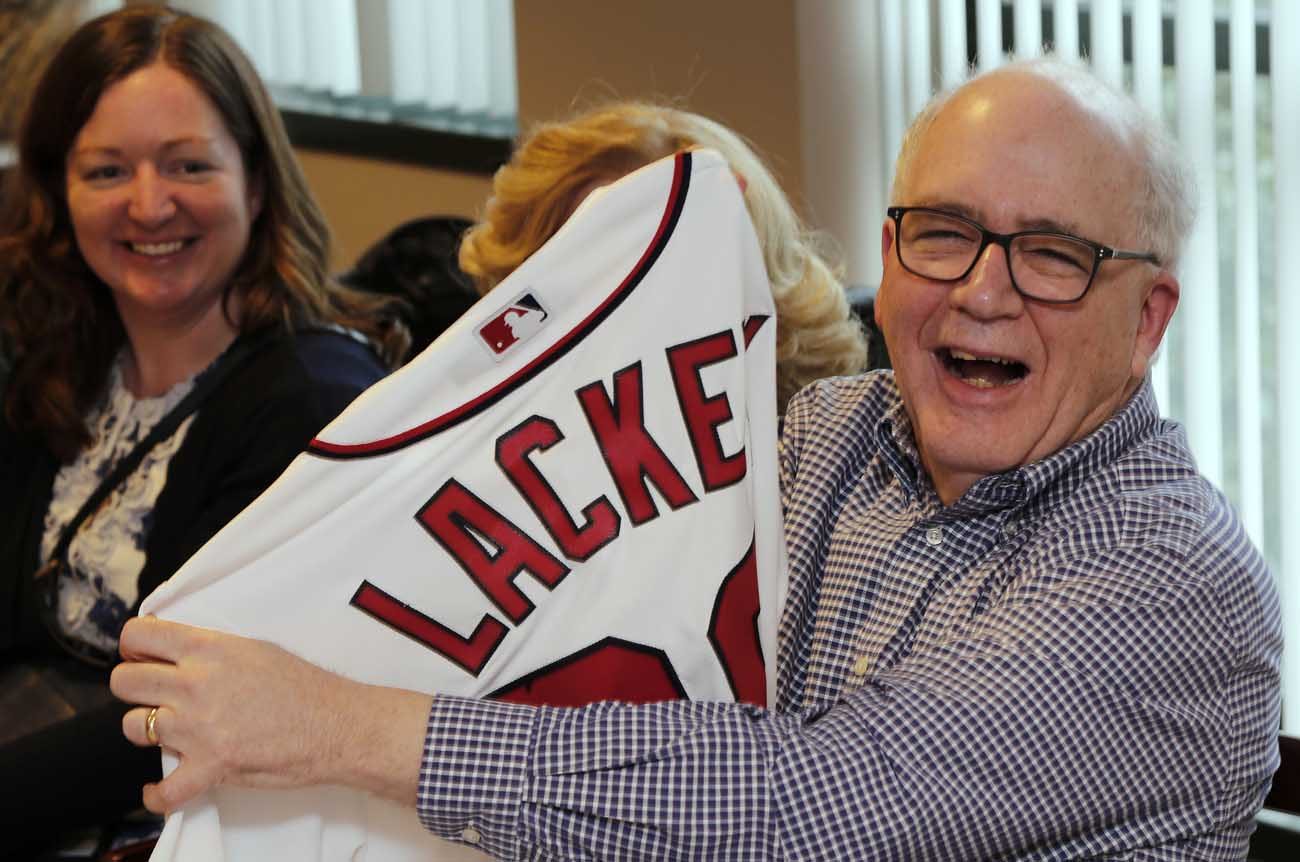 Jim Lackey, longtime editor at Catholic News Service, holds up a Washington Nationals baseball jersey during his retirement party Feb. 13 in Washington. Looking on at left is his daughter, Katharine. (CNS photo/Bob Roller)

As web editor and manager for CNS for the past decade, Lackey certainly got the importance of new media — and its broad outreach on platforms such as Facebook, Twitter, Instagram and YouTube — but he also saw, and still sees, the importance of old-fashioned print publications and doesn’t think they are going away anytime soon.

Sitting at his kitchen table in the Washington suburb of Falls Church Feb. 15 — just two days after his CNS retirement party — Lackey said he is a “firm believer” in every Catholic family receiving a diocesan or archdiocesan newspaper “even if it just sits on the coffee table.”

As he sees it, a paper just sitting there has the chance to be picked up and read.

He says this from experience, remembering The Catholic Telegraph, archdiocesan newspaper of Cincinnati, at his home with his parents and two siblings in Dayton, Ohio.

He admits he mostly read the movie reviews in his younger years and was often perplexed about ratings from then-NC News: “Adults With Reservations” wondering how adults could hold spots for movies.

Then years later, after graduating with a journalism degree from Marquette University in Milwaukee in 1974, he ended up working for a diocesan newspaper: The Catholic Messenger in Davenport, Iowa. Lackey’s official title was diocesan editor, but during his five years there, he did reporting, photography and layout, noting that one benefit of niche journalism is: “You get to do a little bit of everything.”

In Davenport, he also met his future wife, Linda, who was working for the daily newspaper.

Lackey sensed he might have a career in journalism after getting good grades for writing in elementary school and being the editor of his Catholic high school newspaper. He considered sports journalism and could probably have written about his beloved Washington Nationals baseball team, but he stuck with the Catholic press until his last day of work at the end of last December.

He started with CNS, then called NC News, in 1979, and a year later married Linda, currently a freelance writer and editor. Their daughter, Katharine, was born in 1986. For the past seven years, she has been an assistant editor of breaking news at USA Today.

At CNS, Lackey wore several hats. From 1979 to 1984, he was a federal reporter covering the White House, Capitol Hill and the Supreme Court. He saw two U.S. presidents up close in the Oval Office: Jimmy Carter and Ronald Reagan.

But politics aside, he said one of his favorite assignments was standing in Washington’s Lafayette Park in 1979, watching St. John Paul II come down Pennsylvania Avenue to the White House.

Five years after that first of several U.S. papal trips, Lackey was named national news editor and then in 1989 he became general news editor, supervising the daily news report and coordinating national and international coverage.

In 2014, he won the St. Francis de Sales Award, the highest honor given by the Catholic Press Association of the United States and Canada. He was honored for “the first-rate quality of his reporting and editing and the wide reach of work” in his more than 40 years in the Catholic press and “for his tireless dedication to make the Catholic press great.”

In 1982, just a few years into his CNS career, Lackey was diagnosed with PLS — primary lateral sclerosis — which is a type of motor neuron disease that causes muscle nerve cells to slowly break down and causes weakness in voluntary muscles that control one’s legs, arms and tongue.

It’s not something he talks about, but it is something he has lived with, and adapted to, for more than 30 years. The disease has slowed him down, requiring him to walk with a cane and then to use a motorized scooter. It also has made it nearly impossible for him to write by hand.

But his personal take on it is: “I don’t feel it’s changed me. It hasn’t changed who I am.”

And who he is, was a big topic at his retirement party.

Greg Erlandson, CNS director and editor-in-chief, said Lackey “kept CNS in the digital game” in recent years and said Lackey was the “model of a Catholic journalist: resilient, generous, dogged (and) faithful.”

Tom Lorsung, retired CNS director and editor-in-chief, described Lackey as “one of the best hires we ever made in the news service” and added that he was “admired and greatly accomplished, beloved yet humble.”

So for now, Lackey could rest on his laurels, but while he is still figuring out his retirement plans, he is focusing on a completely different style of old and new media. It includes trips to the library, plans to organize family photos and movies, and keeping up with personal social media accounts, all without deadlines or a long commute.

As he put it at his party: “It’s fun living in this area when you don’t have to commute and now I don’t have to.”

PREVIOUS: If Catholic Church owns up to its racism, it can change, says scholar

NEXT: Good relations with lawmakers key to ‘vocation’ as lobbyist