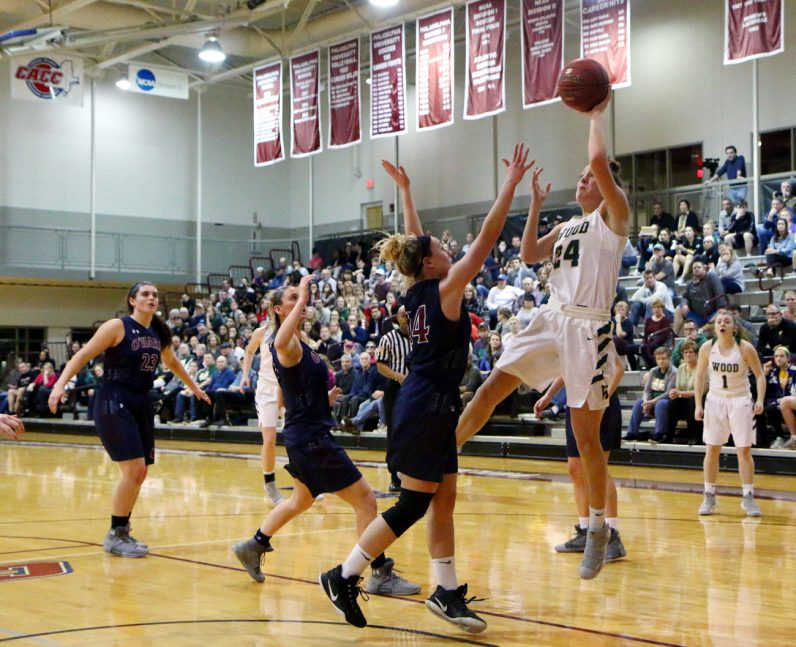 No pressure or anything.

The guard/small forward, however, managed to calmly sink both shots to give the Lions a five-point lead, one they would retain in a 39-35 victory. The win puts defending champion O’Hara in the Catholic League championship against Neumann-Goretti Feb. 26 at the Palestra.

“Yes, I was nervous, but I tried to block it out,” said Boylan. “I was thinking about our seniors and I didn’t want to let them down.”

At the 1:15 mark of the final stanza, Boylan had been fouled while shooting a three-pointer. She canned two of those freebies to put the Lions ahead by 27-18. From that point, outstanding contributions by senior All-Catholics Maura Hendrixson and Kenzie Gardler, along with tenacious team defense, helped offset a brilliant all-around, 18-point performance by Northeastern University-bound Archbishop Wood senior Katie May.

Of O’Hara’s 39 points, Hendrixson (Drexel University) scored 14 (eight points in the first quarter and six in the fourth) while Gardler (Villanova University) netted 13. 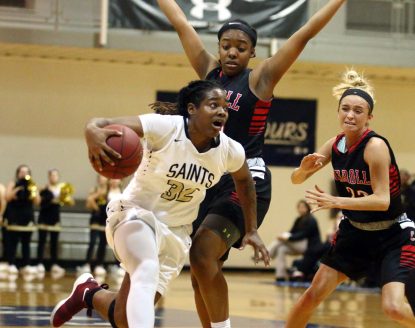 Neumann-Goretti battled Archbishop Carroll in the Catholic League semifinal Tuesday, Feb. 20 at Jefferson University and emerged with a last-second, 48-47 win over the Patriots. N-G meets
Cardinal O’Hara Feb. 26 at the Palestra for the championship.

Before Boylan’s clutch marksmanship, the two seniors had full confidence that she would knock them down.

“As a freshman I don’t know that I could have stepped up and done that,” said Gardler, who tallied seven of O’Hara’s nine points in the third quarter and added four in the pivotal fourth. “Siobhan really stepped up for us. I knew she was going to make those. She’s hardheaded. She loves winning. She’s very competitive. She loves us and we love her. She would do would do anything for us because it’s our last time playing.”

Hendrixson, who also contributed a game-high eight rebounds, two blocks, two steals and a highlight-reel, floor-length pass to a streaking Gardler for a basket in the final seconds of the third quarter, said she vividly recalls being a freshman and can identify with Boylan’s “senior-first” sentiment.

“I was in that spot where the older people trusted me, and that was the best feeling in the world,” said Hendrixson. “Her making those two free throws were huge both for her and for the whole team. I wasn’t surprised she made them. She can take any shot and make it.”

“She gives us a lot of energy,” said McGinty. “She is a good player and has a lot of potential. Her four free throws were really important. Hopefully that helps her for Monday.”

Boylan was asked to break down her mindset as she approached the line while hundreds of people cheered from the stands at such a pivotal juncture.

“I practice free throws all the time, so I just tried to think of it as practice,” she said. “I focused on making the first one. Once I did that and we went up by four, the second one was a lot easier.”

If she says so.

O’Hara’s next challenge is easily its mightiest — defeating Neumann-Goretti.

In the second game of the doubleheader, top-seeded and undefeated (in league play) Neumann-Goretti faced an Archbishop Carroll squad that on Jan. 20 had played arguably its worst game of the regular season, a 62-37 loss to the Saints.

On this night, led by dynamic senior Molly Masciantonio’s 15 points and four assists, the Patriots gave N-G everything it could handle. In the end, however, it was a three-point swish by Tatiana Jones with three seconds left in the game that catapulted the Saints to a thrilling 48-47 triumph.

Holding oversized balloons in school colors representing her 100th win as N-G’s coach, a thoroughly drained Andrea Peterson looked like she had just played the game herself.

“This is what we live for in basketball,” said Peterson, an Archbishop Carroll graduate. “It helps us playing really strong programs out of conference, because the Catholic League is so great. Just look at tonight and the huge crowd.”

The Saints were plagued with foul trouble throughout, and although Peterson was obviously — and, truth be told, for good reason — frustrated by the disparity in foul calls (at one point of the fourth quarter, N-G had been whistled for 10 infractions to Carroll’s three), she did not let that become a major issue, and her players followed suit.

“We are used to it,” said Peterson. “It is what it is. We have no control over it. We prepare every day to control what we can control. We don’t let anything take us out of our game. Whatever difficulties we face, it makes us stronger.”

Before Jones’ heroics, the junior forward had been untypically struggling throughout the game. Although 22 points from senior Jabria Ingram, the Catholic League’s Most Valuable Player and a Hartford University signee, were integral to the victory, they wouldn’t have mattered had Jones not stepped up and drained a three with the season on the line.

“I told her she has something big left in her,” said Peterson. “I told her that she would end up helping us win.”

Now comes a battle with defending champion O’Hara, which knocked the Saints out of the playoffs in last year’s semifinals.

“We have to prepare for them right away,” said Peterson. “I’ll tell you one thing. We have to defend for 32 minutes if we are going to be successful.” 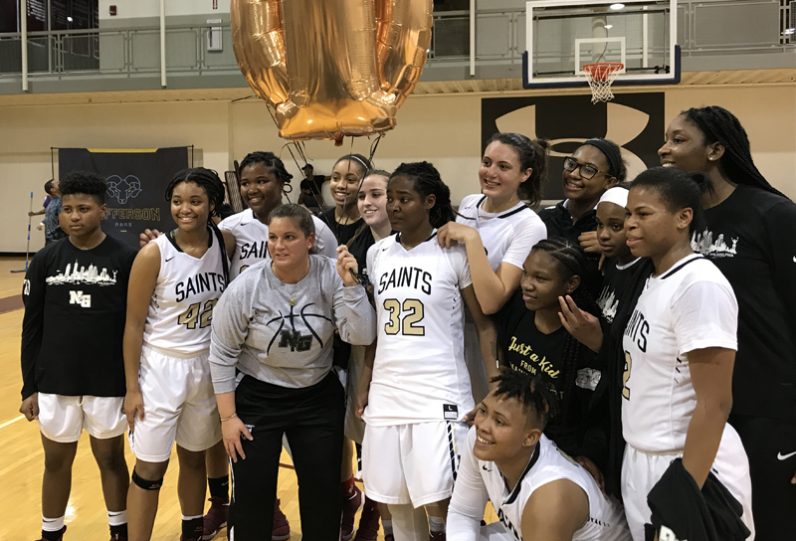 Neumann-Goretti girls basketball coach Andrea Peterson, center, celebrates with her team after their 48-47 win and Peterson’s 100th win at N-G Feb. 20 in the Catholic League semifinals. The Saints will meet Cardinal O’Hara Feb. 26 in the league championship. (John Knebels)

PREVIOUS: No drama as girls’ hoops squads move on to semifinal play

NEXT: Catholic League boys’ semifinals each come down to the wire