Catholic League boys’ semifinals each come down to the wire 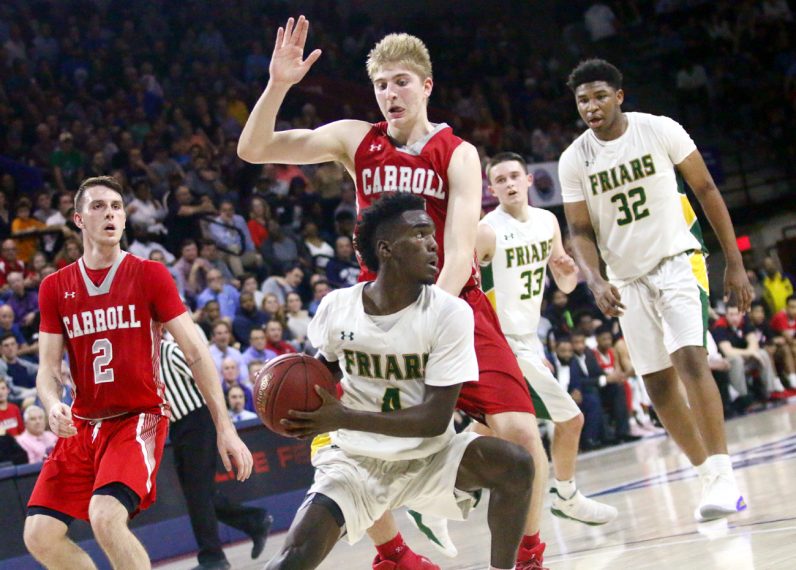 Bonner-Prendergast’s Donovan Rodriguez (no. 4) looks for a way through the Archbishop Carroll defense during the semifinal game Feb. 21. (Sarah Webb)

That was the margin for both Catholic League boys’ basketball semifinal contests Wednesday night, Feb. 21 at the Palestra.

The Catholic League championship is set for Monday night, Feb. 26 at the Palestra. After Neumann-Goretti and Cardinal O’Hara battle for the girls’ title, Bonner-Prendergast and Roman Catholic will do likewise for the boys’ honors.

“This is the way it has been all year,” said Bonner-Prendergast coach Jack Concannon. “These games going down to the end is nothing new. It’s what we expected.” 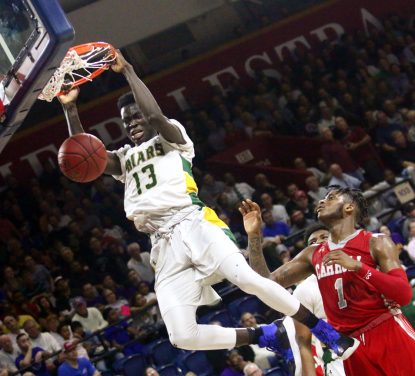 Bonner-Prendergast’s Ajiri Johnson dunks the ball with Carroll’s Keyon Butler on his heels.

During an interminable final half-minute, Bonner-Prendergast struggled at the foul line (2 for 5) and Carroll turned the ball over on four straight possessions.

“Defense was important,” said B-P junior Isaiah Wong, the Catholic League Most Valuable Player who tallied a season-low 10 points but contributed 10 rebounds and four assists. “Both teams had to fight for all their points.”

“It felt good to contribute,” said Rodriguez. “Everybody had to do their job and that’s why we won.”

In the fourth, seventh-seed St. Joseph’s Prep (17-8) fell behind by 56-41 with 3:45 remaining but stormed back behind senior Kyle Thompson (25 points), senior Darius Kinnel (19 points), and junior Trevor Walls (10 points) to close within 67-63 on a trey by Kinnel with 15 seconds left and 69-66 on three-pointer by Thompson. But without any timeouts, the Hawks were helpless to stop the clock as the remaining four seconds ticked away without Roman needing to inbound. 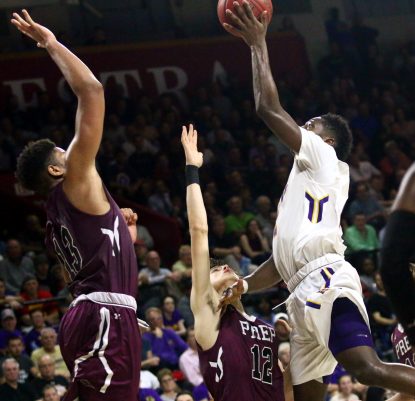 “It’s always bittersweet,” said Roman coach Matt Griffin, when asked how he felt about defeating his 2007 alma mater and former basketball coach, the legendary Speedy Morris. “I love Speedy. Ultimately, we are competing against each other now.”

This latest victorious script is nothing new for the Cahillites. They have been behind in numerous games, most recently by 15 points to La Salle in the quarterfinals. But Roman seems fearless.

“We believe that we are going to win,” said Allen Betrand, who scored 12 of his team-high 20 points in the fourth quarter and added eight rebounds and four blocks. “It’s about believing in yourself and your teammates. We practice situations where we are behind, so it’s nothing new to us.”

Griffin’s positive energy, said several players, is one of the major reasons why the Cahillites, who are aiming for their third championship in four years, maintain balance whether ahead or behind. Griffin is quick with a pat on the back and often offers words of encouragement regardless of the circumstances.

About 30 minutes after the game, Griffin was standing with several friends near the north basket and was periodically approached by different reporters who often repeated the same questions.

“I’m just extremely excited for our guys,” he said. “This is about our players having the opportunity to play in a championship, which we did not have last year. As a coach, I just want to create opportunities and memories for these guys that they might not otherwise have had. I’m very proud of them.” 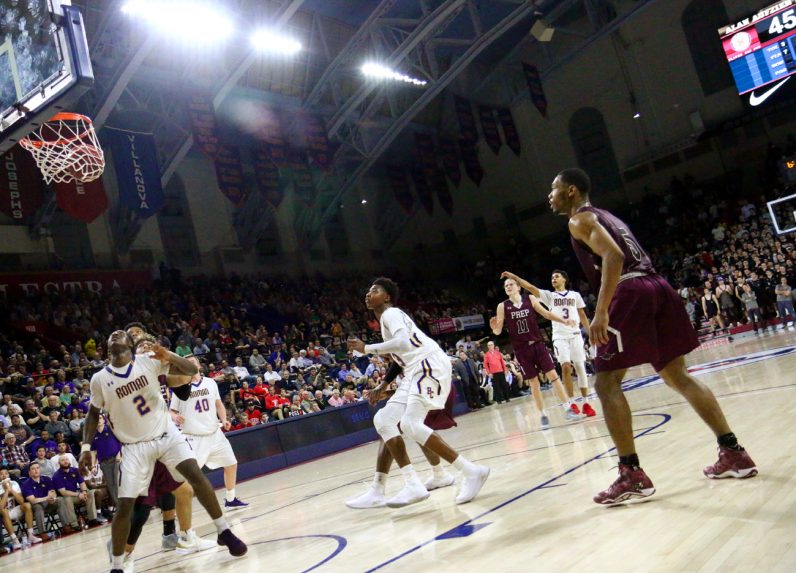 NEXT: Roman Catholic uses its own ‘Philly Special’ to grab PCL title