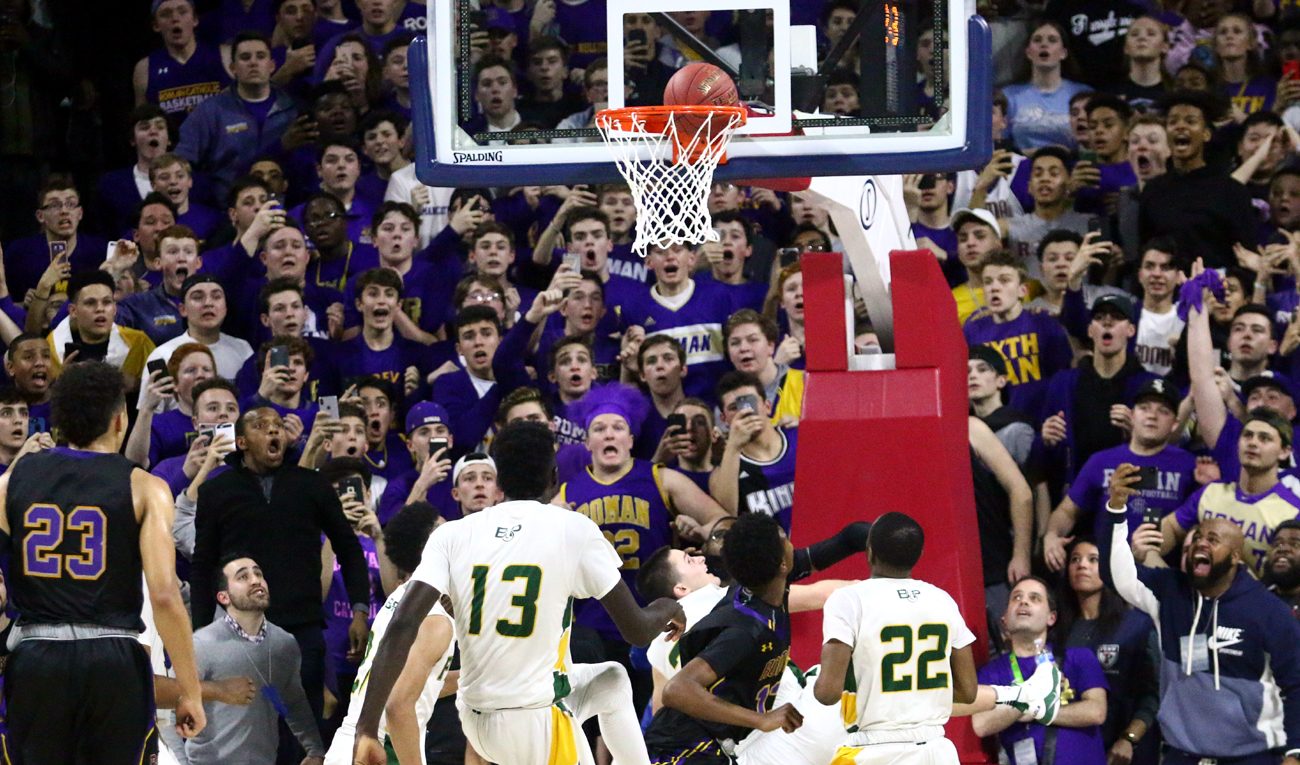 The tension on a hundred faces is released as the shot by Roman Catholic's Hakim Hart drops in for a two-point lead with little more than one second remaining in the Catholic League title game Feb. 26 at the Palestra. Roman prevailed over Bonner-Prendergast, 51-49. (Photo by Sarah Webb)

A few seconds after Roman Catholic sophomore Lynn Greer III and junior Hakim Hart teamed up for a legendary basket in Monday night’s Catholic League basketball championship at the sold-out Palestra, CatholicPhilly.com editor Matt Gambino borrowed a term from the local sports lexicon made famous after the Philadelphia Eagles won the Super Bowl three weeks ago.

When told of the description, Hart smiled and said, “Yes! I love that! Call me Carson Wentz!”

Minutes earlier, Hart’s basket with 1.6 seconds remaining in regulation catapulted Roman Catholic to a dramatic 51-49 triumph over Bonner-Prendergast. The Cahillites have now seized three of the past four CL titles and a league-record 31 altogether.

This one certainly placed itself in the annals of most exciting.

During a back-and-forth affair that featured eight deadlocks and nine lead changes, the third-seed Cahillites (19-5 overall, including a 68-66 overtime loss to B-P on Jan. 19) tied the game at 49-49 and had possession with about one minute left. Second-year coach Matt Griffin implored his troops to hold for the last shot.

With Greer doing most of the dribbling at the point while being hounded by B-P junior and league Most Valuable Player Isaiah Wong (18 points, nine rebounds, four blocks), Roman made its move as the mesmerized Palestra crowd emitted a nervous buzz.

Greer drove inside, had nowhere to shoot, and then found an open Hart darting under the basket. Despite contact by a B-P defender, the 6-foot, 5-inch swingman banked in a layup that sent Roman’s nearby fan-base in total hysteria.

(Watch a video of the decisive play below:)

After a timeout, the top-seed Friars (21-4) were unable to set up a final attempt, and a game that “featured” 28 combined turnovers — that’s more than one every two minutes — was over.

“I had to be ready to score,” said Hart. “I was waiting on the baseline. I knew (Greer) would find me. We always work together in crunch time.”

(Watch a video of the final play of the game and the start of the championship celebration below:)

Roman coach Matt Griffin said the Cahillites have practiced for these situations all season long.

“We just wanted to get the last shot,” said Griffin. “I’m very proud of the way we were composed. We took our time and we knew we either wanted to go into overtime or win the game. Lynn Greer made an unbelievable play, found Hakim … made the layup.” 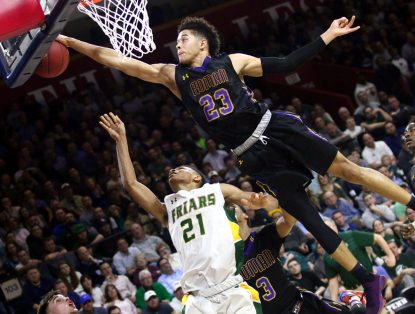 Roman’s Seth Lundy (right), who led his team in scoring with 15 points, blocks a shot by Bonner-Prendergast’s Isaiah Wong, the Catholic League MVP who led all scorers in the league championship game with 18 points along with nine rebounds and four blocks. (Sarah Webb)

Both teams played tenacious defense. That said, there were stretches of play by both squads that resembled a playground scrum. It led to 31 free throws — almost twice as many by Bonner (13 for 20) compared to Roman (9 for 11)

“It’s all about grinding,” said Griffin. “We didn’t want to win pretty. It’s about winning ugly and about scoring more points than Bonner. We knew it was going to be a one, two, or three-point game. We’re grateful to come out on top.

“Give Bonner and (coach) Jack Concannon all the credit in the world. They’re a fantastic team. They’re well coached and have terrific players. We just happened to get the bounces this time. I’m so proud. So proud. It’s an awesome feeling.”

Asked if he had ever before scored a game-winner, Hart said he had done so in middle school. He was asked if this one was a bit more important. 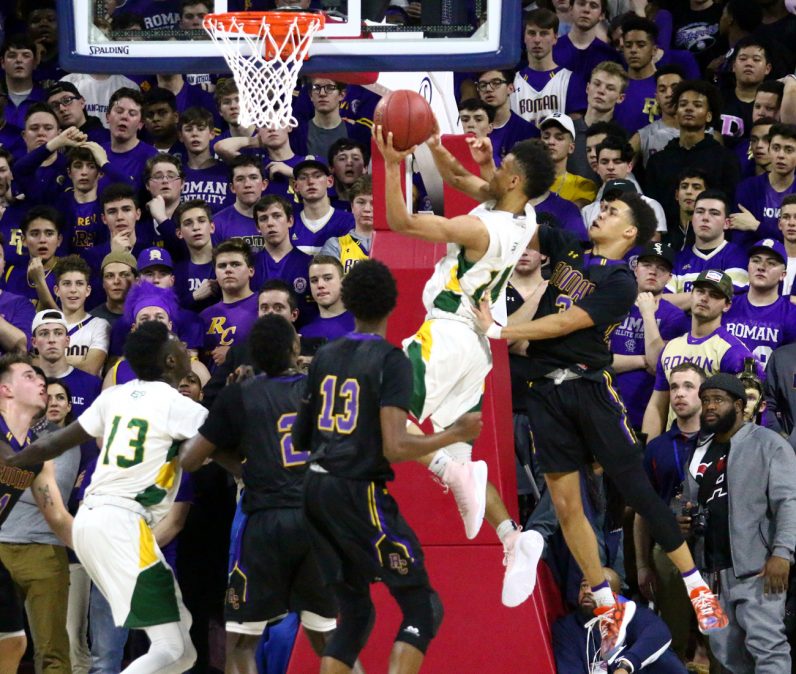 PREVIOUS: Catholic League boys’ semifinals each come down to the wire