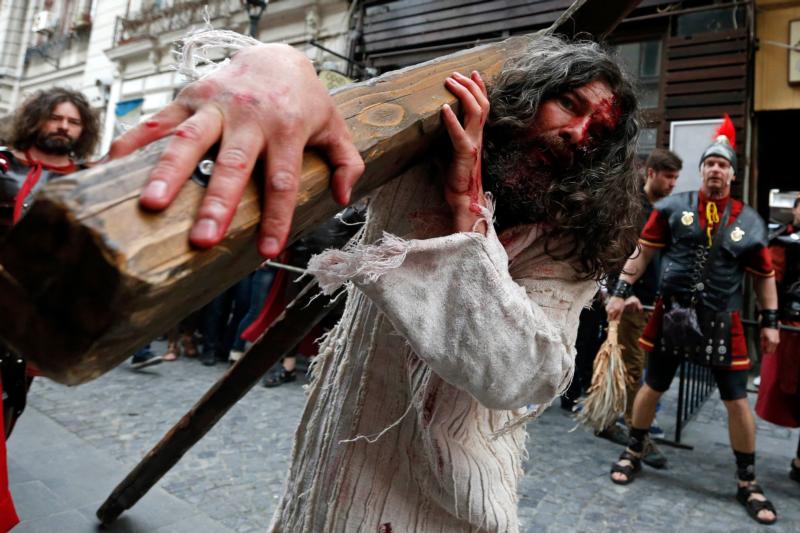 Actors take part in a re-enactment of the Way of the Cross, which commemorates the crucifixion of Jesus, during the Orthodox Holy Week celebrations in Bucharest April 15, 2014. Abiding in God’s love is a Lenten tradition and in John 3:16, Jesus says that God’s love for us is so great that God is willing to make the greatest of sacrifices — allowing his own son to die for the benefit of others. (CNS photo/Bogdan Cristel, Reuters)

Both the Gospel according to John and the epistle 1 John emphasize God’s love for us and state that if we are to have a relationship with God, we must be people who have and show love for others.

As 1 John 4:7-8 expresses it, “Beloved, let us love one another, because love is of God; everyone who loves is begotten by God and knows God. Whoever is without love does not know God, for God is love.”

There are three words in Greek that are translated into the English word “love”: “philia,” meaning affection as for a friend or family member; “eros,” which is used to express sexual feelings; and “agape,” which according to Strong’s Bible Concordance means goodwill, benevolence and esteem.

Throughout the New Testament, including the Gospel and the epistle of John, the word “agape” is used most frequently to describe our love for God and God’s love for us. The same word is used to describe how we are to love our neighbor.

So in Mark 12:30-31 when Jesus gives us the two great commandments — to love God and neighbor with all our being — the word “agape” is used for both expressions of love.

This also explains why St. Paul’s exposition about love in 1 Corinthians 13:13 (“So faith, hope, love remain, these three; but the greatest of these is love.”) is often translated as “charity” to make clear that it means more than having general affection for others — we are to hold them in esteem and treat them with benevolence.

John focuses on the idea of the love of God in several places in the Gospel. In John 3:16, Jesus says that God’s love for us (“agape”) is so great that God is willing to make the greatest of sacrifices — allowing his own son to die for the benefit of others: “For God so loved the world that he gave his only Son, so that everyone who believes in him might not perish but might have eternal life.”

For Jesus, abiding in God — which is what it means to be a disciple — requires us to go beyond giving alms or being kind to others. If we are to abide in God, we must give fully of ourselves.

John also addresses our loving relationship with God in 14:15-23 and 15:9-13. Here again the message is the same: To abide with God, we are to be people of charity, people who love God and our neighbors with all our beings.

As the saying goes, we must be all in. How will you show this love for others this Lent?

Mulhall is a catechist living in Louisville, KY.

PREVIOUS: At the heart of Lent is love, and charity that makes a difference

NEXT: Put loving at the top of your to-do list this Lent