At the heart of Lent is love, and charity that makes a difference 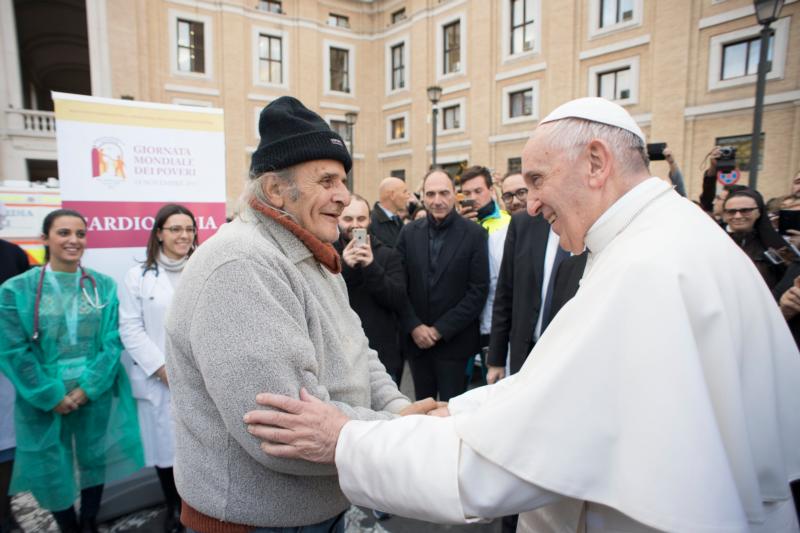 Pope Francis greets a man who is receiving treatment at charitable medical tents set up to treat the poor just outside St. Peter’s Square at the Vatican Nov. 16. Lent provides Christians with a special opportunity to practice charity, and Pope Francis has urged believers to pay close attention to the manner in which they attempt to serve people in need, to recognize their unique dignity “by looking them in the eyes and touching their hands.” (CNS photo/L’Osservatore Romano)

The sound of cymbals can add amazingly to the music of an orchestra or band. But a concert only of cymbals is hard for me to imagine. The loud, crashing sound of cymbals played alone for an hour or more might send an audience scurrying away, covering their ears with their hands.

St. Paul’s First Letter to the Corinthians employed the image of a “clashing cymbal” to devastating effect to help explain that there is no substitute for love in the Christian way of life (13:1-13). Paul wrote, “If I speak in human and angelic tongues, but do not have love, I am a resounding gong or a clashing cymbal.”

Speaking in the frankest of terms Paul said that “if I have the gift of prophecy and comprehend all mysteries and all knowledge; if I have all faith so as to move mountains but do not have love, I am nothing.”

Paul did not say that Christians must be nothing less than perfect in each and every attempt to express love. Thank goodness for that! But it distorts faith to classify love as just a secondary concern, he seemed to suggest.

No wonder love and charity — among Christians, these terms function virtually as synonyms — are accented heavily during the annual season of Lent. To contend at this time with Christ’s call to share love and to wrestle with the demands of love in a complex, conflicted and polarized world is to attempt to come to terms with the very heart of Christianity as a way of living.

Many know Lent as a special opportunity to practice charity by contributing money or food to people who cannot meet their basic needs or to organizations that serve them. This almsgiving is, indeed, a central Lenten goal. It is a vital dimension of Christian charity, which is a multilayered virtue.

Still, what truly defines charity for many Christian thinkers is the Christ-like way it aims to touch others’ lives. That means that recognizing the human dignity of these others is essential to Christian charity’s practice.

Recently, Pope Francis urged believers to pay close attention to the manner in which they attempt to serve people in need. Otherwise, their way of extending charity might shade any love in their action from view.

During his January 2018 visit to Chile, he mentioned the value of “coming out of our homes and looking at people’s faces,” and of “going out of our way to meet someone having a difficult time, someone who has not been treated as a person.”

I’m sure his words apply to many kinds of giving, whether that means money, food, kindness or other forms of support for others. But in a February 2017 interview he called attention particularly to what transpires when giving money to beggars.

How we reach out to those requesting help makes a real difference, the pope observed. This must be done, he said, “by looking them in the eyes and touching their hands.” For, “one can look at a homeless person and see him as a person or else as if he were a dog.”

So Christian love — charity, that is — recognizes a person’s unique dignity. In the Christian vision people are meant to be noticed and, when possible, addressed by name, as the weak, ailing beggar Lazarus was in Luke’s Gospel (16:19-31).

It is notable in the parable of the rich man and Lazarus that Luke introduces a beggar by name. This highlights Lazarus’ dignity as a person. Yet, the parable assigns no personal name to the rich man, who takes little, if any, notice of Lazarus, who was “lying at his door,” his body “covered with sores.” Lazarus hoped for only scraps of food from the rich man’s table.

“Love makes us similar, it creates equality, it breaks down walls and eliminates distances,” Pope Francis remarked in his 2014 message for Lent. He added that in addressing someone’s material poverty or lack of basic necessities, it is Christ who is addressed. For, “in the poor and outcast we see Christ’s face.”

Charity can be expressed in many ways and contexts, extended to individuals or communities, to family members, friends, neighbors, strangers and, yes, people we find difficult or who, perhaps, find us difficult. But “it is thrilling,” the pope said, to console “broken hearts” and to offer hope to people who experience darkness.

Love’s parameters are broad. What love will ask can never be anticipated fully. Love proves to be most demanding.

As Paul told the Corinthians, “love is patient,” and it is “kind.” It is not “jealous” or “rude” and “does not seek its own interests.” Neither does it “brood over injury.”

Lent focuses intently on conversion, which makes it a season that poses two vital questions: What will we turn toward? What — that perhaps is of less value or none — will we turn from?

Turn toward love, Paul surely would urge 21st-century Christians. Turn toward the challenging yet rewarding life of charity that makes so much difference.

PREVIOUS: What the norms say about Communion from the cup

NEXT: Abiding in God’s love