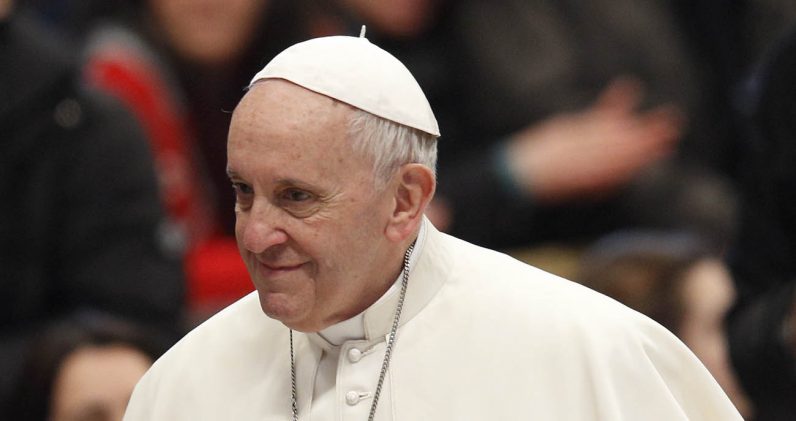 Pope Francis is pictured during his general audience in St. Peter’s Basilica at the Vatican in this Feb. 28, 2018, file photo. (CNS photo/Paul Haring)

VATICAN CITY (CNS) — Christians must let go of resentments and forgive those who have wronged them so that they may experience God’s forgiveness, Pope Francis said.

This can be particularly difficult when “we carry with us a list of things that have been done to us,” the pope said in his homily March 6 at morning Mass in the Domus Sanctae Marthae.

“God’s forgiveness is felt strongly within us as long as we forgive others. And this isn’t easy because grudges make a nest in our heart and there is always that bitterness,” he said.

The pope reflected on the day’s first reading from the prophet Daniel in which Azariah, one of three young men condemned to death in a fiery furnace, courageously prays for deliverance from God.

“Do not let us be put to shame, but deal with us in your kindness and great mercy. Deliver us by your wonders, and bring glory to your name, O Lord,” Azariah prayed.

Although Azariah is innocent of the crime he is condemned for, the pope explained, his attitude of recognizing his own personal sins is the same attitude Christian men and women should have when approaching the sacrament of penance.

“Accusing ourselves is the first step toward forgiveness,” the pope said. “To accuse one’s self is part of the Christian wisdom. No, not accusing others; (accuse) ourselves. ‘I have sinned.'”

God, he added, “welcomes a contrite heart” and when Christians readily admit their faults, “the Lord covers our mouths like the father did to the prodigal son; he does not let him speak. His love covers it, he forgives all.”

“These are the two things that help us understand the path of forgiveness: ‘You are great Lord, unfortunately I have sinned’ and ‘Yes, I forgive you 70 times seven as long as you forgive others,” Pope Francis said.

NEXT: Readings of the Holy Mass – Fourth Sunday of Lent