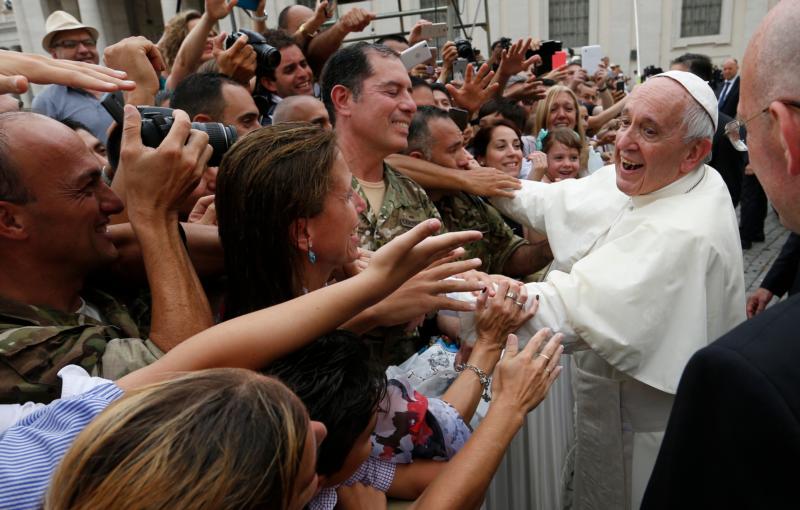 Pope Francis greets the crowd as he leaves his general audience at the Vatican June 28. Lent and Easter had come and gone by that papal audience, but the Christian call to sacrifice was very much on the pope’s mind when he addressed 12,000 pilgrims in St. Peter’s Square. (CNS photo/Paul Haring)

Lent and Easter had come and gone, but the Christian call to sacrifice was very much on Pope Francis’ mind when he addressed 12,000 pilgrims in St. Peter’s Square last June 28 during his weekly general audience.

Christians, he told those assembled, are called to detach themselves from power, reject violence and sacrifice themselves for God and others out of love.

“Indeed,” he declared, “a Christian who is not humble and poor, detached from wealth and power and, above all, detached from him- or herself, does not resemble Jesus.”

In other words, sacrifice is connected to rejecting the ways (the lure) of the world, a world that more often values self-gratification (frequently, instant self-gratification) above and even to the exclusion of self-denial.

Sacrifice — from the Latin “sacrificare” (“sacer,” sacred or holy; “facere,” to make) — implies that we who proclaim ourselves as followers of Christ have, by definition, a call to make the world a holier place in the image of our Savior, who made the ultimate sacrifice.

That does not mean we too are called to martyrdom, to offer our lives as Christ did, though throughout the past two millennia many — starting with Jesus’ own apostles — have done exactly that.

“The only perfect sacrifice,” states the Catechism of the Catholic Church, “is the one that Christ offered on the cross as a total offering to the Father’s love and for our salvation. By uniting ourselves with his sacrifice, we can make our lives a sacrifice to God” (No. 2,100).

Sacrifice, then, is about setting aside our needs out of love for each other, as Christ offered his life for us.

“It is right to offer sacrifice to God as a sign of adoration and gratitude, supplication and communion,” says the catechism, adding, “Every action done so as to cling to God in communion of holiness, and thus achieve blessedness, is a true sacrifice” (No. 2,099).

The latter teaching is from St. Augustine’s “De Civitate Dei contra Paganos” (“The City of God Against the Pagans”), a fifth-century work presenting human history as an ongoing conflict between the “Earthly City” (or City of Man) and God’s people (or City of God). Augustine argues that the latter — marked by people who forego earthly pleasure to dedicate themselves to the eternal truths of God — ultimately will emerge triumphant.

“The Lord is the goal of human history,” states the Pastoral Constitution on the Church in the Modern World, “Gaudium et Spes, “the focal point of the longings of history and of civilization, the center of the human race, the joy of every heart and the answer to all its yearnings.”

Lent is a time in which Christians seeking that answer to their yearnings are reminded to embrace sacrifice, not simply for the 40 days of the season, but as part of daily living:

— To ask themselves, What — as in, how much of the world’s riches — do I need to be happy?

— To look beyond their needs to those of others, especially those less fortunate.

— To bring themselves closer to God’s word through prayer, fasting and almsgiving — to practice what they profess to believe.

In a Catholic Christian context, sacrifice is closely connected to (if not precisely interchangeable with) two other “S” words, surrender and service. Each relies on the others to be fully present and effective.

If we do not surrender in acknowledgement of the power of God, how can we make sacrifices in God’s name? If we do not sacrifice ourselves, forsaking our needs and our desires in favor of others, how can we truly serve others as Christ served? And if we do not serve one another, how can we proclaim that we have surrendered to God’s will?

The catechism drives home the point, saying, “Outward sacrifice, to be genuine, must be the expression of spiritual sacrifice: ‘The sacrifice acceptable to God is a broken spirit’ (Ps 51:17)” (No. 2,100). Surrender, in other words, is the first step.

With regard to service, the catechism points out that Old Testament prophets “often denounced sacrifices that were not from the heart or not coupled with love of neighbor.” Jesus himself quoted Hosea: “It is loyalty that I desire, not sacrifice, and knowledge of God rather than burnt offerings” (6:6).

What does this all mean, on a daily, practical basis? It begins with surrender — or reconciliation with Christ — asserts Pope Francis. And that requires sacrifice.

“Ambassadors of reconciliation are called, in (Jesus’) name, to lay down their lives, to live no more for themselves but for Christ who died and was raised for them,” the pope said Jan. 25, 2017 (six months before his audience talk mentioned earlier), during an ecumenical prayer service in Rome that concluded the Week of Prayer for Christian Unity.

That sacrifice, he said, is twofold: first, to set aside “fashions of the moment,” plans and advantages, and instead look constantly to the Lord’s cross; and second, to forgive.

“To be fixated on the past, lingering over the memory of wrongs done and endured, and judging in merely human terms, can paralyze us and prevent us from living in the present,” said Pope Francis.

So let go of the past. Be present to the needs of today’s world. Sacrifice.

PREVIOUS: Victory of love: Jesus’ sacrifice on the cross has power for our lives

NEXT: Know the history and the reasons for Lenten fasting