Know the history and the reasons for Lenten fasting 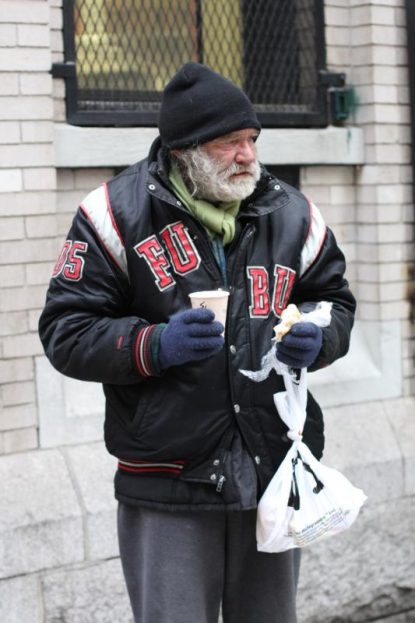 A man holds a cup of coffee and a bag of food that he received at the St. Francis of Assisi Church Breadline in New York on Ash Wednesday, March 5, 2014, the beginning of Lent. Throughout the centuries churches developed liturgical practices to go along with Lent, believing self-denial to be spiritually important but insufficient. The bishops introduced the practice of almsgiving, and giving to the poor was viewed as a positive way to honor Lent since it effectively involved self-denial. (CNS photo/Gregory A. Shemitz)

Fasting is a method that people can use to limit or deny their physical desires for a higher, often spiritual, goal.

Fasting was widely practiced among the ancient Jews, usually before important feast days. It was also practiced by disciples of John the Baptist.

As a Jew, Jesus would have fasted, his disciples likewise fasted, and the earliest Christians followed in that path. The New Testament speaks of fasting, but the Bible and other early sources simply do not include many statistics. Initially fasting was not universal.

Yet Jesus’ example would win out, and the early Christians decided that they also would fast. By the second century, Wednesday and Saturday were treated as fast days in individual churches.

As fasting became increasingly accepted, the early Christians decided to follow the Old Testament practice of fasting before major feast days. For the believers, the most important feast day was Easter, commemorating the Resurrection because, as the apostle Paul had said, “If Christ has not been raised, (our) faith is vain” (1 Cor 15:17). The supreme feast deserved a preparatory fast.

The initial pre-Easter fast was only a few days, and Christian leaders soon concluded that such a brief time did not adequately presage so crucial a feast. They looked to the Gospels and decided to imitate the Lord by having a fast of 40 days.

This widespread practice was approved by the bishops of the first ecumenical council, Nicaea, in 325, thus making Lent a universal practice.

The initial observance of the fast was very demanding. Christians could eat only one full meal per day. Many churches forbade the consumption of meat, fish, eggs and delicacies at the risk of violating the spiritual value of the fast.

The churches soon developed liturgical practices to go along with Lent, believing self-denial to be spiritually important but insufficient. The bishops introduced the practice of almsgiving. If one wished to do more than just deny bodily satisfaction, giving to the poor was a positive, practical way to do so since it effectively involved self-denial.

Another — but quite modern — form of self-denial was depriving one’s self of some personal enjoyment, such as not going to a movie or a sporting event and donating the funds to a charity. Simply making larger than usual donations to charity would also be a form of self-denial.

Some modern Catholics question the value of self-denial during Lent, since retailers make Easter a secular holiday that leads young believers, caught up in the secularity before Easter, to have difficulty with the religious aspects of Lent.

But modern secular values cannot triumph over a feast that is two millennia old. Every so often, we must say “No” to such a travesty. When religious people fast, they know why they do so, and they are reminded of the good reason for the practice.

To all readers, a blessed Lent and a truly Happy Easter.

NEXT: This Lent try a new sacrifice — adopt an attitude of gratitude