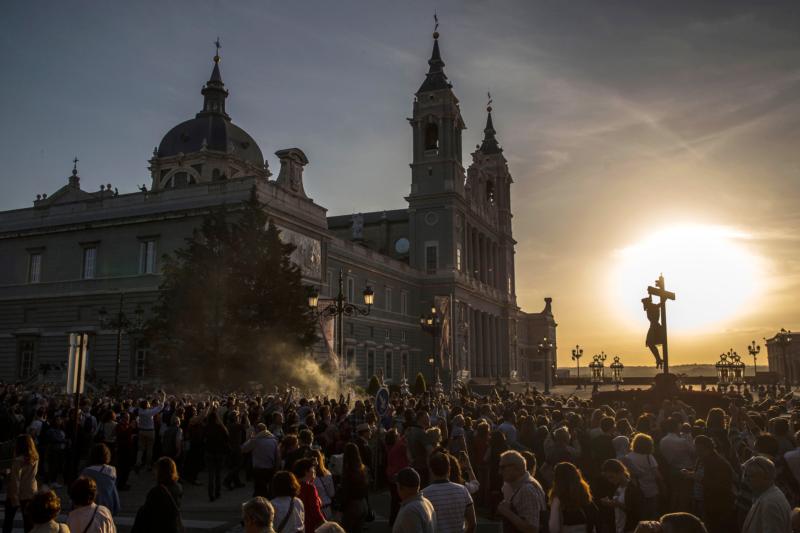 A silhouette of the Crucifixion is seen outside the Cathedral of Alabarderos in Madrid Good Friday, April 14, 2017. Jesus did not use his gifts for his own gain or to escape but humbled himself for a greater good — our salvation — and accepted the crueler fate, death on the cross, setting an example of humility for all Catholics, especially during Lent. (CNS photo/Emilio Naranjo, EPA)

To me, two of the most striking and humbling passages in the Bible are from Mark 14:53-65 and Mark 15:1-5, where Jesus is grilled first by the Temple hierarchy and then by Pilate about his identity.

By this point in Scripture, Our Lord has cured the sick and lame, and expelled demons. He has multiplied loaves and fishes. He has walked on water. And he stands before his accusers, undoubtedly knowing he could take one breath and destroy them and free himself.

Yet, he does nothing, says very little. Much like in the beginning of his ministry, when he withstood temptation in the desert (Mt 4:1-11), Jesus does not use his gifts for his own gain or to escape, but humbles himself for a greater good — our salvation — and accepts the crueler fate, death on the cross.

Today, with the pervasive tendency to wildly celebrate victories and talents large and small, Jesus’ example of humility might seem utterly strange.

Ours is a very competitive world. Aren’t we supposed to drown out the competition or defy naysayers by letting everyone know who we are and what we can do in whatever way we can, from billboards to bumper stickers (“My child is an honor student at “St. Name-the-School.”)?

Isn’t that, according to another passage, Matthew 5:14-16, the way to let our “light” shine before others?

As someone whose vocation of writing and speaking rests in a competitive arena, I confess I often fumble with balancing promotion of my skills and work with my desire to live in a humbly Christian manner.

But although I’ve had my own celebratory moments, I’ve had some practical lessons that help set a more hospitable table for the bounty of God’s gifts while understanding better their use and purpose.

For example, in my first year of a master’s program in playwriting, I was very happy about a play I’d written. “It’s so good!” I crowed to a friend who was a theater producer.

“Never say that,” he replied.

His words had the effect of a cold bucket of water poured over me. Was I supposed to not like my work? Not think it was good?

He continued, “Let others say it.”

In this brief exchange, I realized that, yes, it is all right to try to make our work as excellent as possible and believe that it is so. But we have only finite understanding of anything we do.

Egotism –“I am the reviewer, arbiter, judge of what I do” — stunts the growth of humility, whereas sharing our work and our lives with others invites feedback and personal and professional growth.

A voice teacher helped with another aspect of humility. I had been receiving a lot of compliments on my singing. “But what to say in reply?” I asked her.

Her emphasis on appreciation has stuck with me: Any good gift comes from God, and when others express admiration for that gift, it only makes sense to give credit where credit is due: to the Creator.

A third lesson from writing helped me understand the responsibility we have toward the gifts God gives.

“Who is this for?” asked one of my mentors about an early book-in-progress, something I wanted to write. “Never forget the reader.”

And, in a broader sense, whatever we give or do, someone else is on the receiving end. Much better to ask, “Who will I/this help?” than “What can I do for myself?”

Mindfulness of others, gratitude, our constant need for growth and improvement — these help me balance the uneasy coexistence of moving about in this competitive world while striving to live my faith.

And when I fail and I do wildly celebrate, Jesus’ steady example, silent and strong, always brings me back to center — a blessing for which I am ever and very humbly grateful!

PREVIOUS: A litany of humility for the everyday

NEXT: Humility: A Lenten reflection