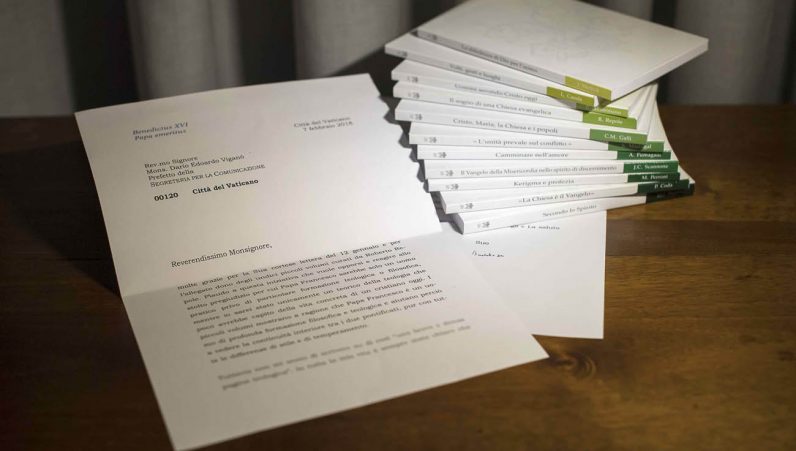 An image showing a letter from retired Pope Benedict XVI to Msgr. Dario Vigano, prefect of the Vatican Secretariat for Communication, is seen in this photo released by the Vatican March 12. On March 14 the Vatican admitted that it blurred the last lines in the image of the letter. (CNS photo/Vatican Media)

WASHINGTON (CNS) — What was meant to be an intellectual tribute to Pope Francis has instead become the backdrop to the latest tempest over transparency and this pontificate.

On the eve of the fifth anniversary of the election of Pope Francis, the Vatican publishing house, Libreria Editrice Vaticana, unveiled a series of 11 books focusing on the intellectual roots and thought of Pope Francis.

Numerous theologians contributed to the volumes, and they are being published in several languages.

In a press conference attended by Catholic News Service, Msgr. Dario Vigano, prefect of the Vatican Secretariat for Communication who oversees LEV, explained that he had asked retired Pope Benedict to “write a page or a page and a half of dense theology in his clear and punctual style that (we) would have liked to read this evening.”

Pope Benedict responded with “a beautiful, personal letter,” Msgr. Vigano said. The retired pope explained that he could not write a theological reflection on the 11 volumes because he had not read them and would be physically unable to do so in time for the March 12 presentation. However, he expressed the hope that the series would contradict “the foolish prejudice of those who see Pope Francis as someone who lacks a particular theological and philosophical formation ….”

Pope Benedict said the books “reasonably demonstrate that Pope Francis is a man with profound philosophical and theological formation and are helpful to see the interior continuity between the two pontificates, even with all the differences in style and temperament.”

However, when the Secretariat for Communication released a photo of the first page of the letter, two lines at the end of the first page were blurred out, making it look as if someone had intentionally obscured the fact that  Pope Benedict had not read the series, and leaving only the words defending his successor.

At this point, the blurring, not the book series, became the story. As reported by the Associated Press’ lead Vatican reporter, Nicole Winfield, “The Vatican admitted Wednesday that it altered a photo sent to the media of a letter of retired Pope Benedict XVI about Pope Francis. The manipulation changed the meaning of the image in a way that violated photojournalist industry standards.”


Sources at the Vatican explained that the letter itself was never intended to be made public, which was why the second page was obscured in the carefully staged photo. One source called it a “photo illustration.”

U.S. photojournalists adhere to strict standards regarding any sort of manipulation of a photographed image. AP norms, which are followed by Catholic News Service, state that “no element should be digitally added or subtracted from any photograph.”

Whatever the intention on the part of the Vatican Secretariat for Communication, the obscuring of a portion of the letter suggested something they did not want everyone to see. Read in this context, Pope Benedict could be seen to be qualifying his generic support for the publication of the series.

For those who attended the press conference, the context of Pope Benedict’s comments was clear, and the fact that Msgr. Vigano read out loud the lines that were subsequently obscured in the image makes the incident sound more like a matter of poor judgment than deception.

The controversy comes on the heels of the publication of Pope Francis’ World Communications Day message, which criticized the phenomenon of “fake news,” defining the phrase as “false information based on nonexistent or distorted data meant to deceive and manipulate the reader.”

The entire incident is a reminder that in a media-sophisticated age, with a media-omnipresent pope, the Vatican communications apparatus must be committed both to transparency and to best journalistic practices. Anything less is a disservice to the church.

Erlandson is director and editor in chief of Catholic News Service.

PREVIOUS: You can freeze embryos, but not consciences

NEXT: Authentic dialogue for our times