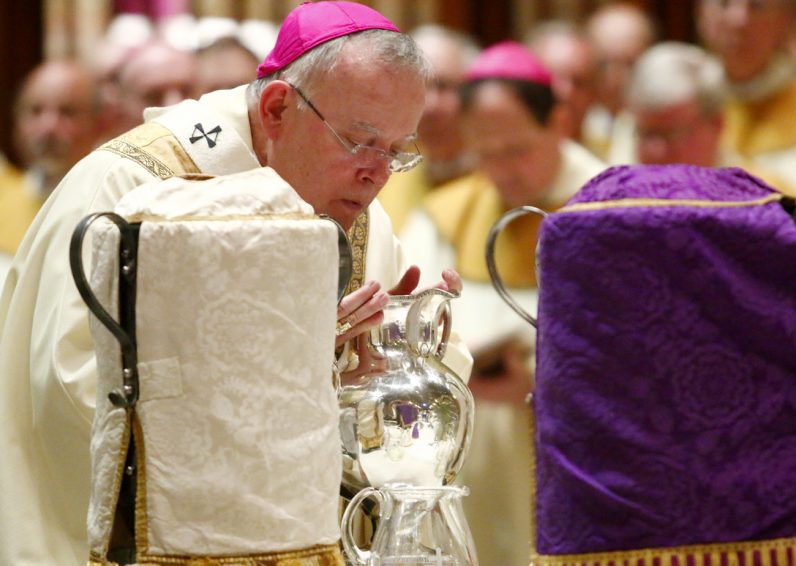 Archbishop Charles Chaput blesses the Oil of Catechumens, the Oil of the Sick and the Oil of Chrism during the Chrism Mass in 2017 at the Cathedral Basilica of SS. Peter and Paul, where he will again celebrate and preach at the Chrism Mass this year on Holy Thursday, March 29. (Photo by Sarah Webb)

Christians throughout the world will mark the passion, death and resurrection of Jesus Christ with special liturgies this week during the sacred triduum – the three days of Holy Thursday, Good Friday and Holy Saturday – leading up to the solemnity of the resurrection at Easter.

The Cathedral Basilica of SS. Peter and Paul, the mother church for Catholics in the Archdiocese of Philadelphia, will host the following liturgies during the triduum. (See a listing to find a Catholic church in the archdiocese so you can attend one or all of the liturgies in your local area.)

The cathedral is located at 18th Street and the Benjamin Franklin Parkway in Philadelphia.

Archbishop Charles J. Chaput will be the principal celebrant and homilist. All archdiocesan priests are invited to concelebrate with the archbishop and to renew their priestly promises.

During the Mass Archbishop Chaput will bless the Oil of Catechumens as well as the Oil of the Sick and consecrate the Oil of Chrism. These holy oils will be used at parishes throughout the archdiocese during the coming year in the celebration of the sacraments.

The Chrism Mass will be streamed live at www.archphila.org as well as on Archbishop Chaput’s Facebook page at www.facebook.com/ArchbishopChaput. Additionally, the Mass will be broadcast live on Domestic Church Media, on Holy Spirit Radio 1420 AM and 1570 AM and The Catholic Channel on Sirius XM.

Archbishop Chaput will be the principal celebrant of the Mass and Msgr. Michael K. Magee, a professor at St. Charles Borromeo Seminary, will preach the homily.

After the homily, following the example of Christ who washed the feet of the apostles at the Last Supper, Archbishop Chaput will wash the feet of 12 seminarians from St. Charles Borromeo Seminary. Adoration of the Most Blessed Sacrament will continue until 11 p.m.

Celebration of the Passion of the Lord, 3 p.m., Good Friday, March 30

Auxiliary Bishop Michael J. Fitzgerald will preside and preach at the solemn Liturgy of the Lord’s Passion, commemorating the holy passion and death of Jesus Christ. During the three hours between 12 noon and 3 p.m. confessions in the sacrament of penance will be heard, as well as the following devotions: the Office of Readings at noon; the Way of the Cross at 1 p.m.; and a meditation on the Seven Last Words of Christ at 2 p.m. The liturgy celebrated by Bishop Fitzgerald, beginning at 3 p.m., will conclude the public observance.

After a reflective and intense period of prayer during Lent, catechumens (those who will receive baptism) and candidates (those who have been baptized in other faiths or baptized a Roman Catholic) will become full members of the Catholic Church at the cathedral and at other parishes throughout the archdiocese at the Easter Vigil and during Easter time.

This year close to 500 new Catholics will be welcomed into the church over Easter.

Archbishop Chaput will be the celebrant and homilist at the Mass of the Resurrection of the Lord. Other Masses on Easter Sunday at the cathedral include 8 a.m., 9:30 a.m., 11 a.m. (Solemn Mass) and 2 p.m. (Spanish Mass in Cathedral Chapel.) There will not be a 6:30 p.m. Mass.

NEXT: Under investigation, pastor of Northeast Philly parish placed on leave