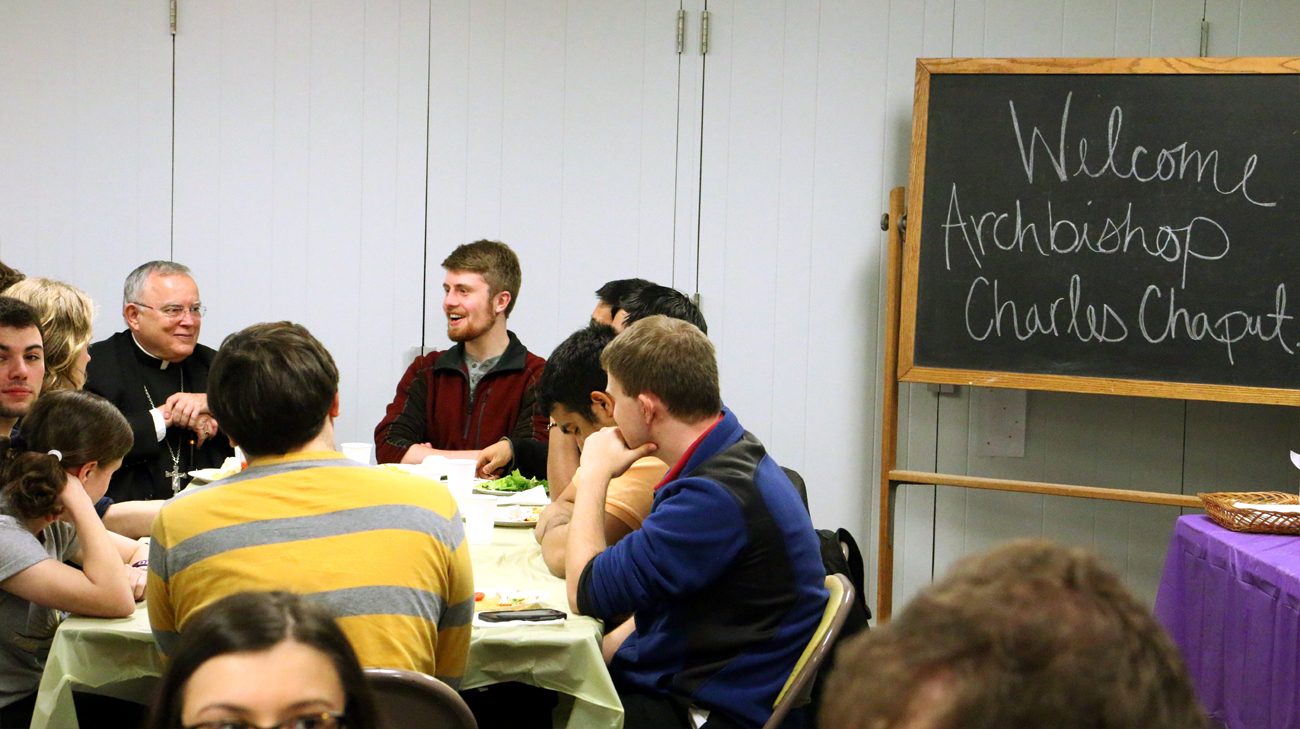 Archbishop Charles Chaput chats with Zane Christmyer, a senior at West Chester University, and fellow students at the Newman Center where the archbishop visited for dinner followed by a question-and-answer session Friday evening, March 23. (Photo by Sarah Webb)

Archbishop Charles Chaput visited the West Chester University Catholic Newman Center on Friday night, March 23, participating in a dinner and discussion with 48 students. Questions were encouraged and many students took advantage of this unique opportunity to talk with the archbishop in a personal setting.

Upon his arrival, Archbishop Chaput was greeted and given a tour of the Newman Center by campus chaplain Father Tom Gardner and the center’s assistant director, Dan Pin. They reviewed the chapel that was renovated last spring and is now used for Sunday Masses on the campus. The renovation was made possible by the Archdiocese of Philadelphia and other generous donors.

As he entered the Newman Center, Archbishop Chaput shook hands with each of the students before sitting down for the meal. After a prayer was recited, guests filled their plates with a meatless Lenten Friday dinner and sat to converse with one another as the archbishop came around to each table and made a point to sit and connect with each student.

Senior Laura Riebe, an active member of the Newman Center, was impressed by Archbishop Chaput’s willingness to spend time on the university’s campus with students.

“Clearly, the archbishop has many obligations but he was very intentional during his visit here at West Chester,” she said. “The way he took time to encounter every person in the room shows how he really cares for the Catholic youth and wants to invest in them accordingly.”

Once dinner concluded, Archbishop Chaput took his place in the center of the group to begin the question and answer session. He told them briefly about his life and spiritual journey including when he joined the seminary at the young age of 13. Then students were encouraged to ask the archbishop questions about his experiences or opinions in addition to thoughts about the teachings of the Catholic Church.

Many hands were raised high and the archbishop fielded several questions on topics including homosexuality, contraception, the importance of family and several other ideals that are being challenged by current cultural practices. The archbishop answered all of the questions honestly and thoughtfully.

Freshman Julia Marinaccio said she gained a better understanding of Catholic teaching regarding homosexuality. “It’s such a big topic in today’s society and I was confused on how I should look at it faithfully,” she said, “but he explained everything very well.”

Giovanni Mowrey, a West Chester senior, thought the archbishop “did a great job of relating the teachings of the church in a way that we could understand them. I hope that he inspired us to follow God’s call in each of our lives.”

Heads bowed as the archbishop raised his hands to bestow a blessing upon the guests in the room before his departure.

Students expressed their appreciation to the archbishop for his time and willingness to share knowledge about the Catholic Church.

They agreed the enjoyable evening of faithful and fruitful conversation was beneficial to all who attended, and that it provided encouragement for young Catholics to continue pursuing their faith and spreading God’s word.

Madeline Conte is a senior at West Chester University. 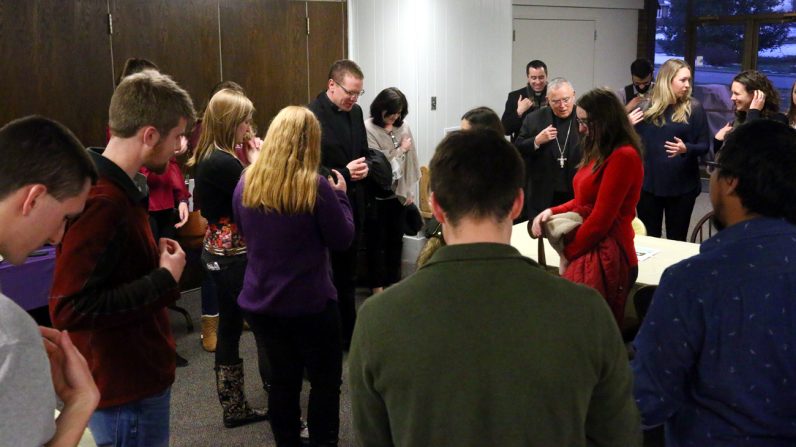 PREVIOUS: Mass for persons with disabilities reminds of new life to come