Faithful of Bucks County reach out and feed homeless neighbors 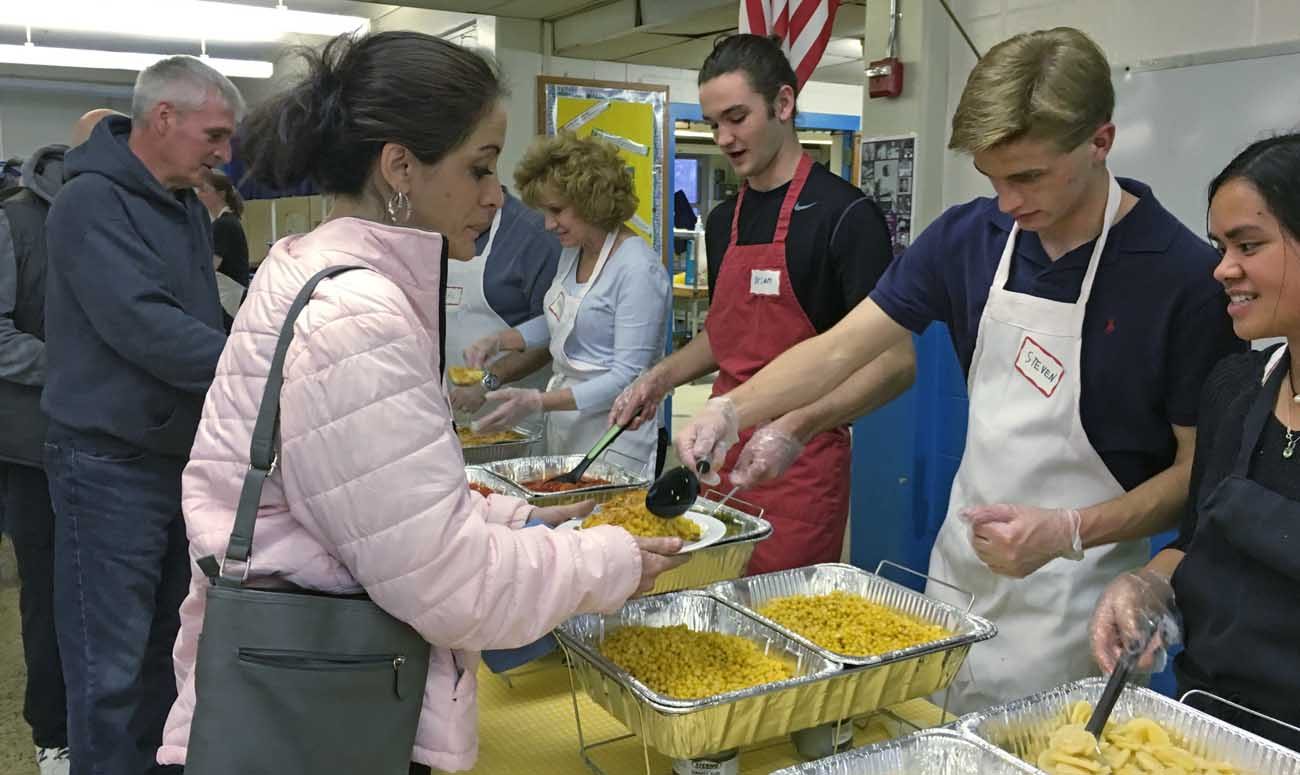 Guests receive free dinners of tuna casserole and baked macaroni with all the trimmings from volunteers March 23 at St. John the Evangelist Parish, Morrisville. The parish serves a meal and offers personal items to guests on the fourth Friday of every month, part of the Advocates for the Homeless and Those in Need, an interfaith social outreach group in Bucks County. (Peg Quann)

Despite spring’s arrival, it was a Code Blue night March 23, so many of the homeless people who usually participate in the free Shared Meal event each month at St. John the Evangelist Parish Hall in Morrisville didn’t come. Instead, they were bused to an overnight shelter at a nearby Methodist church.

Still, about 25 people — including those who live in their vehicles, boarding houses or who have found modest homes they can afford — came to enjoy the meal and hospitality that St. John’s parishioners have offered the fourth Friday evening of every month since February 2016. Normally, about 50 to 70 people enjoy the free meal.

For Lent, the meal consisted of heated tuna casserole and macaroni and cheese, with a Caesar salad and soup on the side, and a variety of Easter-themed desserts. Coffee, tea, juice and water also were served.

In other months, sliced ham, lasagna, roast beef or other homemade favorites have been offered buffet-style, with guests dining at decorated cafeteria tables set with regular plates, utensils and cloth napkins.

The parish is one of 35 houses of worship in Bucks County that offer the free meals on a daily rotation, every day of the week, through the Wheels to Meals program sponsored by the Advocates for the Homeless and Those in Need (AHTN). The organization’s two buses transport the homeless and others to the religious centers for the meals and, on Code Blue nights, to shelters set up in some of the churches.

St. John’s is the only Catholic parish in Bucks County currently participating in the ecumenical program on a regular basis, along with many Protestant churches, a synagogue and Muslim worship sites. St. Thomas Aquinas Parish in Croydon also offers fill-in meals when necessary on the daily meal schedule, and soon St. Ignatius of Antioch Parish in Yardley will do so. 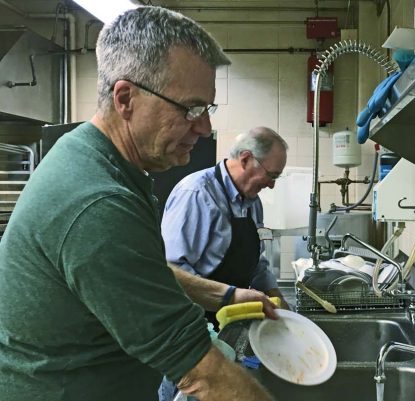 The parish’s efforts have not gone unnoticed by the people the program serves. Word on the street is that there’s good food and other necessities to be had at St. John’s.

“It’s a big-time blessing. They do a very good job. They go above and beyond,” said Tom, who was homeless but now lives in a boarding house in Trenton.

He’s also grateful for the clothing, socks, gloves and personal hygiene products that are offered free of charge at the back of the parish hall. “A lot of people get cold outside and their socks get wet,” he said, explaining why fresh supplies are so important.

“I appreciate this. We enjoy the food. It’s cooked food,” said Jose Peralta, who lives in a boarding house in Bensalem with his wife, April Perkins. She liked that it’s an evening out from their cramped quarters.

In the summer of 2015, Thomas Burke, a member of St. John’s pastoral council, asked former pastor Msgr. Joseph Prior if the parish could participate in the free meal program. By the following February, after insurance issues had been worked out between the AHTN and the Archdiocese of Philadelphia, St. John’s came on board to serve meals on the fourth Friday of the month.

Members of the parish’s Social Concerns Committee also helped to organize the effort, recruiting families to donate supplies for the meals, to sit and socialize with the guests and/or to help with the preparations or cleanup.

Professionals, homemakers, retirees and teens all volunteer. A few parishioners have even received specialized training as bus drivers and attendants to bring the homeless to the event or to serve in the overnight shelters.

“The guests tell me this is one of the nicest (meal sites),” Burke said. “You’re actually helping people – with saving lives. This could be their only meal (of the day). The guests are extremely grateful.”

Paul, a homeless man who attended the March 23 event, agreed. “Without this organization, I don’t know where I’d be or how I’d survive,” he said. He’s been homeless for two years and is almost age 50.

Nancy Vogt, administrative consultant for AHTN, said Paul always tries to give back, helping with moving cots from one shelter location to another.

“It’s a great organization. It’s a blessing to be involved with this,” she said.

Vogt noted that AHTN works with the Bucks County Opportunity Council and Penndel Mental Health Center, which offers psychological services at the overnight shelters as well as two veterans organizations, Hope for Veterans and Right 2 Salute.

The groups coordinate efforts to provide housing, counseling and other services for those living on the streets or struggling to maintain their homes. Anyone is welcome to come to the free meals – no questions asked.

AHTN will hold an orientation program April 10 for those who want to volunteer at the overnight shelters next winter or as bus drivers or attendants for the homeless.

Sister of St. Joseph Marganne Drago, pastoral associate and director of liturgical ministry at St. John’s, led the guests and volunteers in prayer before the meal.

“It’s wonderful … this is the work of evangelization in action,” she said, adding her belief that through their perseverance in difficulties, the homeless feed the spirituality of those who serve them. “They inspire me,” she said.

Volunteer Dorothy Kenny, who helps run the distribution of clothing and toiletries, said she really enjoys helping those in need, while another parishioner, Andrea DiGregorio, said she’s touched by her conversations with the guests.

“Their stories just tug at your heart,” she said. “They look forward to coming here; they really like the food.”

As he watched the meals being served last Friday night, St. John’s pastor, Father Timothy O’Sullivan, said his parishioners should be proud. “Through their kindness and dedication,” he said, “they’re literally bringing the corporal works of mercy to life.”

For more information on making a donation or volunteering with the Advocates for the Homeless and Those in Need, visit the website ahtn.org.

Sister Marganne Drago, S.S.J., pastoral associate and director of liturgical ministry at St. John the Evangelist Parish in Morrisville, leads guests and volunteers in prayer before the meal shared with the homeless and disadvantaged people in the parish hall Friday night, March 23. Diane Coyle, a coordinator of the parish’s Social Concerns Committee, stands to Sister Marganne’s right. “We’re thrilled we were able to do it,” Coyle said of the meal program. (Peg Quann)

NEXT: Mass for persons with disabilities reminds of new life to come