Mass for St. Katharine Drexel held not at shrine, but cathedral 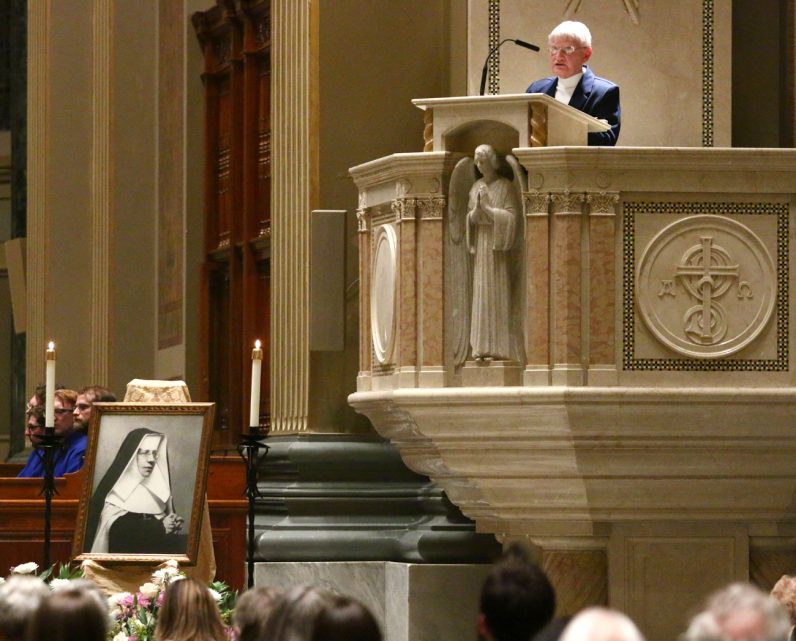 Sister of the Blessed Sacrament Patricia Suchalski proclaims the second reading at the Mass for St. Katharine Drexel, founder of the congregation, March 3 at the Cathedral Basilica of SS. Peter and Paul. (Photo by Sarah Webb)

Faithful from the Philadelphia Archdiocese came to pray on the feast of St. Katharine Drexel and the 63rd anniversary of her entrance into eternal life last Saturday evening, March 3, at a Mass at the Cathedral Basilica of SS. Peter and Paul.

St. Katharine is best known for founding the Sisters of the Blessed Sacrament, with an apostolate of prayer and service to Native Americans and African Americans through schools and missions throughout the country.

Actually her death anniversary was memorialized for many years at the cathedral, especially during the period leading up to her 1988 beatification and 2000 canonization.

St. Katharine in life was no stranger to the cathedral. During her childhood and early adult years, she was a frequent worshipper there. Her father, investment banker Francis Anthony Drexel, was a generous contributor to its 1846-1864 construction.

After his death his three daughters, older sister Elizabeth, Katharine and younger sister Louise, funded the side altar at the rear left of the cathedral. It was dedicated to his memory and to that of Katharine’s beloved stepmother, Emma Bouvier Drexel. St. Katharine’s birth mother, Hannah Langstroth Drexel, as so often happened in that era, died shortly after she was born. 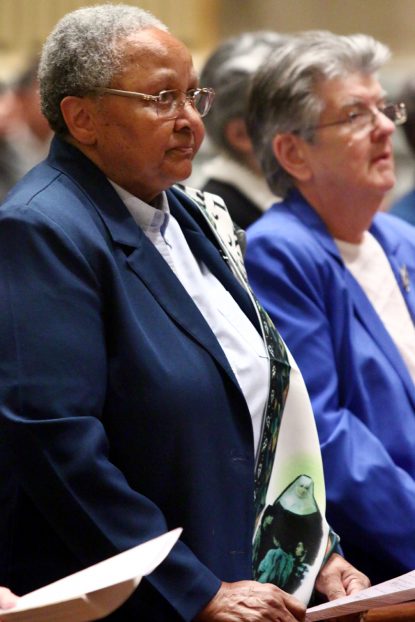 St. Katharine’s own funeral Mass was celebrated at the cathedral by Archbishop John F. O’Hara on March 7, 1955. Following the Mass her remains were taken to her motherhouse, St. Elizabeth Convent in Bensalem, where they were enshrined under the convent chapel.

More recently, in 2009, the Drexel memorial altar in the Cathedral was renamed as a Shrine to St. Katharine, with the addition of an impressive marble statue of the beloved saint.

The Sisters of the Blessed Sacrament, founded by St. Katharine in 1891, have like so many religious congregations experienced a drastic decline in vocations. Today most of the remaining sisters, now aging, have relocated to Paul’s Run, a retirement community in Northeast Philadelphia.

The sarcophagus of St. Katharine will in the coming months be moved to the cathedral, and to the very spot she and her two sisters funded as a memorial to their beloved parents.

At the feast day Mass for St. Katharine last Saturday, the celebrant was Father Gerald Dennis Gill, the cathedral rector. In his homily he spoke of the tremendous gift St. Katharine has been to the church, using the example of the Samaritan woman at the well in St. John’s Gospel.

“She thirsted for the living water and in her own life the living water overflowed in many wonderful ways,” Father Gill said. In her work with people on the margins, and now in this new beginning, “this holy woman will inspire us in our living Christian witness.”

Many of the Sisters of the Blessed Sacrament attended the Mass, including Sister Donna Breslin, the current president of the congregation.

“The liturgy was beautiful,” she said, and she thanked Father Gill for drawing the reference to water in his homily because “Mother Katharine always trusted in that living water.”

Ann deMarco, who assisted at St. Elizabeth Convent for years, is also a guide at the cathedral. While she was sad to see the convent closed, “I’m thrilled St. Katharine is coming here,” she said.

Bob Gutherman, who was the recipient of the miracle cited for Mother Katharine’s beatification, also attended the Mass. He saw the move to the cathedral as a positive, although he too was sad to see the Bensalem shrine close.

“People can come here right in the center of the city” eventually to pray at St. Katharine’s shrine, he said. “When Pope Francis came to Philadelphia many of the pilgrims were not able to visit her shrine,” he said, adding “This is a great tribute to the Drexel family.”

As for humble St. Katharine herself, her stated desire was to be buried in the little convent cemetery beside the sisters who first joined her congregation. God had other plans. St. Katharine, pray for us. 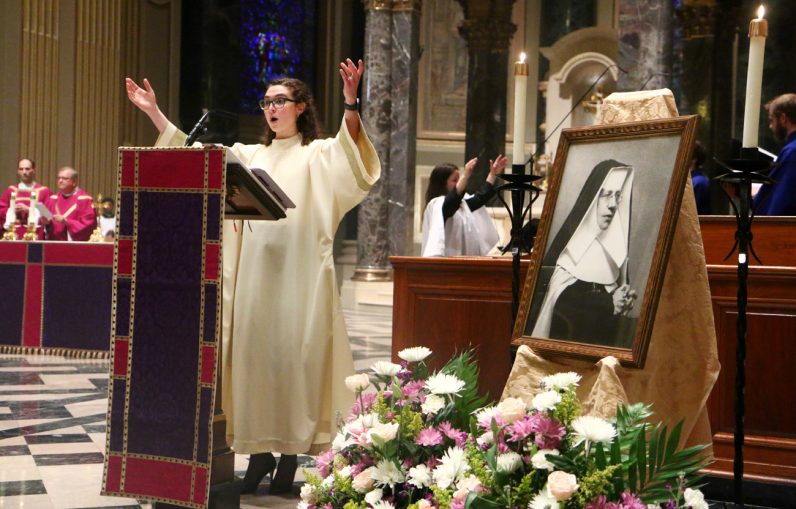 A cantor leads the congregation in song during the Mass on St. Katharine Drexel’s feast day, March 3, at the Cathedral Basilica of SS. Peter and Paul celebrated by its rector, Father Dennis Gill (background, left). (Sarah Webb)