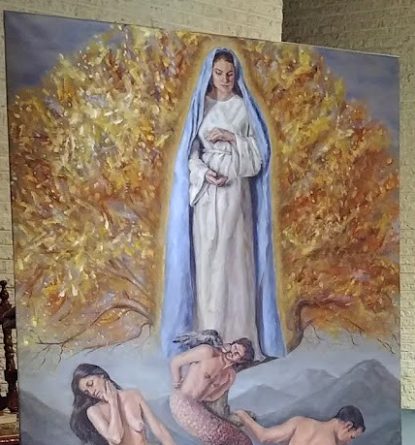 The beauty of creation turns our hearts and minds toward God, and capturing that beauty to inspire deeper prayer was the goal of a March 22 presentation at St. Isaac Jogues Church in Wayne.

“Praying with Sacred Art: A Night of Adoration with Sacred Imagery” drew approximately 80 attendees who began an evening of prayer and eucharistic adoration with a talk by Philadelphia artist Kate Capato, the founder of Visual Grace studio.

The event featured a number of Capato’s paintings, which depict faith-based images designed to inspire prayerful reflection. “Invitation to Mercy,” one of the works on display, juxtaposed Mary’s obedience to God with Adam and Eve’s rebellion. Created for an international Theology of the Body conference in 2016, the piece invited viewers to consider their response to God’s offer of reconciliation.

The evening was arranged by Joe Aquilante, the youth minister at St. Isaac Jogues.

“We were hoping for people to have a greater appreciation of the beauty of sacred art,” said Aquilante. “Our goal was to help to open up the minds and hearts of people in our parish to appreciate it in a way that they haven’t before.”

According to several attendees, Capato’s images did just that.

“I think it allows you to imagine more in prayer what happened in that particular scene,” said Marisa Baldassano of Visitation B.V.M. Parish in Trooper. “Hopefully, it can help allow you to enter deeper into prayer.”

“I think it just adds something visual,” she said. “It’s another form of using a sense to get to God, versus auditory with music. A lot of parishes don’t have the kind of sacred art that’s all over the churches in Rome and other beautiful cathedrals, so it’s really beautiful to see Kate’s. I try to picture it above me like something on the Sistine Chapel.” 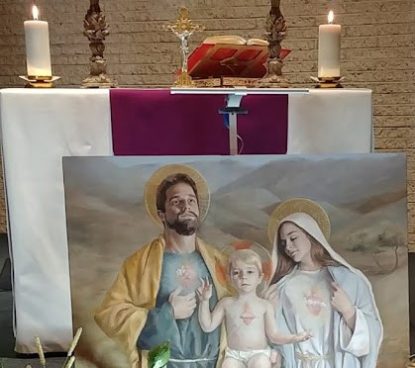 During the evening, Capato unveiled a new work, a portrait of the Holy Family called Home.

Participants were then invited to spend time in adoration before the Blessed Sacrament, and to meditate before three pieces painted by Capato, who recently returned to the U.S. after two years at the Sacred Art School in Florence, Italy.

While abroad, Capato studied the historical context of sacred art and its theological implications throughout the centuries. In her presentation, she referenced the work of German Catholic philosopher Dietrich von Hildebrand and of Pope Francis to describe the effect of sacred art on the mind and heart.

“My hope is that people were able to get to place of stillness and just receive whatever God wanted them to receive tonight,” said Capato.

In describing her artistic approach, Capato stressed the importance of remaining open to the Lord’s guidance.

“There’s a lot of prayerful parts, but then there’s the human in me where I just want to get this color right or this hand right,” she said. “I’m always saying, ‘Lord, you just have to paint through me, because I have all these visions and hopes.’ I have learned a lot, but I know there’s so much more to learn, so a lot of times I’m just like, ‘Let me get out of the way so you can paint.’”

NEXT: Cardinal Burke to head speakers on marriage at Cathedral