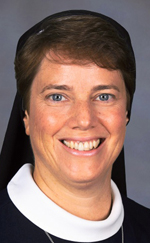 Born in Somerville, N.J., Sister Mary entered the Congregation of the Sisters, Servants of the Immaculate Heart of Mary in 1995 from Immaculate Conception Parish, Somerville, and professed her vows in 1998.

Sister Mary taught in elementary schools in the Archdiocese of Philadelphia, and served in Chile and Peru as a pastoral minister and religious superior. Her last assignment was at Villa Maria House of Studies as Directress of Novices for the I.H.M. Congregation.