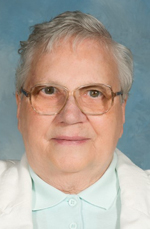 Daughter of the late Konstantin and Mary Karis, she was born in Philadelphia and attended St. Anne Grade School and Fleisher Vocational School in Philadelphia. She entered the Sisters of St. Joseph in 1947 and professed her final vows in August 1955.

Sister Mary ministered in the Dioceses of Arlington, Charlotte, Harrisburg and Trenton, and the Archdioceses of Philadelphia and Washington, D.C.

She is the sister of Joseph Karis and the late Konstantin and Edward Karis, Madeline Gavranich, Marie Hamill, Rita Karis and Eva McKee. She is also survived by nieces, nephews and members of her Congregation, the Sisters of St. Joseph, Chestnut Hill.