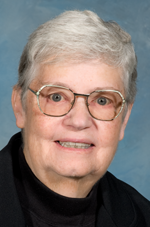 Born in Philadelphia, Sister Veronica entered the Sisters of St. Joseph in 1954 from St. Leo Parish, Philadelphia, and professed her final vows in 1962.

She ministered in the Archdioceses of Philadelphia and Washington, D.C. and the Dioceses of Allentown, Camden and Trenton.

She was the daughter of the late Charles and Grace Conner; sister of Joseph Connor (Rose) and the late Agnes Lomas; sister-in-law of Stephen Lomas. She is survived by nieces, nephews and members of her Congregation, the Sisters of St. Joseph.

The funeral Mass was celebrated Feb. 16 at St. Joseph Villa.

Donations in her memory may be made to Saint Joseph Villa, 110 W. Wissahickon Ave., Flourtown, PA 19031.

NEXT: Msgr. John Close, pastor with love for the elderly, dies at 74