Msgr. John Close, pastor with love for the elderly, dies at 74 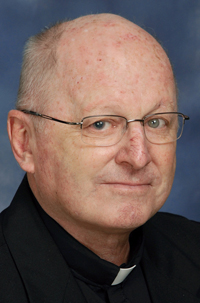 He was ordained May 17, 1969 at the Cathedral of SS. Peter and Paul by Cardinal John Krol and his first assignment was as parochial vicar at Christ the King Parish, Philadelphia.

It was during his administration at Wood that the boys and girls divisions merged and Msgr. James Beisel, who was a theology teacher there at the time, recalls Msgr. Close “had an enormous task to make the school a coeducational institution and he did a wonderful job at that.

“The hallmark of his administration was he really showed concern for the students of the school. All of his energy was focused on making the transition as easy as possible; trying to make new traditions, some of which, I believe are still in existence today,” said Msgr. Beisel.

While at Archbishop Wood, Msgr. Close was also the administrator for the newly established Regina Coeli Residence for retired priests. “He had a soft spot in his heart for the elderly priest who lived with him,” Msgr. Beisel said.

Msgr. Close also served as pastor of St. Michael the Archangel Parish, Levittown; vice rector for Institutional Advancement at St. Charles Borromeo Seminary; pastor of the Cathedral Basilica of SS. Peter and Paul, and in 2006 he was appointed pastor of St. Katharine of Siena, where he was named pastor emeritus in 2012.

Father Charles O’Hara first got to know Msgr. Close when they were students at St. James High, and their friendship remained.

“I knew John for a very long time,” Father O’Hara said. “He was a very good administrator and helped to organize the (1979) visit to Philadelphia of Pope John Paul II. He was prayerful and meditative and knew all of the ins and outs and had a grand sense of organization. He had a great heart and was always willing to respond with help if called.”

Lou Ferraro, a long-time cathedral parishioner and volunteer, especially remembers Msgr. Close for his competence as an administrator but also for his solicitude for the elderly.

“I saw that at first with my own Mom,” Ferraro said, “but he would walk over to greet anyone who was elderly or in a wheelchair. His face would light up and his countenance would change when he saw them.”

There will be a viewing for Msgr. Close at St. Dorothy Church in Drexel Hill on Monday, March 12 at 9 a.m. followed by his 11 a.m. funeral Mass celebrated by Bishop John J. McIntyre. Concelebrants will include Father Richard Maisano, Father O’Hara, Father Matthew Weber of the Camden Diocese and Msgr. Beisel, who will be the homilist.

Msgr. Close is survived by his brothers Richard F., Patrick J. and Robert Close; his sister Cathleen M. Skinner and nephews and nieces.

NEXT: Sister Laureen Discher, 98, dies after 80 years of religious service