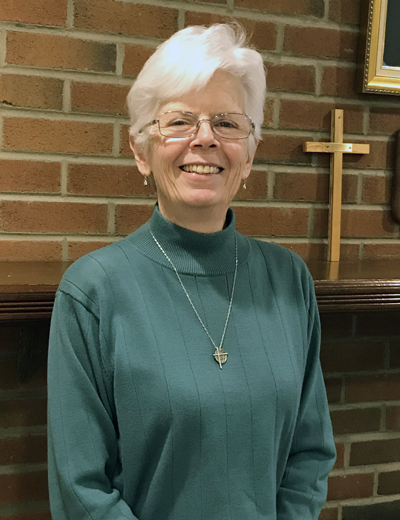 “Prayer,” St. John Chrysostom once wrote, “is the root, the fountain, the mother of a thousand blessings.”

Father Edward Hallinan, pastor of St. John Chrysostom Parish in Wallingford, knows this dictum full well, and so too does Sister Maria McCoy, S.S.J., who was recently hired by Father Hallinan to serve part-time in the newly created office of Parish Spiritual Director.

“The basic premise is that the parish should be a school for prayer,” Father Hallinan said.

He has known Sister Maria for many years, especially through her work in spiritual direction at the Jesuit Center for Spiritual Growth in Wernersville. “I used to go there for retreats and when I became aware that she was no longer there I reached out to her and asked her if she would be interested in trying parish life,” he said.

Many people do not have the time to go on a weekend retreat or even a day retreat, so Father Hallinan reasoned Sister Maria could give retreats and spiritual direction right in the parish. “It is something your average parishioner could plug into,” Father Hallinan said.

A first step would be to concentrate on the various ministries of the parish, and there are about 50 of them. Meetings of the various committees usually begin with prayer, of course, but that can be perfunctory and not quite what Father Hallinan had in mind.

Twice a year all of the ministry heads gather for a joint meeting and just recently Sister Maria conducted a mini retreat for them.

“I wanted the heads to realize whatever they do, if it is CYO or anything else, it is ministry,” Father Hallinan said.

Sister Maria herself grew up in Aldan, which like Wallingford is in Delaware County as is Archbishop Prendergast High School, where she attended and first met the Sisters of St. Joseph. The congregation’s members impressed her by their joy, and after graduation she joined them.

Her first assignments following formation were teaching in the elementary school grades at St. Callistus School in West Philadelphia and St. Thomas the Apostle School in Chester Heights. The congregation then sent her to Rome for a nine-month spiritual enrichment program living with sisters from many countries.

Her next assignments were as principal of elementary schools in New Jersey. Her focus on spirituality really took center stage when she was asked to serve as formation director for sisters who had made their first profession and were in preparation for final vows.

Meanwhile her own education was continuing. Adding to her undergraduate degree from Chestnut Hill College, she received a master’s degree in Christian spirituality from Jesuit-sponsored Creighton University in Omaha and finally a Doctor of Ministry from Lancaster Theological Seminary. Her dissertation was “The Interface of Ignatian Spirituality and Feminine Scholarship.”

Listen to Inside CatholicPhilly.com’s podcast on spiritual direction.

After eight years in formation work with her congregation she was asked to join the staff at Wernersville where she remained for 23 years.

There she facilitated training for spiritual directors in the Ignatian tradition. She also led retreats and workshops at the Jesuit Center and at a number of other facilities, including a 30-day retreat at the St. Joseph Sisters’ summer house at Cape May Point, New Jersey.

At St. John Chrysostom, Sister Maria sees her role as “deepening the people’s union with Jesus,” she said. “There is a call to holiness. God is reaching out to touch us.”

In the various parish ministries, “God is not just moving through them, God is reaching out to touch them,” she said. “They must ask, how is God reaching out to me for a deeper union with Jesus?”

In addition to leading retreats and workshops for the parishioners, ministers and staff she will serve on the Worship Committee and give guidance to the Adult Faith Formation Program.

There are many ways of praying, and Sister Maria urges those she counsels to “be who you are when you pray.”

For herself, in addition to the structure of retreats and personal prayer that she loves, “I take long walks and I find God in silence,” she said.

PREVIOUS: Good relations with lawmakers key to ‘vocation’ as lobbyist