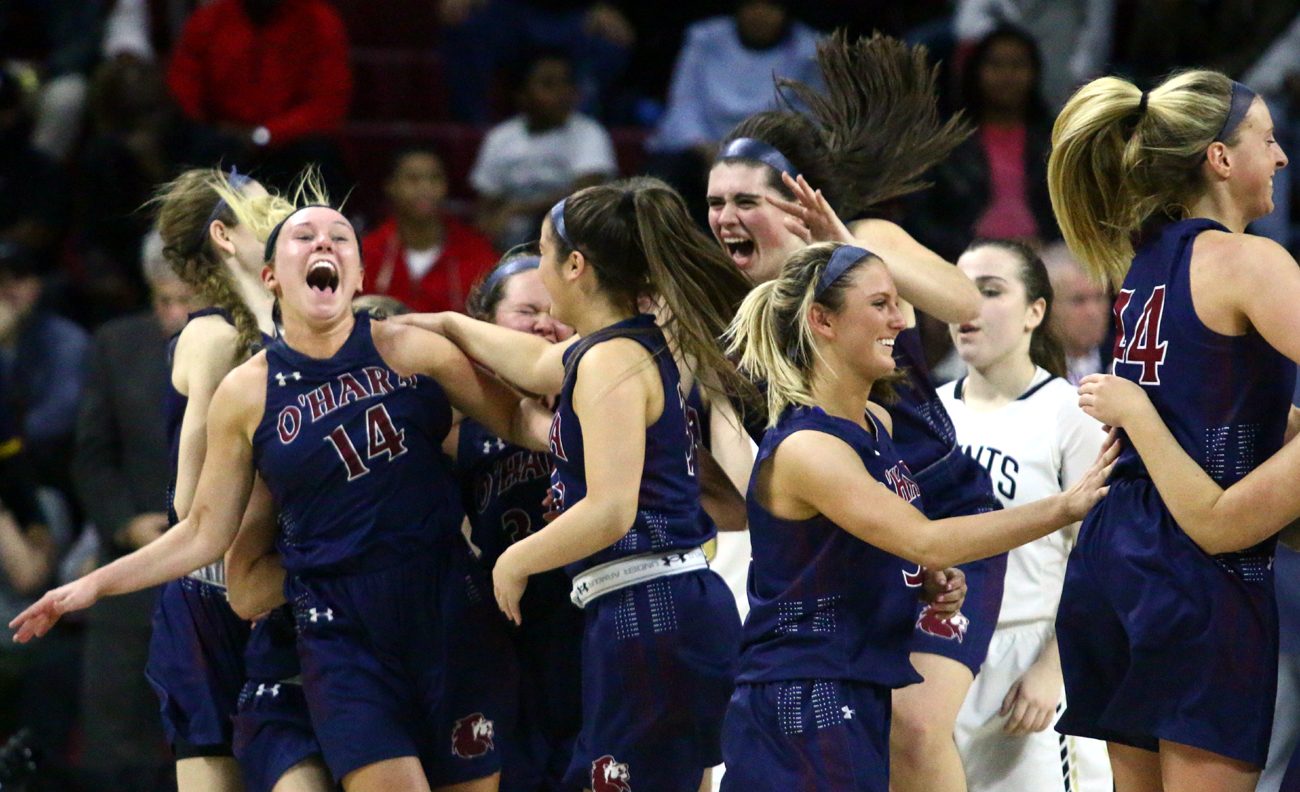 With time on the clock expired, Cardinal O'Hara's girls basketball team celebrates their second consecutive Catholic League championship after a 54-39 win over Neumann-Goretti Feb. 26 at the Palestra in Philadelphia. (Photo by Sarah Webb)

Cardinal O’Hara’s girls’ basketball team is preparing for the upcoming PIAA state tournament, but several players who engineered the Lions’ 54-39 Catholic League championship victory over Neumann-Goretti Feb. 26 at the Palestra were more than happy to reminisce about their second consecutive league title.

“The school’s atmosphere is like no other,” said Ricker. “O’Hara is truly a family and every teacher, faculty member and student will congratulate us on our hard work.”

First-team All-Catholic senior Kenzie Gardler said she would never tire of talking about her team’s accomplishments.

“I don’t think it will ever get boring because of everything we overcame this year, with being the underdog and surprising many people,” said Gardler, who scored 17 points and snared six rebounds in the championship game. “No one thought we could do it and we never let that affect us. We played our game, trusted our coaches and teammates, and executed everything pretty much perfectly.”

“Winning the PCL at the Palestra is probably something that will never get old or boring to talk about because it’s probably the best experience I’ve had in high school,” she said. “We still always bring up memories from last year’s PCL championship against Wood.”

Because it “wasn’t expected,” senior Emily Helms said, the title will always be considered more special.

“We were in third place and playing the number-one team,” said Helms. “We knew we could do it, but we also knew it would take everything we had to do it, and we did it.”

After a sensational 26-point performance, senior Maura Hendrixson recalls “hugging (Coach Linus) McGinty as me, Molly (Paolino), and Kenzie (Gardler) got subbed out in the fourth quarter knowing we won the Catholic League for the second year in an row.”

Senior Jasmin Miller basks in the reverie of the game’s final 30 seconds. “When Mr. McGinty subbed me, Emily (Helms), and Meghan (Ricker) in, at that moment, it started to really kick in that we won the Catholic League championship again,” said Miller.

Junior Kerry Patterson will always chuckle when recalling the game’s final half minute and the Lions being in the middle of a timeout. She also appreciates her team’s resolve after it fell behind, 30-21, late in the third quarter.

“The first thing I did was run up to Erin Welde, give her a high five, and say, ‘Me, Katie (Shallow), and Siobhan (Boylan) are running at you when we win this, so be ready!’” said Patterson. “And that’s exactly what Katie, Siobhan, and I did when the buzzer went off, even though Katie and Siobhan may have taken down Mackenzie on their way to Erin.

“We put it all on the court. We never gave up even when we were down by nine, and we went into the game with the mindset of winning the Catholic League for the second year in a row.”

Junior Erin Welde waxed nostalgic because her brother, Bonner-Prendergast freshman James, suited up for the boys’ championship against Roman Catholic that followed the girls’ clash.

“It is something we will share forever,” said Welde, “and I’m very happy to have experienced it with him.”

“As that was happening, my smile grew with each swish as I realized we were going to become Catholic League champions,” said Huseby. “I remember looking at the clock after the foul shots and telling my teammates, ‘Bring out the ladder. We’re cutting down this net!’”

NEXT: All-Catholic basketball teams named for girls’ and boys’ squads