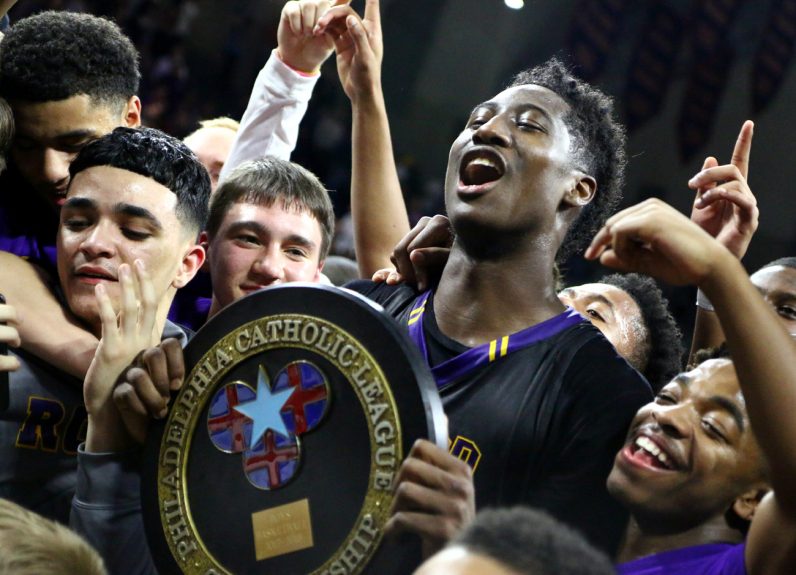 Senior Allen Betrand and his teammates celebrate Roman Catholic’s Catholic League championship after a raucous 51-49 victory at a sold-out Palestra in Philadelphia. (Photo by Sarah Webb)

When the basketball season began, Roman Catholic’s players and coaches rarely heard predictions that the Cahillites would ultimately capture the Catholic League championship.

No one doubted that the Cahillites were good — very good, in fact. But were they strong enough to dethrone defending champ Archbishop Wood? Could they speed past up-and-coming Bonner-Prendergast? And the ultimate question — could they defeat constant rival Neumann-Goretti?

“All I know is, we wanted to win no matter what,” said Roman senior John Kelly. “Anything less than a Catholic League championship would have ruined our season.”

Since they fashioned a 51-49 Catholic League title over Bonner-Prendergast Feb. 26 at a sold-out Palestra and started to prepare for the upcoming PIAA state tournament, the Cahillites have had some time to reflect on their school’s Catholic League-best 31st overall title and third in the past four years.

Junior Hakim Hart, who scored the game-winning basket off a tremendous feed from sophomore Lynn Greer III with 1.6 seconds remaining in regulation, recalls “everyone’s happy faces after the game. People (were) hugging each other everywhere after that final buzzer.”

After a 15-point, five-rebound effort, junior Seth Lundy reminisced about his three-point swish with 2:31 left that created a 48-48 tie.

“I remember how loud the gym got,” said Lundy, “and all the Roman fans were going nuts.”

“When I saw the ball go through the net it was the best feeling in the world,” said Betrand. “Knowing that everybody doubted us from the beginning and saying we were too small and we can’t play together and then proving everybody wrong felt so good.”

Although he did not produce eye-popping statistics, junior Louie Wild forged major havoc defensively. When the final horn sounded, Wild immediately sought an embrace from a very special man.

“It was the best feeling in the world hugging my dad (2000 Roman Catholic grad and current assistant coach Mike Wild),” said Wild. “That was a big moment for me because he won two Catholic League championships at Roman.”

Kelly said he could not help thinking about the naysayers.

“After we won, I felt that everyone who doubted us was shocked,” he said.

Up next is trying to capture the Class 6A state title. Imagine what people would say then.

NEXT: After girls’ Catholic League win, O’Hara’s hallways are buzzing