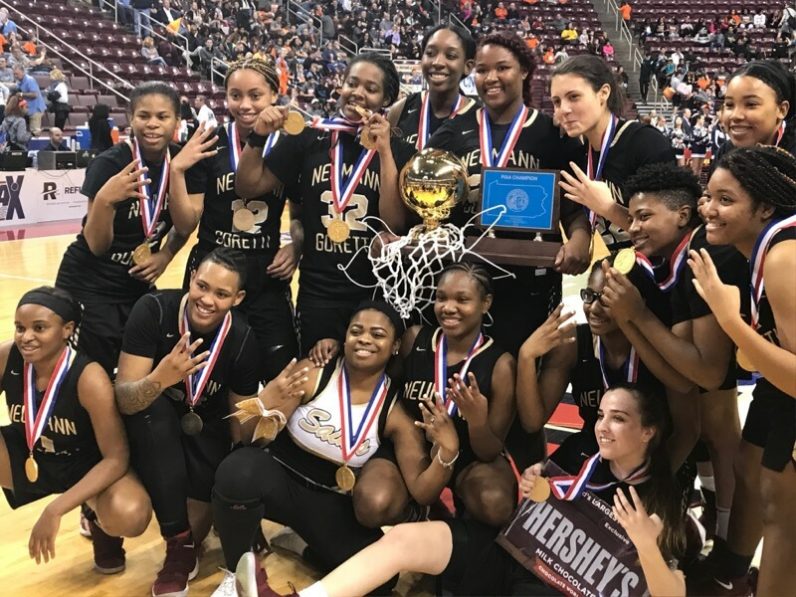 It wasn’t easy, but it wasn’t too difficult, either.

The District XII runner-up Saints dominated the second half, turning an entertaining 24-21 edge into a blowout by outscoring the District VII-champion Crusaders by 39-25.

“All season long, our girls have dealt with adversity,” said N-G coach Andrea Peterson. “They stayed together as a team no matter what the circumstances.”

Several players, as well as Peterson, admitted that losing the Catholic League championship to Cardinal O’Hara and then the district title to Imhotep Charter served as fuel to finish the season in glorious style.

The addition of sophomore Diamond Johnson, an early-February transfer from Virginia’s Phoebus High School and one of the state’s most dynamic performers, along with senior Catholic League Most Valuable Player Jabria Ingram, proved to be way too much for Bishop Canevin (24-5) to handle.

Coming off the bench to play 23 minutes, Johnson contributed 14 points, six rebounds, five assists, and three steals. Ingram was a force on defense with a career-high 10 steals to go along with nine points, five rebounds, and five assists.

“At halftime we talked about the need to step it up,” said Peterson. “They knew what to do. There are four quarters, not two; there are 32 minutes, not 16.”

Ingram, sporting a business-like demeanor during the post-game celebration, talked about losing in the Catholic League final.

“I don’t look back at the past,” she said. “That said, it definitely gave us a chip on our shoulders and helped motivate us. It feels really good to be the first to win four in a row at Neumann-Goretti.”

Among the four players who entered the game for the its final moments was senior Ameerah Godwin.

“I couldn’t be more blessed to be a part of this program,” said Godwin, who next season will play at Springfield College in Massachusetts. “Being on the floor at the end … it was still a shocker to believe we had just won a state championship. It’s my first one and I’ll never forget it.”