Examples of friendship in Scripture 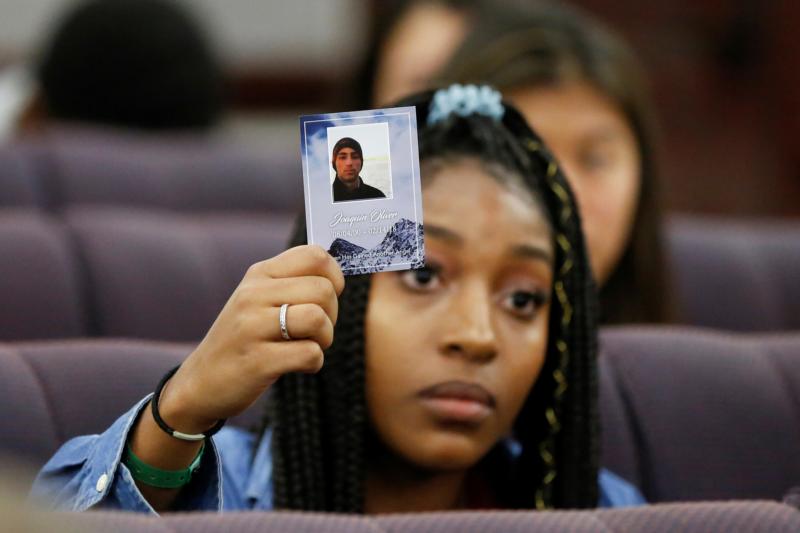 Tyra Hemans, a senior from Marjory Stoneman Douglas High School in Parkland, Fla., holds a photo of her slain friend Joaquin Oliver, killed Feb. 14 during a school shooting, as she and other students speak with Florida state legislators Feb. 20 at the Capitol in Tallahassee about gun legislation. In John 15:13, Jesus states that a friend is someone who is willing to sacrifice everything for his or her friends. (CNS photo/Colin Hackley, Reuters)

While the Bible describes some aspects of life such as love in great detail (1 Cor 13:4-8), one must search a little harder to see what Scripture says about friendship.

Proverbs 17:17 explains that friends are always loyal and always there to help in time of need. A friend is also someone who can offer criticism and counsel when it is needed, helping one to become a better person. “Do not give up your own friend,” states Proverbs 27.

In John 15:13, Jesus states that a friend is someone who is willing to sacrifice everything for his or her friends: “No one has greater love than this, to lay down one’s life for one’s friends.”

The Bible presents few examples of friendship. While the prophets Elijah and Elisha are often regarded as friends (2 Kgs 2), their relationship was more that of a teacher and a student rather than friends.

Another example of great love is that between Naomi and Ruth (Ru 1:16-17). While beautiful, this is more a relationship between a mother-in-law and a daughter-in-law. (Would that all such relationships were so loving!)

Jonathan was the oldest son of Saul, the king of the Israelites, and thus would ascend the throne when his father died. But then he met David, a young man who had saved the Israelite army by killing the Philistine giant, Goliath (1 Sm 17). Jonathan was in awe of David because of what he had accomplished and became a dear friend.

As 1 Samuel 18:1 describes it, “Jonathan’s life became bound up with David’s life; he loved him as his very self.” Jonathan gave David the royal cloak and armor as a sign of their friendship (1 Sm 18:4). As Saul grew jealous of David’s popularity, Jonathan protected David.

When Jonathan was killed in battle, David tore his clothes and wept in grief for his friend. David said, “I grieve for you, Jonathan my brother! Most dear have you been to me” (2 Sm 1:26).

Jesus had a close friendship with Mary, Martha and Lazarus — although the word “friend” isn’t used in the Gospels to describe the relationship. He visited their home and ate with them (Lk 10:38-42, Jn 12:2) on two occasions, which is something friends do.

John 11:5 describes just how close Jesus was to this family: “Jesus loved Martha and her sister and Lazarus.” When Jesus learned that Lazarus was ill, he braved being stoned to visit him (Jn 11:8). When Jesus heard that Lazarus has died, he “became perturbed and deeply troubled” (Jn 11:33) and wept (Jn 11:35), because that’s also what friends do.

Isn’t it good to know that we share in Jesus’ deep love and friendship, for he calls us his friends as well (Jn 15:15)?

Daniel S. Mulhall is a catechist in Louisville, Kentucky.

NEXT: Faith is the framework for true friendship