Holy friendship is ‘a remnant of paradise’ 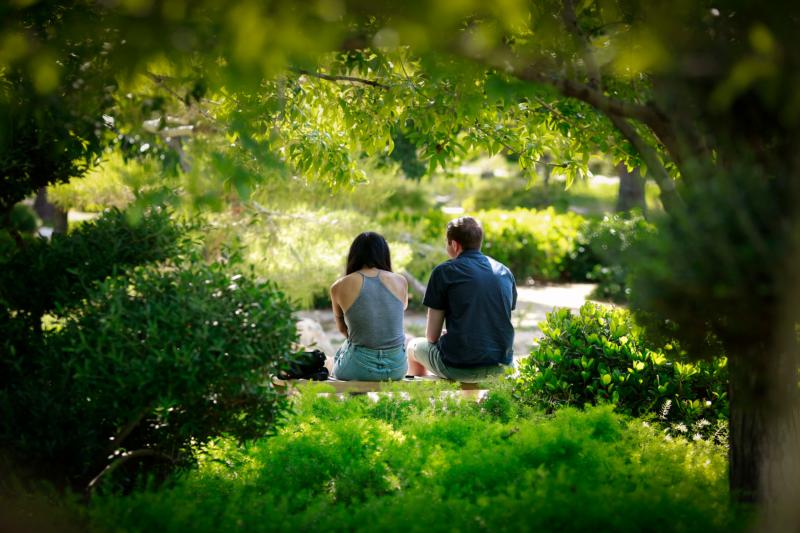 Two friends take advantage of a shady spot in the Japanese Friendship Garden in Phoenix. Even before the time of Christ, Aristotle wrote beautifully on the subject of friendship. Many are familiar with his insight that a friend is “a single soul in two bodies.” (CNS photo/Nancy Wiechec)

From the first moments of creation, God declared that “it is not good for the man to be alone” (Gn 2:18). Human beings long for companionship, for someone to relate to, someone to desire the best for. This is not only a yearning for romantic love; humans are made for friendship, and ultimately, for friendship with God.

Even before the time of Christ, Aristotle wrote beautifully on the subject of friendship. Many are familiar with his insight that a friend is “a single soul in two bodies.” Theological inaccuracies notwithstanding, it is an intriguing observation.

This last is the closest to what Christians would consider an ideal friendship, and it is certainly the strongest tie of the three types.

In the history of the church, there are many examples of prominent saints who were dear friends, and they can serve as guides to living out a virtuous and holy friendship.

One such example is found in St. Perpetua and St. Felicity. Perpetua was a Roman noblewoman, and Felicity was her slave. More than this, they were friends, and helped each other through the unimaginably difficult time of their persecution and eventual martyrdom in 203.

St. Ignatius of Loyola and St. Francis Xavier were two of the founding members of the Society of Jesus, and even lived together during their university studies.

Another striking example is the friendship between St. Basil the Great and St. Gregory Nazianzen, who lived during the fourth century in what is now Turkey. In one of Gregory’s surviving sermons, we find high praise of his friend Basil:

“Our single object and ambition was virtue,” Gregory wrote, “and a life of hope in the blessings that are to come; we wanted to withdraw from this world before we departed from it. With this end in view, we ordered our lives and all our actions. We followed the guidance of God’s law and spurred each other on to virtue. If it is not too boastful to say, we found in each other a standard and rule for discerning right from wrong” (Oratio 43).

There is much to learn about holy friendships in Scripture and the Catechism of the Catholic Church. Sirach states, “Faithful friends are a sturdy shelter; whoever finds one finds a treasure” (6:14).

A faithful friend is not merely one who regularly “hangs out” with us. We learn of the true scope of friendship from Our Lord: “No one has greater love than this, to lay down one’s life for one’s friends” (Jn 15:13). This advice, given to the apostles just hours before Jesus would be executed, is the gold standard.

We have been made friends of God through Jesus Christ, even after severing the friendship countless times throughout history. “I no longer call you slaves,” Jesus said, “I have called you friends, because I have told you everything I have heard from my Father” (Jn 15:15).

Still earlier in salvation history, the Ten Commandments give us a sense of how we are to live in relation to other people.

Jesus says the greatest commandment is to love God with all our heart and soul, and to love our neighbor as ourself. This is the essence of the Ten Commandments, and it says a lot about what we might think of as “holy friendship.”

The Catechism of the Catholic Church goes into greater detail, stating that our whole being should be oriented toward friendship with God:

“By his revelation, ‘the invisible God, from the fullness of his love, addresses men as his friends, and moves among them, in order to invite and receive them into his own company.’ The adequate response to this invitation is faith” (No. 142).

Humans were created and established in right union with God: “The first man was not only created good, but was also established in friendship with his Creator” (No 374).

In a 2006 essay, Alice von Hildebrand called friendship the “remnant of paradise,” something we should continually strive to return to.

As the catechism reads: “Revelation makes known to us the state of original holiness and justice of man and woman before sin: From their friendship with God flowed the happiness of their existence in paradise” (No. 384).

A truly virtuous and holy friendship is one in which the good of the other is willed above all and which encourages the practice of virtue and ultimately friendship with God. “Whether it develops between persons of the same or opposite sex, friendship represents a great good for all. It leads to spiritual communion” (No. 2347).

PREVIOUS: Faith is the framework for true friendship

NEXT: We are formed for friendship with God and with each other