‘Play reminds us of joy, the joy of the Lord’ 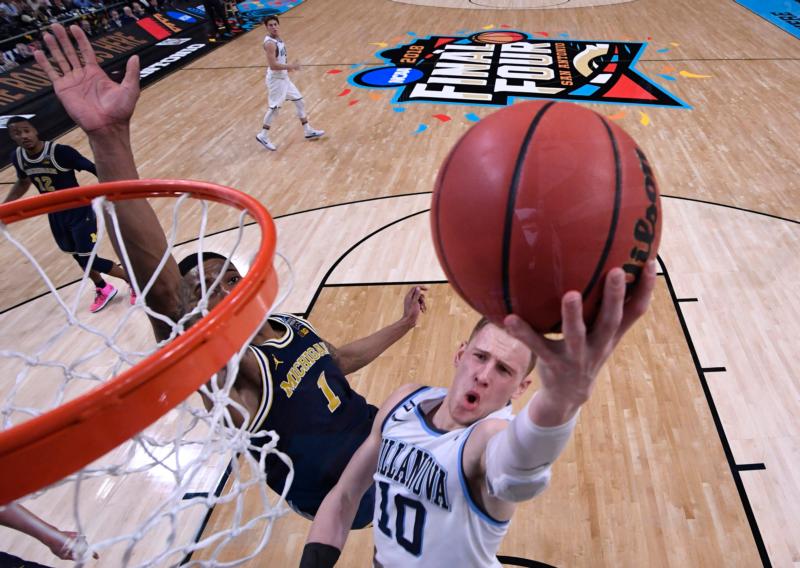 Michigan Wolverines guard Charles Matthews tries to defend a shot from Villanova Wildcats guard Donte DiVincenzo in the NCAA men's basketball championship April 2 in San Antonio, a game in which Villanova won its second championship in three years. Now that two Catholic schools, Notre Dame University and Villanova University, have won the Division I national championships in women's and men's basketball, perhaps it is time to give some thought to what difference a Catholic approach to sport makes. (CNS photo/ Robert Deutsch, USA TODAY Sports via Reuters)

Michigan Wolverines guard Charles Matthews tries to defend a shot from Villanova Wildcats guard Donte DiVincenzo in the NCAA men’s basketball championship April 2 in San Antonio, a game in which Villanova won its second championship in three years. Now that two Catholic schools, Notre Dame University and Villanova University, have won the Division I national championships in women’s and men’s basketball, perhaps it is time to give some thought to what difference a Catholic approach to sport makes. (CNS photo/ Robert Deutsch, USA TODAY Sports via Reuters)

Now that two Catholic schools, the University of Notre Dame and Villanova University, have won the Division I national championships in women’s and men’s basketball, perhaps it is time to give some thought to what difference a Catholic approach to sport makes. Such reflection will benefit not only Catholics, but the wider culture and sport itself.

The following are four themes from the Catholic heritage that can make a difference in how Catholics and others approach sports.

— Play is accepted in cultural expressions and taken seriously intellectually.

According to St. Thomas Aquinas, there can be “a virtue about games.” For him, virtue had to do with moderation. A person should not work or study all the time, but needs time for recreation, which play and games provide.

For Thomas, play is not merely the “pause that refreshes” so that the person can get back to work and be more productive. Rather, it is engaged in for its own sake. As he put it, “the only thing that is sought in play is the soul’s delight.” The enjoyment of play does have an end, however, and that is the restoration and re-creation of the human person.

Thomas’ thought had a significant influence on late medieval preaching about games and sport and on Catholic education up to the present. The “play ethic” of Thomas needs to be retrieved and developed in our time, as sports are increasingly regarded instrumentally as means to the end of money or prestige, and the play element is being marginalized or lost altogether.

— The human being is created in the image and likeness of God.

This understanding of the human being is the foundation for the emphasis in Catholic social teaching on the unity of the human family. The popes have emphasized that sports competitions provide the opportunity for people from different cultures, races and religions to encounter one another as members of the same human family.

Bishop Bernard J. Sheil, who founded the Catholic Youth Organization in Chicago in 1930, is a good model in this regard. In one of the most segregated cities in the United States, the CYO from the start welcomed athletic participation by all and provided a context for young people from different socioeconomic, racial and religious backgrounds to encounter one another.

Cardinal Blase J. Cupich has recently called for a revitalization of the CYO in Chicago as a way to bring young people of different backgrounds together and address discrimination, poverty and gun violence.

— The human being is a unity of body, mind and spirit.

Because the person is a unity, embodied activities such as sport necessarily affect persons at the level of consciousness — their making of meaning, understanding of themselves and their relationships with others. It will also affect them at the level of spirit, that dimension of the person that makes one capable of relationship with the Holy Spirit.

Educational institutions should provide opportunities for young people to reflect on how playing sports is affecting the way they understand themselves, their relationships with others and the meaning of their lives. The element of joy associated with play is particularly important to attend to with respect to their spiritual lives. As Pope Francis said, “Play reminds us of joy, the joy of the Lord.”

As it stands, most schools in the U.S. tend to operate out of a body-mind dualism, with athletics and academics having little or nothing to do with one another. We don’t typically ask young people to reflect on the embodied activities in sport that many of them are spending a great deal of time engaging in.

— The human being is social by nature.

We are meant to live in community and it is in the context of community that our gifts are recognized and called forth. When team sports are practiced within a Catholic institution where community values flourish, there can be a symbiotic relationship between sports participation and the educational mission of the school.

Villanova basketball coach Jay Wright points out that the Villanova mission statement says that the university seeks to reflect the spirit of St. Augustine by having “mutual love and respect … animate every aspect of university life.”

Wright said that this isn’t the sort of language one usually associates with a competitive athletic program. “But it is exactly these principles of love and respect, of compassion and serving others, that give Villanova a certain something special that sets it apart.”

Experiences of playing on a team with communal values can help young people to appreciate the importance of commitment to the common good and to persons who are excluded, discriminated against or living in poverty.

PREVIOUS: Sports and spirituality: Run so as to win

NEXT: Women, sports and spirituality