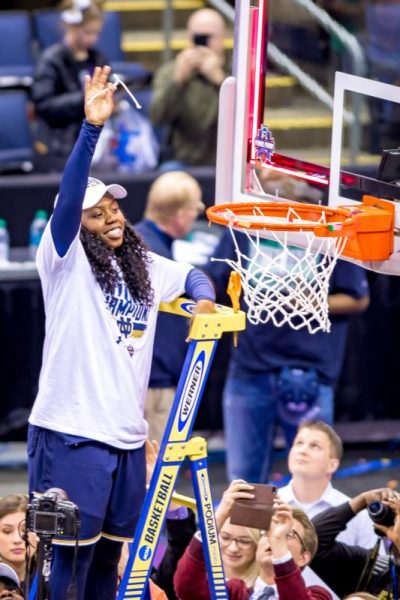 Two women dominated the craziness — Arike Ogunbowale of the University of Notre Dame and Loyola University Chicago chaplain Sister Jean Dolores Schmidt. Even for those who watch little national sports (Me!), it was difficult to avoid their stories. They showed confidence, strength and zeal and captured the nation’s attention when the men and their brackets usually rule.

“I can’t get over this past week in sports,” she told me. “Incredible! 2018 has been filled with memorable sports moments already.”

“I could talk about the shot for the next hour,” she said of Ogunbowale’s buzzer-beater that clinched the women’s NCAA title for the Fighting Irish. “It was great to see the excitement that day over Ogunbowale, and also with coach Muffet McGraw, who had her 800th win at that game.”

Did you know all the coaches for the Notre Dame women’s basketball team are women? I did not.

“Yep! That whole staff is women,” Stricherz said with pride. Women rising to the top in their game does not surprise her.

“Forty plus years of Title IX and we have many more women participating in sports. The talent level is high, and the more you dig in and look at women in sports, the better it gets.”

Stricherz coaches women’s golf and teaches in the theology department at St. Ignatius College Preparatory in the San Francisco Bay area. She grew up in a faith-filled family and sports was a huge part of life. Through the years, Stricherz took up running, tennis, swimming, golf and more. She was a rower for Notre Dame, and she’s coached several team sports.

All this led her to developing a course called Sports and Spirituality at St. Ignatius. The elective class examines Catholic spirituality through the lens of sports.

“It brings together my two passions,” she said. “It’s about how God might meet people in those domains.”

The Catholic coach said there are many analogies between spirituality and sport, and that spiritual growth has the same requirements as athletic growth. Both require discipline, practice, strength, community and even, at some point, a letting go.

For Stricherz, spirituality has that core Ignatian message of finding God in all things — after all she was schooled in Jesuit institutions and she teaches at one. It’s a spirituality that connects to everyday life.

“I utilize the analogy of sports to offer that connection to young people. I teach this way because sports is what they love, and they’re open to creative ideas. If we believe in finding God in all things that would not preclude the things that are important to us, like sports.”

Last year, Stricherz published a book to help individual players, coaches and athletic directors (the “shepherds of the shepherds,” she said) bring a spiritual dimension to their play and teams. “Pray and Practice with Purpose: A Playbook for the Spiritual Development of Athletes” gives 30 ways to pray with a team using athletics as a cornerstone for building community.

Her favorite suggestion is one she uses with the girls on the golf team.

“At the end of the week, we gather in a circle, join hands, and say the prayer of St. Ignatius. Then we go around the circle and each one says what they are thankful for, who needs our prayers and what was one ‘Wow!’ moment from the past week.”

The ritual opens communication, builds community and also lets the coach know what else is going on in the lives of the young women — things that might not have popped up during practice or competitions. It’s a moment of grace after a week of work, sweat and exhaustion.

Stricherz recalls one such prayer session that was a bit more intense than usual because of some weighty experiences shared by a few of the golfers.

“We never made it to sharing our wow moments. We just ended up in a big group hug,” she said. “That was our wow moment for the week.”

PREVIOUS: ‘Play reminds us of joy, the joy of the Lord’

NEXT: The logic of sports and life