The logic of sports and life 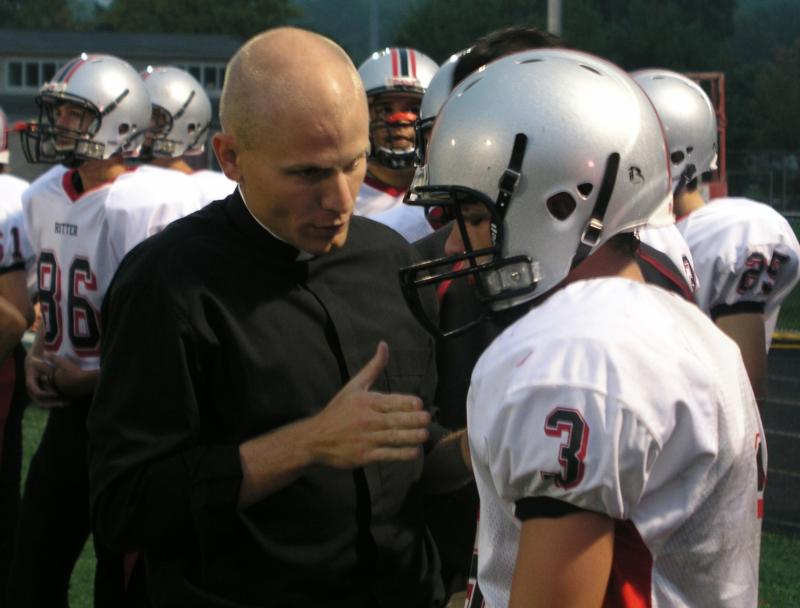 After a play during a 2009 football game, Father John Hollowell coaches Eddie Cmehil, a sophomore wide receiver and defensive back for Cardinal Ritter Junior/Senior High School’s varsity football team in Indianapolis. Sports and spiritual life resemble each other in notable ways that caught St. Paul’s attention in his First Letter to the Corinthians, in which he urged Corinth’s Christians to “run so as to win,” an image of athletes training for the ancient Isthmian Games. (CNS photo/John Shaughnessy, The Criterion)

Sports and spiritual life resemble each other in notable ways that caught St. Paul’s attention in his First Letter to the Corinthians (9:24-27).

In the back of Paul’s mind when he urged Corinth’s Christians to “run so as to win” was an image of athletes training for the ancient Isthmian Games, held in alternate years on Greece’s Isthmus of Corinth.

Winning was everything in these games; there were no second- or third-place awards. Without disciplined, demanding training, the athletes — wrestlers, long jumpers, chariot racers and numerous others — were unlikely to achieve their dreams. “Every athlete exercises discipline in every way,” Paul observed.

Paul’s discussion briefly mentioned the great demands of his endeavors to spread the Gospel far and wide. He drew upon his image of the training the games required. “I do not run aimlessly; I do not fight as if I were shadowboxing,” he said. “No, I drive my body and train it, for fear that, after having preached to others, I myself should be disqualified.”

Few 21st-century heirs to more than 2,000 years of Christian thinking will be surprised that Paul thought it made sense to prepare to meet the demands of Christian life, to get into condition, so to speak, perhaps through prayer, reading, discussion and participation in the Christian community’s life. God, after all, is not a magical power to take for granted.

Indeed, there can be times when Christians must ready themselves to live faith under adverse circumstances.

The fact that Paul recognized parallels between the stadium athletes’ disciplined preparation and that undertaken by Christians does not mean he failed to recognize their differences. The athletes of the games prepared “to win a perishable crown,” a wreath actually made of wilted celery. But Christians sought an “imperishable” crown.

Or, as St. John Paul II noted in an October 2000 speech, Paul’s “metaphor of healthy athletic competition” has a way of highlighting “the value of life, comparing it to a race not only for an earthly passing goal, but for an eternal one. A race in which not just one person, but everyone can be a winner.”

Human growth and development do not tend to come easy, certainly not over the long term. In sports and in all of life, it is safe to say with St. John Paul that “without sacrifices, important results are not obtained”; dissatisfaction takes root.

In other words, close observation reveals that sacrifice, commitment and, yes, elements of suffering are inherent to achieving honorable goals and advancing in human maturity.

St. John Paul urged every Christian “to become a strong athlete of Christ, that is, a faithful and courageous witness to his Gospel.” This, he said, requires perseverance in prayer, training in virtue and following “the divine Master in everything.”

In this, he suggested, the wisdom of Psalm 126 is pertinent: “Those who sow in tears will reap with cries of joy.”

NEXT: Holy smoke — must a church use so much incense?