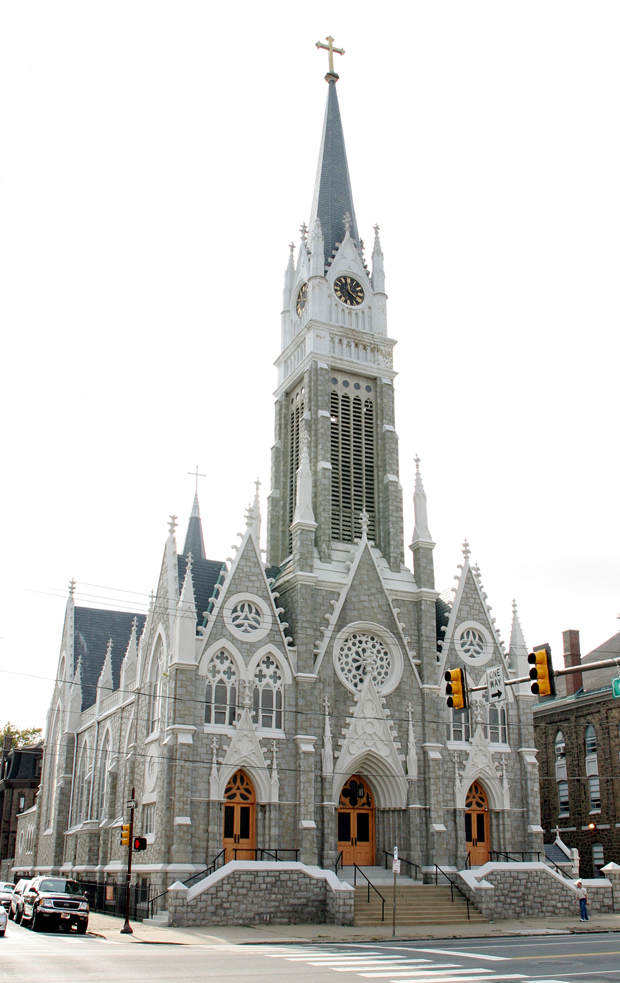 Our Lady Help of Christians Church in Port Richmond, Philadelphia.

The writing was already on the crumbling walls of Our Lady Help of Christians Parish, Philadelphia, when the parish merged in 2016 with Nativity B.V.M. Parish. Although designated a worship site, unless a half-century-old trend reversed, OLHC might not stay open as that for much longer.

That foreboding was realized last weekend when the Archdiocese of Philadelphia announced the church will close effective June 4, according to a statement issued Sunday, April 29.

Originally the spiritual home of German Catholics in the working-class Port Richmond section of the city, the high spire of the Gothic castle-like Our Lady Help of Christians graces the row-home skyline along with two other similarly imposing Catholic churches, the territorial Nativity Parish just a block away and St. Adalbert Parish a few blocks farther down Allegheny Avenue.

The area composed of the river wards in lower Northeast Philadelphia along I-95 and the Delaware River once teemed with Catholics flowing from Europe and into the factories of the neighborhood, where they sacrificed to build communities crowned by grand churches.

The German Catholics that Our Lady Help of Christians was built to serve have long ago assimilated into the wider culture and largely moved out of Port Richmond. At the time of the parish’s merger two years ago, it no longer celebrated a Mass in German among its two weekend Masses for 278 people, according to the October 2015 attendance count.

As is standard procedure with all parish mergers in the archdiocese, when OLHC merged with Nativity, all of the former’s real estate holdings, assets and debts transferred to Nativity. The artistic and architectural value of OLHC might be priceless but its debts proved costly.

Keeping up with “ongoing and deferred maintenance” for OLHC’s large buildings, which include a vacant school, convent and rectory along with the church that is used only occasionally, has “placed a significant financial strain” upon Nativity Parish, according to the archdiocesan statement.

During the first six months of 2017, Nativity Parish spent more than $100,000 for needed restoration work on the Our Lady Help of Christians Church. That contributed to a burgeoning deficit of $140,000 for Nativity Parish in the 2017 fiscal year.

In the current fiscal year the shortfall continues to worsen, already growing to $20,000 by the end of last March.

As of the end of February 2018, Nativity is maintaining a debt service exceeding $2.6 million.

“Because of the significant financial burdens experienced by Nativity of the Blessed Virgin Mary Parish, coupled with the underutilization of the Our Lady Help of Christians Church building, the most prudent course of action for the viability of the parish is the relegation of the worship site,” the statement read, using the canonical term to indicate the church is relegated to a non-Catholic usage by a future buyer.

Nativity B.V.M’s pastor, Father Dennis Fedak, following standard procedure made the formal request to close the worship site together with Nativity’s parish pastoral and finance councils. The archdiocesan Council of Priests reviewed the request and presented it to Archbishop Charles Chaput, who after his review made the final decision.

The closure of Our Lady Help of Christians was announced at all parish Masses of Nativity over the April 28-29 weekend. It is the latest development in the pastoral planning process begun in the archdiocese in 2010, and the latest result of reorganization for the Catholic community in Port Richmond announced in early 2016.

NEXT: Couples young and old celebrate wedding anniversaries at cathedral