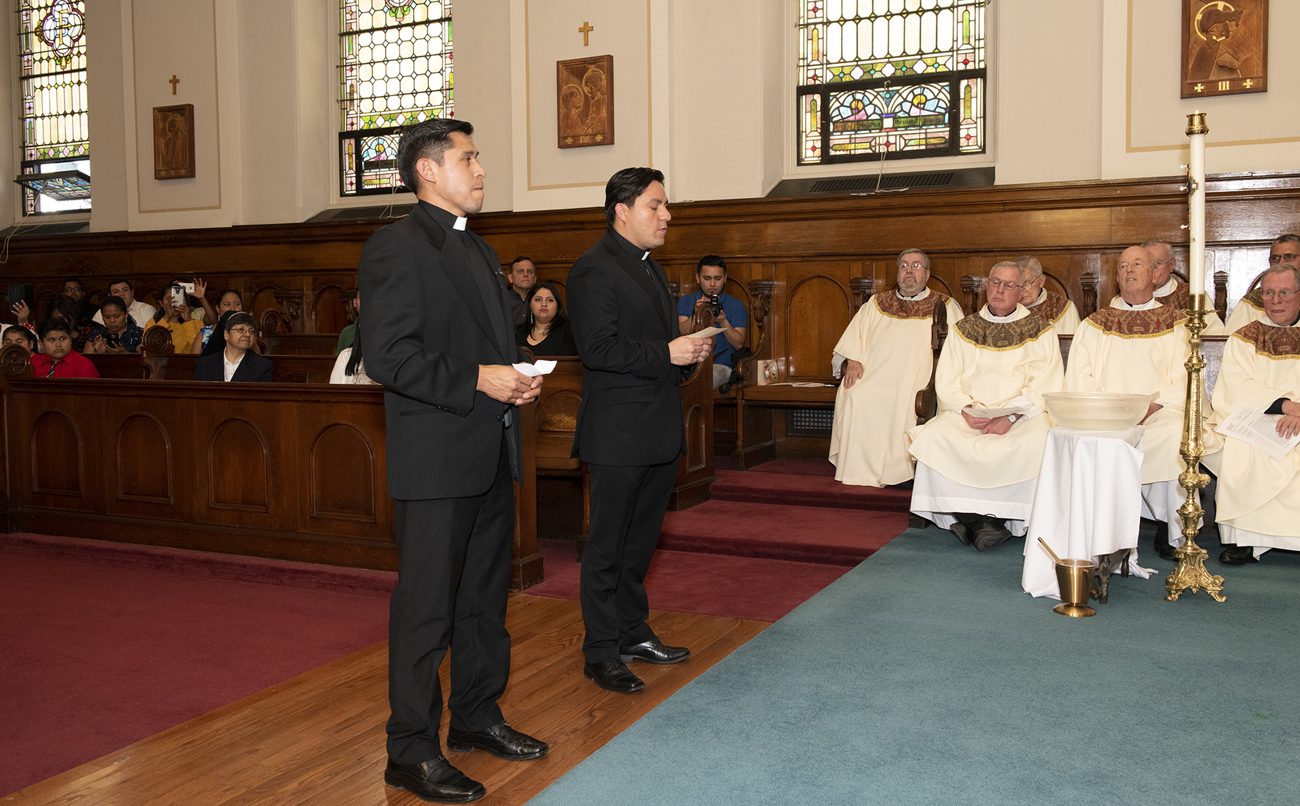 Leo Tiburcio (left) and Luis Romero profess their final vows to clergy of the Congregation of the Mission at a Mass April 13 in the Community Chapel at St. Vincent’s Seminary in Germantown, Philadelphia. Both men will be ordained deacons May 26 and expect to be ordained priests next year.

Two seminarians for the Congregation of the Mission (Vincentians), Leo Tiburcio and Luis Romero, professed their final vows April 13 in the community chapel at St. Vincent’s Seminary in Germantown, Philadelphia.

In keeping with Vincentian tradition the vows were taken before the altar of the Blessed Virgin Mary and received by Father Stephen Grozio, C.M., provincial of the Eastern Province of the Congregation for the Mission.

The vows are a prelude to another ceremony. On May 26 the two men will be ordained deacons at the nearby Miraculous Medal Shrine with ordination to the priesthood set for next year.

Tiburcio, 41, is originally from Puebla, south of Mexico City. He was living in Charlotte, North Carolina and working as a cook when he first encountered the Vincentians 14 years ago.

“They were working with the Hispanic community there,” he remembers. “I was working as a cook and I was looking for a place to discern for the priesthood. I was impressed by Father Vincent Finnerty who was a Vincentian priest at the church where I was going. I saw how busy he was and how happy he was, and he suggested I become a Vincentian. That was 11 years ago, and I never expected to find the happiness and peace I have now.” 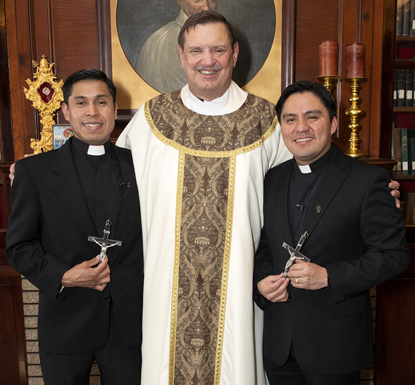 Vincentian Father Stephen Grozio (center), provincial of the Eastern Province of Congregation of the Mission (the Vincentians), stands with seminarians Leo Tiburcio (left) and Luis Romero, who professed their final vows in the order on Friday, April 13.

Romero’s experience was remarkably similar. Now 33, he is originally from El Salvador but was working in a factory in Queens, Long Island, when he first encountered the Vincentians through Bishop Alfonso Cabezas, C.M., bishop emeritus of Villavincencio, Colombia. Bishop Cabezas usually celebrated the Spanish Mass at Romero’s church.

“He was very humble and open to the people,” Romero said. “I was struck by the simplicity of life and identity of the poor, and I wanted a life of service,” he said. “Now I am very happy to be a Vincentian.”

Actually it is Bishop Cabezas who will ordain Tiburcio and Romero as deacons on their way to priesthood.

The fact that they are a former cook and factory worker may be especially appropriate close to the Easter Season. The very last encounter of Jesus with his apostles related in the Gospel of John, Chapter 21, has Simon Peter and six companions fishing in the Sea of Tiberias while Jesus himself is roasting fish on the seashore.

PREVIOUS: At St. Vincent Parish in Richboro, they’re giving gladly to the poor