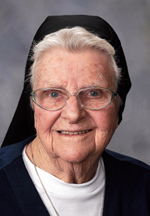 Sister Agnes Frances taught in elementary schools in the Archdiocese of Philadelphia and in the Dioceses of Arlington and Metuchen, N.J.

Before her last assignment to the Apostolate of Prayer in Camilla Hall, Sister Agnes Frances served for many years in hospital ministry at Thomas Jefferson and Frankford Hospitals.

The funeral Mass was celebrated at Camilla Hall on April 2. The celebrant and homilist was Father John O’Hara and the concelebrants were Father Daniel Swift, Father John Kolodziej, O.S.F.S. and Msgr. Joseph Logrip.

In addition to her congregation, Sister Agnes Frances is survived by her sister, Mary Katherine Meisner, and many loving nieces, nephews, grandnieces and grand-nephews.