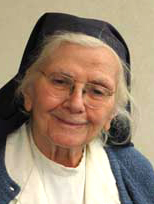 Sister Margaret Naab, S.H.C.J., died Monday, April 2 of heart failure at age 96. She was a Sister of the Holy Child Jesus for 75 years.

Sister Margaret entered the society in 1940, made her final vows in 1947 and became well known by the religious name Mother Mary Alacoque.

Throughout her 75 years as a Holy Child Sister, Sister Margaret lived fully and contributed generously. A gifted artist from a family of artists, she never believed that art should be a private subject. Seeing beauty everywhere, she taught art, studied it, encouraged young artists and even opened an art studio at West Catholic Girls High School, her alma mater. From her studies and visits abroad, she returned with images to share with others, including audiences that extended beyond the Holy Child Sisters.

In 1970 Sister Margaret was the first woman invited to teach at St. Charles Borromeo Seminary in Wynnewood, teaching Christian art in the Theology Division. For more than two decades, she was an inspiration to young seminarians, who frequently kept in touch with her even after their ordination.

In later years her outreach included St. Thomas of Villanova Parish, Rosemont, as well as an inner-city program for feeding the homeless at Old St. Joseph Church.

Sister Margaret received a Bachelor of Arts degree in history from Rosemont College in 1949 and a Master of Fine Arts from Catholic University of America in 1959. She also took several post graduate studies in art in several countries.